A couple of days after tackling Thymadheri I headed for Vounos, the highest of the three peaks and a huge rocky mass backing the bay at its easternmost end  (left in the photo below).  This time, rather than incorporating it into a long circular walk and going up the sloping shoulder from the same col as Thymadheri, I chose the direct approach, the diretissimo  as Italian alpinists would call it.

The mountains backing Livadia Bay, Vounos on the left

First, a saunter part-way around the bay, then along a path and track up a deep valley with a monastery at the end, up a rough path to the small church of Agios Pavlos nestled under a rocky crag, a thin, steep path up the side of the crag to a small deserted settlement, and finally strike straight up the slope to the top.  On the final section there were odd bits of path used by goats but wherever possible I climbed the rock to keep out of the thorn scrub.

looking towards Agios Pavlos and the top of the mountain 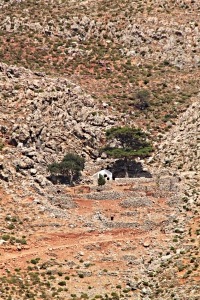 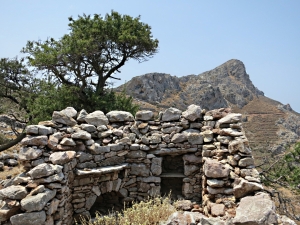 The deserted settlement above Agios Pavlos with another perspective on Thymadheri

I look forward to seeing snakes on the islands but this visit didn’t see any.  However, on my clamber over the rocks I came across a snake skin stretched where the snake had sloughed it.  It was about 2 feet long and just over 2 inches in diameter …. so it’s clearly bigger than that now.  It was alongside a snake-sized cleft in the rocks which I was tempted to explore but didn’t in case I came across the sharp end.

The top of the crag was made up entirely of large, razor-sharp limestone boulders with thorn scrub between but I found a reasonably comfortable rock to perch, eat my banana and enjoy the views before chasing precariously around like a lunatic trying to photograph dragonflies and butterflies which taunted me by waiting until I crept close and then flitting across to the next piece of scrub.

Following complaints that all the photos ‘on the edge’ are of my right foot, I thought fans might like to see both

I dropped back into the col but decided to go back to the coast via Agios Pavlos, the way I came up, because it’s a more fun path.  The beach this time, both start and finish, was that at Livadia.  Very good apart from there being people there! It meant I had to wear my swimming trunks.  Outrageous!!!!!