A Welsh Spring and clichés of violence

Back in Wales and spring has at last arrived.  Before I left Arctic blasts whipped across the tops of the mountain ridges dumping snow and lowering temperatures so that buds stayed tight shut long past their usual seasonal opening time.  During the short time that I was in Greece there has been an explosion of growth, leaves have erupted fresh-green from buds, blossom has burst open and hedgerows are a riot of colour.

Plants wait for environmental triggers – temperature, rainfall, sunlight – so prolonged winter means delay, queues form and then everything happens at once with dramatic if short-lived effect.  Bees are immobile at temperatures below 7-10oC (depending on species) and are most active at 20-22oC so when temperatures finally rise and blossom opens all at once pollination finally gets underway with a vengeance and it’s dynamite for fruit production.  In the garden I already have a heavy set of red and black currants and gooseberries and I’m hopeful of a bumper apple crop. 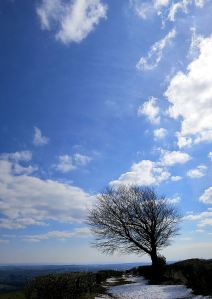 The ridge-top path before I went to Greece … 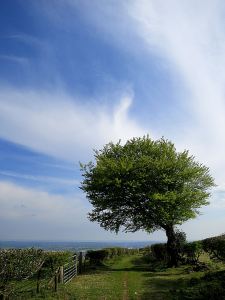 … and when I arrived back 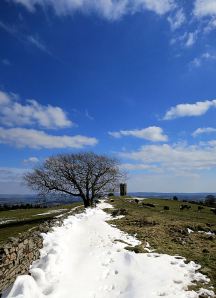 The Folly Tower before I went to Greece …. 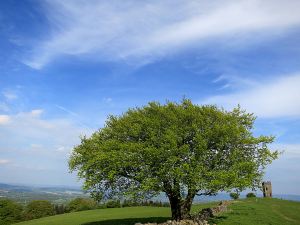 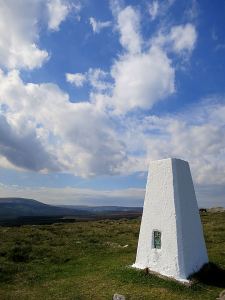 I gave the ‘White Stone’, as Mynydd Garn Wen is known locally, a fresh coat of paint 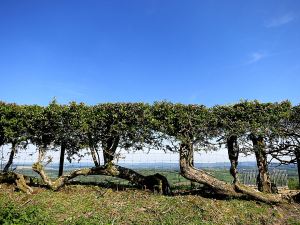 Hedges were once properly ‘laid’ but are now scalped once a year by machine, stock control achieved by wire fencing 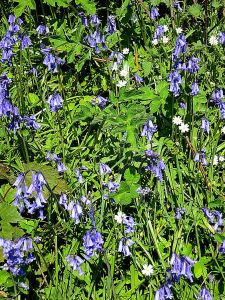 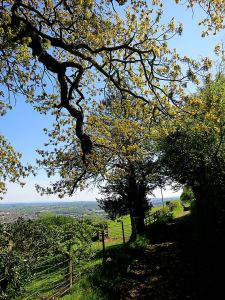 A digression from rambling in the mountains to verbal rambling .  Have you noticed that many of the clichés of description are words of violence?  Blast, whipped, dump, explosion, burst, riot, trigger, vengeance, dynamite …. to list just the few I used above.

I mention this as  a follow-on thought from the  hypothesis that I tested in the last post on the blog, namely that using ‘explosives’ and associated words as tags significantly increases the number of hits on the blog.  Since I started writing about the recreational use of explosive devices on Kalymnos the hits on the blog have increased dramatically.  After the last post the blog has had the largest number of hits in one day since I began writing it 4 years ago, the average daily total of hits has doubled or even trebled, and the monthly total of hits exceeded the previous highest with more than a week still to go.

This could be interest in the island of Kalymnos, and if it were it would be good sign for the island’s economy, …. but I suspect not.

I find it sad that people resort to violence to achieve their political/religious/monetary/life-style ends but in some ways I find it even sadder that there is such an avid and widespread interest in violence.  This is clearly evidenced by films, TV documentaries, newspaper features …. but that is another story and one that I find too depressing to tell.