I was unusually apprehensive setting out for the mountains on Wednesday.

Since I arrived in Greece towards the end of April the weather had been hot and sunny, more so than might be expected for early summer when it can be ‘unsettled’ even in the Dodecanese.  Skies had been virtually cloudless, afternoon temperatures around 25oC, rarely below 15oC overnight.  Very comfortable, very pleasant but the trek to the top of the mountain on Tuesday had been tiring, I was relieved when I sat down at the end.

The walk I planned for Wednesday was a final challenge before heading home on Thursday.  It would only be about 12 km but I knew it would be hard work, crossing the main ridge of the island from Chora, dropping down to the floor of the Vathys valley and then recrossing the ridge to Pothia, the island’s main harbour.

The cloud that greeted me when I opened the door to the balcony on Wednesday morning was unexpected.  As a heliophile (‘sun lover’ from the Greek ‘ήλιος’ – sun and ‘φίλος’ – friend or lover) it was initially a disappointment.  I would have liked sunshine for my last day but on reflection it was not entirely unwelcome.  I was conscious of both my lack of fitness and lack of acclimatisation to the heat. The abnormally long 2012-13 winter in the UK, with snow and below-freezing temperatures continuing until mid April, barely a week before I left, meant that I was far less prepared physically than in recent years.

I had worked out a rough timetable for the walk. An hour to the top of the first col1, 2 hours to negotiate the flank of the mountain down to the valley floor and along to the return path, an hour to the top of the next col and an hour from there to Pothia.  I had a 7 hour time-slot between buses so that gave me a two-hour margin for error and held out the prospect of a beer on the harbour side if I kept to time.  I reckoned that I might need the two hours not just because of my lack of fitness but also the problem of route-finding.

The path up the gorge to the top of the col is rough but well marked because it is the start of the way to the top of Profitis Ilias where there is an annual celebration on 20 July, attended by half the population of the island so one guy told me.  Somehow I doubt that estimate.  but at least the path has to be fit for church dignitaries in their regalia.  It was a steady pull to the col and despite stops for photographic opportunities it took exactly an hour.  On target so far. 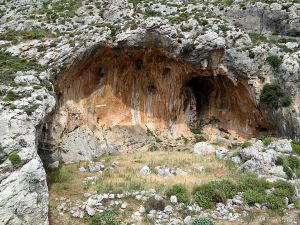 One of the cave remnants in the gorge

Looking back down the gorge 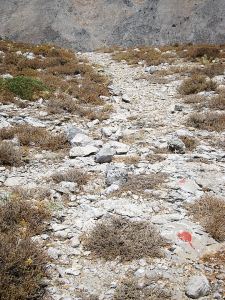 The top of the col

Even though from the col it was downhill to the valley floor the next section was the longest and most difficult part of the walk.  Once passed the turn off to the top of Profitis Ilias, the route degenerates to no more than a goat path.  Obvious in some places, especially where it reaches a fence and so has to go through a Greek Gate, much of the upper section of the path is very difficult to find as it zigzaggs narrowly downwards, negotiating gulleys and scree.  Thankfully Red Spot Man had been busy fairly recently and small, fresh-painted red dots about 2cm across confirmed periodically that I was indeed following the preferred route.  On a couple of occasions I had to cast around to find the continuation but no real problems. 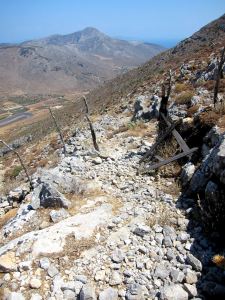 The start of the downhill path. Once through the Greek gate it degenerates to a goat path, in places barely discernible 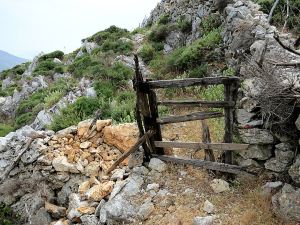 Another Greek Gate at the top of a steep gully

It was something of a relief to reach the track on the valley floor at the end of the path and to be able to get into a steady stride and set a good pace for half an hour. In estimating the time I had allowed for the difficulty of route-finding and was pleased to find that I had 10 minutes in hand. 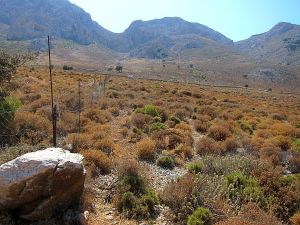 Unfortunately I lost that time scratching around to find the beginning of the path back up the mountain but that only put me a few minutes behind target.  The route to Pothia was the ‘Italian Path’, so called because it was built during the Italian occupation of the Dodecanese.  Probably one of the best paths in the Aegean, it is very well engineered to give a comfortable gradient, much of it rough-paved in limestone.  The long climb to the top was tiring after 4 hours of non-stop walking but I reached the col more or less on time.

It was now 14.00, my bus was at 17.00 and it was an hour downhill on a clear, well surfaced path.  So I took advantage of a plank in the lee of a stone wall to sit for half an hour, eat a banana, dried apricots and almonds, admire the view and just revel in being in the mountains.  I nostalged. 2

Relaxing in a taverna on the harbourside in Pothia at the end of the walk, resting tired muscles, my ears were once again assaulted by explosions. Nowhere near as numerous as on Tuesday but still the odd ‘thump’ of dynamite.

I mused idly whether these explosive devices are ‘bombs’.  They would certainly come within the dictionary definition of “a container filled with explosive or incendiary material designed to explode” (abbreviated from the Oxford English Dictionary).  Ignoring the complication of differentiating bombs from fireworks and non-explosive bombs such as pyroclasts (volcanic bombs), there is an implication that a bomb is intended to do harm to people or property and this certainly does not apply on Kalymnos.  The fact is that to Kalymnians throwing dynamite is purely recreational.  The larger and more numerous the explosions, the greater the fun.

Apart from the fascination of the practise, I mention this again to test the hypothesis that using ‘explosives’ as a tag significantly increases the number of hits on the blog.  From the interest which the last two posts have aroused I half expect shoe-bombers coming to look for supplies or MI5 to knock on the door and search the garden shed.  Don’t waste your time guys.

2  ‘to nostalge’  a new verb introduced to the language last year :
https://barryh2.wordpress.com/2012/06/27/areopoli-last-day-in-the-mani-a-grumble-about-footpaths-and-a-new-word-for-the-language/