Travels in Greece by bus: planning a gorgeous time.

As I rambled on about in the last post on the blog, the first part of the plan for the coming summer in Greece is to spend Easter on Kalymnos, one of the larger islands in the Dodecanese.  Apart from a brief visit to Symi en route, the intention is that I will spend 3 weeks exploring the mountains, swimming and relaxing.  I also hope to spend a serious bit of time getting on with turning the blog of last year’s travels into an e-book.  The first trip is now barely a week away and the 14-day weather forecast is for 20oC and sunny.

I have been working on the planning for the second trip of the summer which will be very different.  Another road trip by bus with the intention of getting into the mountains.  Literally gorgeous.

After flying to Athens for a day or two the intention is to take a bus along the north coast of the Peloponnese via Corinth to Diakofto and then take the rack-and-pinion railway up the Vouraikos Gorge to Kalavryta, a ski resort in the mountains.  The original intention for going to this area was to look up the family of a Greek guy who I met in Banff when I was in Canada earlier this year, with a day trip on the railway if time permitted.  As I read more about the area the basis of the plan began to change and a longer visit is now likely as I’m thinking of staying in Kalvryta and exploring more of the gorge and the surrounding mountains.

Already I can see the beginnings of what happened last year when I added more things in to the original plan with the result that I only got about half as far as I intended.

From Diakofto I’ll head via Patras down to Kalamata to take a look at the lakes and waterfalls of the Polilimnio Gorge in Messinia.  It seems to be a mellower landscape but the gorge should be worth a visit.  I may have to resist the temptation to travel more widely in Messinia in order to focus on the ‘gorge’ theme.

Then over to The Mani, the central of the 3 peninsulas in the south of the Peloponnese to do some walking in and around the Viros and Noupadi Gorges as well as climbing some of the peaks in the Taygetos Mountains.  I spent nearly a month in this area last summer but got nowhere near exhausting its potential.  One way of making sure that I get to places I didn’t last year is to hire a car

Assuming that I haven’t been sidetracked too much I then hope to cross from Geithio to Crete to walk the Samarian Gorge and some of the other gorges in the west of that island. 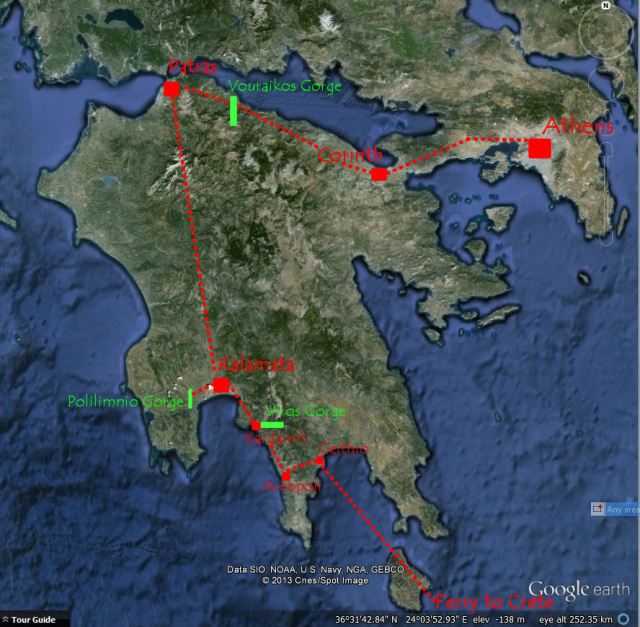 The planned route in the Peloponnese

I’ve booked a flight out but not back as I don’t know where I’ll end up or when I will be ready to return.