Apologies for the blog-free zone.  I’ve been in Whistler since Saturday, skiing every day on either or both of Whistler and Blackcomb Mountains.  But I’ll come to those another time.  I couldn’t leave Banff behind without giving some impressions of the town.

In the eponymous National Park, Canada’s first, it maintains a ‘frontier’ atmosphere while catering for an up-market clientele in terms of hotels, shops and restaurants.  It has the character of a ‘real’ town though I guess it wouldn’t have a raison d’être without the tourist trade but strict limits are placed on that by the National Park Authority in order to limit its growth and its environmental impact.  Busy in winter with people coming for the snow sports by all accounts it is far more manically busy in the summer with those coming for summer mountain sports or just passing through on an itinerary between Calgary and Vancouver.

Cascade Mountain, dramatic backdrop along the length of Banff Avenue

The sweet shop on Banff Avenue, perhaps the biggest selection of sweets I have seen anywhere. Shame I don’t eat sweets.

It partly owes its thriving tourist trade to the fact that it lies on both the spectacular Trans Canada Highway and the (so I’m told) equally spectacular railway across the Rockies.  The Trans Canada Highway cuts right across wildlife migration routes and so is furnished with bridges and underpasses and, within the National Parks at least, is fenced on both sides.  Any winter treatment is with gravel and not salt as that would attract animals by providing a linear salt-lick.  Even so there is concern that animal deaths on the road are increasing and so consideration is being given to installing electric wires across the top of fences or electric mats at their base.1

Castle Mountain. one of the notable features on the Trans Canada Highway

One of the wildlife corridor bridges over the Trans Canada Highway

The railway line is much used by freight trains which, when you are standing at the side of the track waiting to cross, seem to be miles long, as indeed they are.  Double stacked container trains are limited to 4.2 kms, while general cargo is limited to a mere 3.7 kms.  However, despite the fact that there is a station in Banff there are no scheduled passenger services.  Instead passenger traffic is limited to what basically amount to luxury cruises.  The cheapest ticket I could find on the internet from Calgary to Vancouver via Banff was $1,200 plus tax, the top of the range ‘gold’ service was $5,800…. all exclusive of tax as is the Canadian custom.  An aside here, Canadians prefer everything to be priced with tax added at the checkout  so they can see how much the Government is taking off them.  As Barbara Flynn used to say in the Beiderbeck Trilogy “It’s a point of view”

Looking along the lines to Banff Station 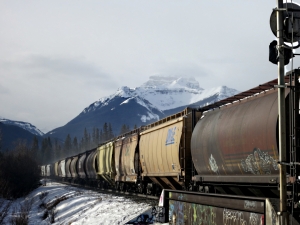 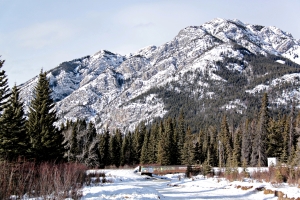 I have to admit that I love Banff in Winter because as well as offering relatively nearby skiing there is plenty of opportunity to explore the ‘trails’ even in winter.  I love walking by the frozen river or up Tunnel Mountain and more recently I followed a creek around to the frozen Vermillion Lakes just a brisk jog from the town centre, pleased to see a  Canadian Red Squirrel on the way. 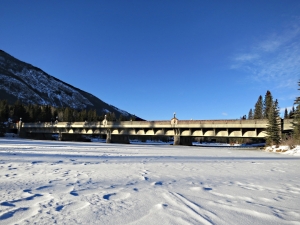 The bridge from the surface of the snow-covered river

Looking upriver to the Banff Bridge over the Bow

One thing which characterises the east side of the Rockies in Winter is that is cold.  Not as cold this time as last (2010-11) but temperatures are generally well below freezing for months.   This coupled with winter tourism imparts a character to the town like nowhere else I know.  Where else would you find a skating rink and ice-climbing wall in the main street or an ice-sculpting competition?  Brilliant.

Ice throne will be around for Pretenders until Spring 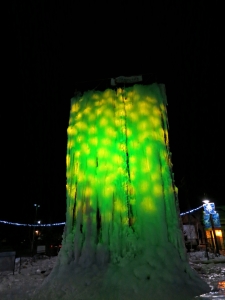 …. must be offputting when you’re hanging on by toes and ice-axe tips 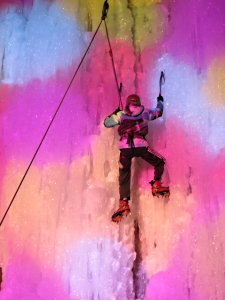 …. quite mind-blowing in fact

For those thinking of  a trip to Banff I recommend  Barpa Bill’s, the Greek food take-away2, The Banff Avenue Brew House for real ale/microbrewery aficionados3, and the Keg in the Caribou for top quality steaks4.

1 Response to Banff: a Canadian Rockies town in Winter