Late nights have been more frequent recently.  Four times in the last week I have been up until 03.00 and this has started to impact on the time I get up.  My boast that I get up at 07.30 whatever time I get to bed has begun to look a little lame.  The last couple of late nights have resulted in starts delayed to 08.00 and even 08.15.

It is now only a month until I go to the Canadian Rockies for a month of skiing and winter trekking.  Late starts there would be a waste of expensive daylight and a rare opportunity. So I need to re-adjust my sleeping pattern.

I’ve started the process by forcing myself to get up early in the hope that this will mean that I get tired and thence keen hit the hay at 01.00 rather than it dragging on. The early starts have coincided with a drop in temperatures and the first real frosts of the winter, overnight temperatures down to -3oC and temperatures at or below zero even in the day.

On Wednesday for the first time this winter the ground has been frozen, there has been ice on the on the Monmouthshire and Brecon Canal at the end of the garden …. and I’ve lit the log fire.  The fire is hypnotic and the temptation is to sit in front of it mesmerised by the flickering flames and soaking in the warmth.  But I have resisted the urge to hibernate.

Some days the skies have been clear, others grey and clagged in, but a combination of the frost, blue skies and remains of Autumn browns have meant I have taken the camera out whenever I go and have not been disappointed. So, some images of the cold.

Setting sun picks out a stone structure in the garden

Before the sun is over the ridge on the opposite side of the valley, dozens of vapour trails glow red 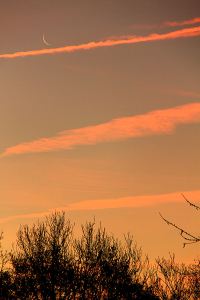 A thinsliver of moon among the vapour trails 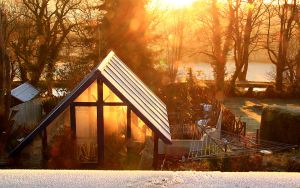 … with leaves carpeting the hillside under the trees 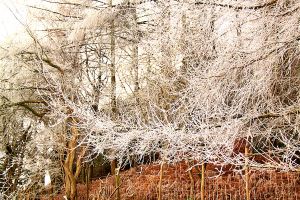