Bah Humbug!: Christmas and beyond

I regret that I don’t and never have, enjoyed Christmas.  Required jollity is not my thing.  Nor is the hyperventilating commercialisation which tries to drag behind it a vague connexion with the birth of Christ which the church does its best to focus on but is drowned out by the klaxon call to “spend, spend, spend!!!”

1st of December and the supermarkets turn on the Christmas musak.  This evening I met a friend for a pint and had to suffer battered eardrums from Christmas schlock (an English word of Yiddish origin meaning “something cheap, shoddy, or inferior [Wikipedia]) including “Never do a tango with an Eskimo”.  What!!!!!!!!!!!!!!!

As a stereotypical bloke I, inexcusably, always left preparations for Christmas to Enfys, my wife.  Now I get to do everything myself and appreciate how much of a burden it must have been for her.  My role was self-limited to getting presents for her and at least one good present for each of the kids, going up the mountain to cut holly and yew to decorate the house, and buying a Christmas tree.

I bought a Christmas tree today.  For the same money, £40 (€50 or $65), it was significantly shorter than in previous years, but I drew the line at spending more.  I have bought presents for about half the family and am considerably exercised about the need to buy for the others.  I also need to get to grips with sending about 100 cards.

This afternoon I took refuge in the past by looking back over the photos I took in the Canadian Rockies for the month around Christmas 2010-11.  I’m afraid that this year I’m looking beyond Christmas to going back to Canada for a month from mid-January. 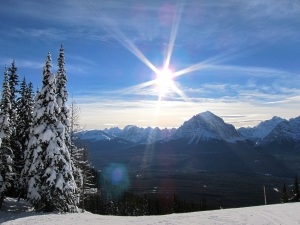 High on the piste at Lake Louise 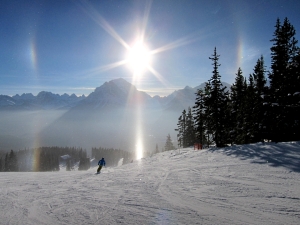 The sky above Lake Louise

On the way to Grotto Canyon near Canmore

Looking along the Bow River near Banff

Long shadows across the Bow River

Hot springs keep water open even in the depths of winter

2 Responses to Bah Humbug!: Christmas and beyond

Leave a Reply to The Mind of RD Revilo Cancel reply