Another very wet and muddy footpath again today.  This time I guess it was only to be expected as I went down to the coast and the Newport (Gwent) Wetlands Nature Reserve.  The mountain behind the house was clagged in with low cloud and heavy rain was forecast.  That plus the fact that I was advised by the physio to avoid rough terrain until my knee has properly healed up meant that  the coastal nature reserve with its ‘made’ paths was the best option for getting out and having some fresh air.

The reserve, on the site of former ash-pits at the Uskmouth Power Station, was initially created in 2000 as a requirement of the planning permission for the Cardiff Bay Barrage to compensate for considerable loss of wetland habitat by that construction.  Designated a National Nature Reserve in 2008 it is now managed jointly by The Royal Society for the Protection of Birds, the Countryside Council for Wales and Newport Borough Council.1,2

The site has a network of well formed and maintained paths3 but on Sunday I followed a path beyond the perimeter of the reserve to reach the Wales Coast Path further to the east for an extended walk along the massive sea defences which protect ‘The Levels’ as they are known from flooding at high tide.

I usually go down to the coast at low tide as there is more to see but on Sunday I chose to visit as it was approaching high tide.  Forecast to be at its peak of 10.63 metres (35 feet) at 17.00 it was well below its highest this year (12.86 metres on 16 October) and certainly below its maximum (on 10 September 2010 it reached 13.21 metres but gets even higher than that4.    With the second highest tidal range in the world the water in Severn Estuary rises higher than the land bordering it, hence the need for substantial flood defences.

But it also means that the speed of the incoming tide is very rapid, even with Sunday’s modest tidal range it came in at an average of an inch a minute.  However, the ‘Rule of Twelfths’5 means that in the middle two hours it comes in even more rapidly, 1½ inches a minute. Therefore not only does it carry a great deal of sediment and constantly looks grey and murky but great care has to be exercised when going down on the foreshore.

Having reached the coast path I then walked back towards the Nature Reserve, the tide coming in visibly as I walked so that it soon completely covered the mud flats and began to creep up over the grassland below high water, a line marked by tree trunks and other detritus carried along in the powerful current.

From the lighthouse at the centre of the coastal edge of the nature reserve I cut across the floating pontoon over the reed beds and ponds to the visitor centre for a very acceptable snack of Welsh Cakes and a caffeine fix while watching the massed starlings swirling in the dusk sky and the coots swimming across the pond outside the window, necks jerking rhythmically backwards and forwards in their characteristic manner of a comic strip dance based on an Egyptian frieze.

It was muddy, cold and it rained heavily towards the end but it was a fascinating and enjoyable couple of hours ambling.  A higher tide is forecast for 07.49 on Friday morning, I may go back again, hopefully to take advantage of better light to take more photos. 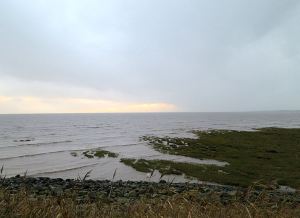 The incoming tide starts to cover the grassland on the foreshore 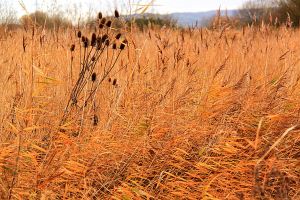 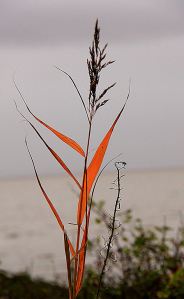 A constant reminder that the Nature Reserve is on the ash-pits of a coal-fired power station.

1 Response to November Daily Blog 25: Wet in the wetlands