Symi: straight to the top of the hot rock.

After a good warm-up walk on Sunday I decided not to pussyfoot around but to take advantage of the fitness I built up on Nisyros and go for one the most strenuous and challenging walks on Symi, to the top of the highest mountain on the island, Vigla, by the direct approach.  Straight up the front.  It’s strenuous because it rises to 617 metres from sea level in barely 2 kilometres, the rocky summit of this hot rock.  It’s challenging because there is no path.  At all!  The return route I decided on was to follow the ridge eastwards and drop off the end of it down to Pedi Bay and have a swim.  Again, no path.

Over 90% of the entire walk is ‘off-piste’ and over extremely rocky ground.  In places, especially getting towards the top of Vigla, the safest route is to climb the rock, the loose stony bits in between being too unstable for comfort.  Much of the rock close to the top is razor-edged, giving good grip but potentially blood-letting.

As it turned out the only blood that was let was when I straightened up too soon coming out of the 1 metre high door of one of the three small churches inside the courtyard of the Profitis Ilias Monastery en route.   For the first time I have seen, there was a key in the lock of the large outer door to the courtyard and visitors were clearly welcomed.  I went in to look around.  Thankfully when I banged my head, there were no monks in residence as they might well have been offended as I vented my view of myself for being unable to even walk through a door without injury.  How tall were these monks anyway?  The outer door was massive.

Slight digression.  In the UK the Cornish town of St Ives has a quality of light as well as an eye-pleasing informality of architecture which has attracted artists for decades The same is true of Collioure on the Mediterranean coast of the Languedoc-Roussilon region of France, another artists ‘colony’.

The same quality of light is found on Symi.  The intensity of colour really is amazing.  Knowing the place so well you just come to accept it, don’t regard it as anything special.  But it is.  I was reminded of this as I creaked open the large door into the inner courtyard of the monastery on the foot of Vigla.  The reflection from the high white walls was blinding. 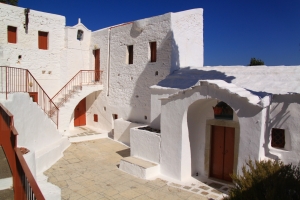 The sun was also dazzling as it reflected off the huge outcrops of jagged limestone as I climbed the mountain.  Very little evidence farming up here.  A few goats excavate the soil where they can to get at the roots of plants in their sun-scorched dormancy.   A few small circular stone structures, maybe put there to give them shade.  The temperature shoots up as the sun gets higher in the sky.

Looking down the way I came up and to the coast. The monastery I checked out is just to the right of centre, at the bottom of a long arette

Zooming in on Horio

A little wrinkle I learned in my 3 months on Symi n 2010 is that iced water is more refreshing than warm.  It does the same job in terms of avoiding dehydration, it’s just more refreshing.  So I put a one-third full bottle of water on its side in the freezer compartment of the fridge overnight and fill it with chilled water before I set out.  Carried in an insulated sleeve inside the rucksack it’s still iced at the end the hot afternoon.  I was glad of it on Vigla.

Despite the stop-off at the monastery which, for the first time I have seen, had a key in the lock and clearly welcomed guests, I made it to the top in exactly 1½ hours.

The next section of the route was considerably longer but lacked the steep ascent, just gradual undulating peaks.  The traverse of the ridge was made a little easier by following a goat path, obviously used by the entire herd of feral goats as a migration route from one end of the ridge to the other.  I think if I was a goat I would migrate. There was very little for them to eat, most plants being devoid of anything green and very many just dead, dry twigs.  The amount of dead vegetation seems to be accelerating year-on-year.  I think this is due to two factors; first, reduced rainfall in winter; second increased abstraction of water to keep tourists in showers and thereby lowering the water table. 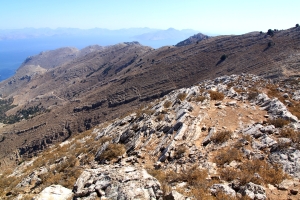 Looking along the ridge, the next part of the route 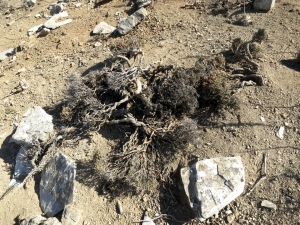 Dead and nearly dead vegetation everywhere. And this is stuff particularly adapted to survive drought!!

Yet in the middle of the desert, a tiny sign of new life.

I swam from the same rock at Pedi as I used regularly in 2010.  Slithering out of the water and lying on a hot rock on the Hot Rock to dry off is very pleasant indeed.  I love how the sun seeps into your bones and the rock warms you from underneath.