Thursday and unfortunately time to leave the Mani.  The staff of the family-run hotel, the ‘Areos Polis’ always very helpful and obliging, had arranged the full range of breakfast for me an hour early so that I could be on time for the 08.00 bus to Athens.

The long distance buses have a strange role in Greece.  They take a few people like me from The Deep South of the Peloponnese to Athens, from one world to another, and they also pick up and drop off locals at the wayside en route.  Sometimes there is a little ‘stasi’ (bus stop) sign at the side of the road but not always.  Sometimes in the towns there is a proper ‘stathmos’ (bus station) with ticket office, information centre and café;  sometimes it is counter in the corner of an ordinary commercial café; sometimes there is nothing.  You just have to get used to the fact that it varies and go with the flow.

The whole journey to Athens was a cross section of this wide variation.  In Geithio on the east coast of the Mani peninsula,  the first non-wayside stopping point, the bus simply pulls up in the street outside a café for 10 minutes or so.  By contrast in Sparti there is a big KTEL bus station.  At one point, I’m not sure where but about 75 kms from Athens, the bus stops for 15 minutes at a one of a series of 24 hour transport cafs close to an exit from the motorway.  Apparently, where the bus stops and where it goes has a long history of family connections and ‘who knows who’, spiced in latter years by EU safety requirements on driving hours I’m sure.  But somehow it works well.

Arrival at the outskirts of Athens was both perplexing and frustrating.  Rather than going directly to the ‘central’ bus station it meanders off and heads for Piraeus, passing some of the most squalid conditions I have seen in Greece, and then does a complete tour of the harbour dropping off people and parcels at the various gates each indicating whether it services the Dodecanese, Cyclades and so on.  It pulled up at one gate and waited.  Then a car pulled up on the opposite side of the busy dual carriageway road and a guy zigzags across through the traffic, collects a small box tied up with ribbon which the driver fishes out from the ‘hold’  underneath the bus, signs an A4 form in colour in triplicate, throws his copy into the nearby rubbish bin, and zizags back across the road.

Getting into the bus station took about an hour from the outskirts of the city.  The driver described it as the ‘central’ bus station though what it is central to I have no idea.  It is certainly not anywhere close to the centre of Athens nor does it seem to be central to the geographical limits of the urban area.  But then the word ‘geographical is from the Greek anyway so they should know..

You will have gathered that once we were out of the mountains the journey was pretty mundane, hence the rambling about other things.  The first hour of the nearly 6-hour journey was certainly interesting, passing through the Taygetos Mountains and then with views of them for a while as wide left them behind.  They are dramatic, well worth seeing and even more worth walking.  But they have the unfortunate effect of making everything else look a little ordinary and mundane afterwards.

The contrast between Athens and Areopoli could hardly have been greater.  I had a few hours in Athens in the afternoon before meeting Theo for coffee so I ambled along to Monastiraki less than 10 minutes from the hotel via Iroon Square (pronounced ‘earo–on), then around to the Acropolis, up onto the Areopagus and then to the Hill of the Muses.

The road between the hotel and Iroon Square delights in the name of ‘Odos Aristophonous’ (Aristophonese Street) which aficionados of the Beiderbeck Trilogy will know well …. except that the one in Yorkshire was in the process of being demolished whereas the Athens version is merely run-down, extremely run down.  Theo is concerned about me staying there.  When I told him that it was extremely good value for money he said that it was cheap because it’s really an ‘adventure holiday’.  I have to admit that walking around the area I was more alert this time than last because of my experience in Patras.  I dressed down when I went out in the evening (it’s difficult doing anything else with a limited wardrobe at the end of 2 months away), took barely enough cash and no cards, and carried my Kindle under my T-shirt.  Very defensive.

I headed for the Areopagus adjacent to the Acropolis partly because if affords good views of the Acropolis and partly to stand where St Paul stood 2000 years before to preach the sermon which was a symbolic turning point in world history  I’ve been there now 3 or 4 times and each time it is just as impressive.  Not far away, about 5 minutes walk, is the prison where, it is reputed, Socrates was imprisoned.

The Acropolis and its various structures have been surrounded by scaffolding and cranes for a long time and it seems unlikely that it will be free of such additions in the foreseeable future as I guess restoration work slows with budget cutbacks.  Some parts are standing out vividly now as the clean, white marble gleams in the sunlight.  But apparently this is completely alien to what it would have looked like when it was built as the whole would have painted in strong primary colours.

The views form the any of the 4 huge rocky outcrops at the centre of Athen, the Areopagus, the Acropolis, the Pnict or the Hill of the Muses is dramatic with the vast city spread out for miles in all directions, climbing up the surrounding hills and gleaming white in the sun.  I couldn’t help but reflect on the contrast with the views from the mountains of the Taygetos looking down over the few small villages and olive-green and golden brown of dried vegetation on the coastal plateau of the Mani.

On the Areopagus with the Acropolis behind

The Acropolis from the Hill of the Muses

Alien hordes on the Acropolis

Tower blocks spread out for miles in all directions

High rise on a hill, vaguely reminiscent of the feud towers of Vatheia but a world apaert 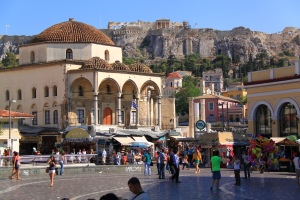 Looking across Monastiraki in the late afternoon sun

One dominant feature I noticed while wandering around the core historical area was the huge number of teenage Americans, most of them, though not all, doing their best to reinforce the stereotype. One lad apologised for being in the way of the photo I was composing when he realised that, while I was waiting for him to move, his place had been taken by 4 girls, his compatriot, who then spent 20 minutes posing for each other with the Acropolis as a backdrop.

Apparently the number of visitors to Athens, as to the rest of Greece, this summer is significantly down on last year with a particularly large drop in the number of Brits and other North Europeans.  Had it not been for a sharp increase in the numbers of Russians the situation would have been even worse.  The view has been expressed that they are welcome for the money which they bring, particularly as they don’t demand the same high standards as North Europeans, but there is a certain wariness and coolness in their reception. One group of visitors which now get a polite if somewhat cool reception is the Germans.  The only time I have heard a roar like the one which greeted Italy’s first goal over Germany in the semi-finals of the Euro Cup on Thursday evening was when Greece beat Russia on 16 June.  One headline in a newspaper a woman was reading in the bus asked “where are the Germans driving us” (it was a Greek newspaper, I hope you are impressed) and on another page was a not very flattering photo of Angela Merkel.  What a complicated, xenophobic world we live in.

This trip to Greece is very nearly over now.  I hope to take a final look back tomorrow and draw some thoughts together from these ramblings.