Areopoli to Gerolimenas: blood feuds and getting close to the edge of the known world.

Saturday and moving on yet again  I had been inspired to make this trip by reading the book ‘Mani’ by Patrick Leigh Fermor.  Amazingly I met an Italian couple in the restaurant which I singled out as the best place to eat in Areopoli who had read the same book and been similarly inspired.   PLF walked across the Taygetos from Sparti to Kardamili and then gradually made his way south which is kind of what I have been doing.

My aim has been to do the whole trip by public transport and to explore entirely on foot.  So I sussed out that the bus to Gerolimenas, a small fishing village with hotels to the south of Areopoli, and the last reliable place to find accommodation on a bus route, left at 11.30 ‘peripou’ – approximately.  If the Greeks say ‘approximately’, it really is!  If they say ‘definitely’ it means ‘approximately’.

Not wanting the ‘approximately’ to mean the bus left before 11.30 I checked out of the hotel and arrived at the bus station by 11.00 knowing that the ‘stathmos’ had not only a ticket office but a café at which frappes could be had.

It turned out that Saturday is market day in Areopoli and the car bus station doubles as car park and market.  It was great.  Just like a market day back home. Not!!  Local farmers came in with their crops of fresh local produce: oranges, melons, courgettes, aubergines, potatoes, beetroot, garlic, onions, honey and stuff I didn’t even recognise.  Pickup trucks were loaded down with great bundles of herbs such as oregano and sacks of ripe black olives.  I wandered around salivating and wondering if EasyJet hand baggage allowance would stretch to a sack of olives.

In the event the bus turned up about 11.50 and I was on my way with 3 locals who were laden down with plastic carrier bags full of fruit, veg and honey.

Gerolimenas is one of the most laid back places I have stayed in.  The hotel I had sussed out on the internet is at the corner of the harbour and the beach.  It is also a fish restaurant and does draught Amstell at €2.50.  The tables along the edge of the harbour are 4 paces from the door …. but I do have to walk down the stairs as well.  The room I was allocated had the ducting from the restaurant overhead and I complained about the constant noise so they moved me to a ‘triklino’, a 3 person room, on the corner with a balcony on two sides extending to about 10 metres.

The bay at Gerolimenas from my balcony

I settled in and then went for a walk.  If I complained about the aggressive vegetation around Areopoli, forget it!  The vegetation round Gerolimenas is totally impenetrable thorn-scrub which I wouldn’t tackle even encased head-to-toe in thornproof clothing.  And fields with rocks in?  More like scraps of soil between almost blanket cover of rocks.

I have mentioned tower houses before but it was clear from the bus that moving south from Areopoli was moving from an area which had good representation of tower house to an area dominated by high-rise.  They are defensive towers to which families retreated in times of feud to bombard each other’s towers with firearms including canons.  Men of the families were fair game but the women were allowed to come and go ferrying provisions and ordnance to keep the battles raging in some cases for decades.  Truce was declared at harvest time but once crops were all gathered in the feud resumed.

Now the villages around Gerolimenas are still dominated by tower houses, many, though not all, are being restored and new-build is in the tower-house vernacular though of broader dimension inline with modern space requirements..

I ambled up to one such village called Ochia and found it apparently completely deserted.  About 90% of houses were towers with a significant number still semi ruined and unoccupied. No shop.  No taverna.  No public provision except a children’s playground completely desolate and overgrown, doubtless paid for by EU funding.  Two very small churches next to each other with a connecting tunnel through the thick stone walls.  One thing about the tower house architecture is that they are totally enclosed.  The whole concept is to seal people inside.  Windows are very small and usually built up on the outside with stone walls with a gap at the top to fire a rifle.  Doorways in the older ones are often less than a metre high.  There is no provision whatever for any kind of social interaction.  As a town planner I learned long ago that the physical form of a place can strongly influence how people behave socially. 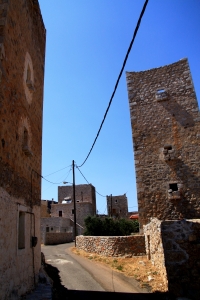 The main street in Ochia

Tower in the main street, preserved but unoccupied

Entrance to the village church

It is amazing that there is any sense of community or trust here at all.  Yet under the leadership of a couple of the clan chiefs including in particular Petrobey  Mavromihalis of Areopoli the Greeks fought for and won their independence from the Ottomans with the revolution of 1821.

At the edge of the village was what looked from a distance to be a cluster of small seaside chalets but was in fact the village cemetery.  The only signs of life I saw the whole time I was there were a couple of people tending the mausoleums.

This is historically bandit country and, as if to underline the fact, as I was going out for my evening meal about 21.30 there was the sound of automatic weapon fire from the hills above.  I’m heading up there on Sunday. Let’s hope they are all in church. 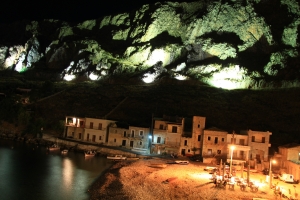 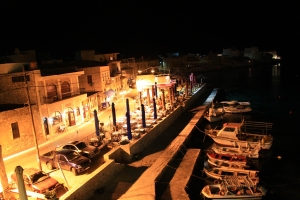 …. and of the harbourside

This entry was posted in Greece and tagged Areopoli, Greece, Mani, Taygetos Mountains. Bookmark the permalink.