Thursday’s exertions had taken a lot out of me so I opted for a gentle amble along footpaths heading to a beach and swimming.  Because I wasn’t focused on the need to get from A to B and back within a tight timeframe I could pay a bit more photographic attention to the landscape I was passing through.

The landscape of the coastal plateau is dominated by rock and stone.  The whole is divided up into fields which seem to be of three types: olive groves and rocks; hay and rocks; scrub and rocks, all divided up by stone walls.  In some ways it’s reminiscent of West Cornwall but with added sunshine.  And olive trees. 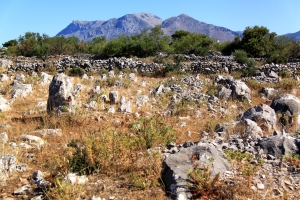 The fields are full of rocks 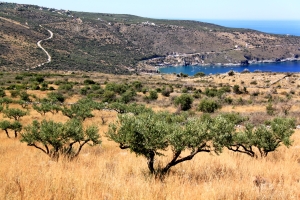 The paths are often contained between substantial stone walls and are stone paved, though that is getting lost in the vegetation.  I suppose that in a landscape which has so much stone lying about it is in the farmers’ interests to clear as much as possible off the fields and heap it up …. in stone walls.  It made a lot of sense when labour was plentiful and the objective was to maximise the growing potential of the bits between the big rocks. 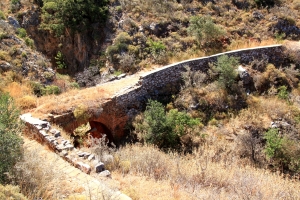 The other  dominant man-made structure in the Mani is the defensive tower and modern building reflects that vernacular.  It is often difficult to know if the towers are entirely new or renovations.

This Mani Tower was being used as a chicken coup

Getting closer to the beach I again disturbed a couple of eagles.  Fortunately, as I was now on a track rather than a scree slope at angle of rest, I was able to get a couple of passable photos.  They wouldn’t entertain impress an ornithological society but I was quite pleased to capture something for the record.

Then a couple of hours of the ‘swim-dry off-get hot–swim’ cycle.  I’m still a self-taught splasher when it comes to swimming but I don’t tire as easily now and enjoy it enormously.  I can only swim on my back and, given that the main temperature sensors in the body are in the back of the neck, getting into the sea after a hot walk is amazingly refreshing.  Cold water on the back of the neck when you are overheating sends shivers of pleasure through the whole body.  Wonderful!

But I can only take so much of the cycle and so come 14.30 and I was ready to move on.  The walk back to Areopoli is only an hour at a comfortable pace along a good track so I decided to continue on a footpath from where the track hit the road.  Another path was shown paralleling the coast at about 200 metres ASL before dropping down to some caves marked on the map.

Remember that footpath which traumatised me on Wednesday?  This was one almost as bad.  It started off OK, a bit overgrown with tall grasses, wild cereals and small prickly stuff, just as the path I had followed in the morning had been.  But after about 15 minutes it had become gradually so bad that I resorted to walking, or rather teetering’ along the top of the stone wall much to the surprise and then the terror of cows grazing in the field on the other side of the path.  They ran off like the herd of pigs in the Biblical story, though thankfully not off the edge of the cliff.  I teetered along the wall for about a mile.

Teetering along the top of the wall, here broad enough to get the camera out but soon to be blocked by trees 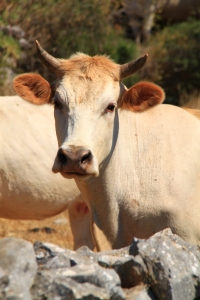 Bemusemnet before the terror took over

Then trees started overhanging the wall and I had to climb through them as they also completely blocked the so-called ‘path’.  One olive tree had obviously drawn its last sap and was lying straight across path and wall.  Then a stretch where the farmer had let his cows onto the path and they had flattened the vegetation quite nicely.  Only problem was that to keep them from wandering off the farmer had constructed barricades out of old pallets, dead branches, rocks, feta tins, iron bedsteads …. anything which came to hand really.  It reminded me of scenes in paintings of Revolutionary Paris, but without the corpses and the bare-breasted warrior maidens.

As you can guess I was not only very hot and very tired  but also starting to hallucinate by this time.  Anything to take my brain away from this nightmare.  Did I mention the spiders?  On both this and Wednesdays path they had stretched webs across the ‘path’ in their thousands.  I’m sure I wiped out the habitat of half the spiders in the Mani.  The webs were made out of high tensile steel and coated in a very effective adhesive which stuck to anything which touched it, particularly if it was hairy, like my head and arms and legs.  Extricating this stuff, usually carrying a mass of dead fly husks, was a constant chore.  My face was the worst because of the beard and …. enough is enough, you don’t want to know more.

I don’t think that any of the spiders were  anthropiverous (introducing  a new word to the world: from Greek ‘anthropos’ (man) and Latin ‘vorare ‘ (to devour)), but in size they were certainly getting that way.

Look what this one caught!

The ordeal goes on.  But I won’t.  Hiding myself inside my head from the reality of what I was going through I came to a conclusion: irritability is a luxury.  We get irritable when we are tired and things are not to our liking but there comes a point where the tiredness reaches a threshold and it becomes matter of survival.  You just do what has to be done to get out of the situation and don’t waste mental energy on useless emotion.

Another thing I also concluded was that either the map needs to be revised or the paths need to be cleared around Areopoli.

I survived to be grumpy another day.