Having enjoyed two weeks of summer in March we are now back to the typical wet,cold weather of Grey Britain.  It’s a pity because I had people to stay for the weekend and it took the edge off getting out and about.  But we did.  And it was something of an eye opener.

Friday morning and I was haring around doing food shopping for when they arrived in the afternoon.   I rarely use the car these days but having to source things from specialist shops (like venison sausages from Rawlings in Abergavenny – highly recommended http://www.rawlingsbutchers.co.uk/)  meant I couldn’t get around quickly enough on the bus.  I finishing just half an hour before they arrived. 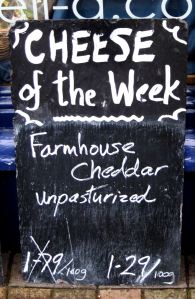 Along the canal, even the heron was fed up with the weather

The forecast was for dry if not sunny weather so in the afternoon we ambled along a section of the Monmouthsire and Brecon Canal and into Pontypool Park.  I walk through the park regularly to get to various places but normally at my customary rapid pace in order to get where I’m going quickly and to try to maintain a level of fitness.  Ambling at slow pace with the specific intention of looking at things was a bit of a novelty.

We have a mutual interest in trees, Chris being an aboriculturalist by profession, me just an enthusiastic amateur.  So attention focused on the fine tree specimens in Pontypool Park.  One tree I have passed countless times and noted how old and gnarly it looked but an expert eye saw it as something special, a very venerable sweet chestnut maybe 200-250 years old.  Ambling up a path I rarely go along we found there was a broad avenue of them on either side of a narrow valley.  We took photos and poked around for a good while despite the rain and the cold temperatures and when we got home looked them up on the internet.  They are on the Woodland Trust’s Tree Register. Seems they were planted as part of the redesigning of the Park by Capability Brown at the beginning of the 19th Century.  Fascinating.  I have lived here for 37 years but a fresh pair of eyes, linked to expert knowledge, looks beyond the wallpaper. http://www.ancient-tree-hunt.org.uk/recording/tree.htm?tree=ea42d059-235c-417c-bb36-a2b54817d0d8

One of the veteran sweet chestnut trees in Pontypool Park, this one hollow and standing on legs like a tripod 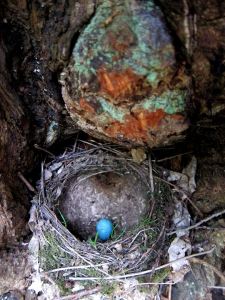 One had an abandoned nest in ahollow

Saturday was forecast dry but in the event wasn’t and again it was cold.  Nevertheless we stuck to the plan to visit Chepstow Castle and from there drove the few miles up the Wye Valley to mooch around Tintern Abbey.  Despite the grey sky and leaking clouds both places are very photogenic.  With my trip to the pinnacle-top monasteries of Meteora looming larger by the day it seemed somehow appropriate to be at Chepstow Castle, perched as it is on the very edge of cliffs dropping vertically into the River Wye. The scale of Tintern Abbey can only be appreciated by standing in the middle of it and the precisely formed and very well preserved arches seem to frame shots by the score.  Again, these are places more or less part of my backyard but rarely visited.  So the cameras were clicking away merrily the whole day.

Chepstow castle perched on the edge of a cliff above the river Wye, and the old bridge to England in the background

The castle loo, straight down into the river, flushed once every 12 hours by the outgoing tide 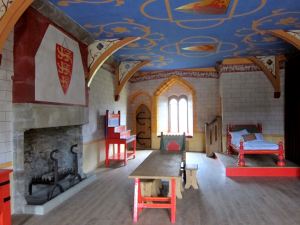 One hall restored to how it would have looked in Medieval times, very colourfull.

Multiple doorways on the way into Tintern Abbey 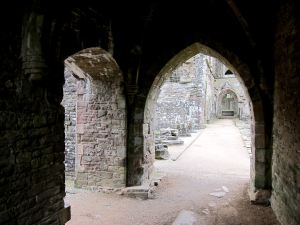 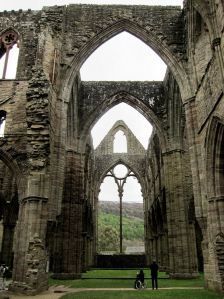 The apex of the roof is 98 feet above the ground. How did they do that!!!!

.... and looking the other way 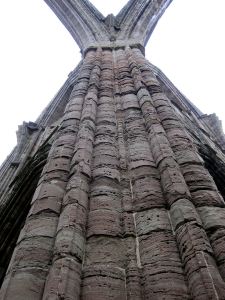 Looking up one of the main columns

Not so on Sunday when the rain was torrential.  We left the cameras at home and headed for the American Gardens, part of Pontypool Park but rarely visited and home to many North American species of tree planted in the mid 19th Century.  Not as venerable as the sweet chestnuts in the main park but still well impressive conifers including sequoia (giant redwood), auracaria (monkey puzzle) and yew ………… and a stone built cottage in the style of Hansel and Gretal.

Altogether I saw more new stuff in my home patch in a long weekend than I have for a long time.  Am I tempted to knock the Greek trip on the head and explore more locally?  Not a chance!!  Athens, Meteoro, Pindus, Mani …. bring it all on.  Temperature in Athens for the next 5 days are forecast to be over 30oC  with cloudless blue sky: temperatures in Metsovo at 1400 metres in the Pindus Mountains around the 20 mark.  No contest.