Having been mulling it over for some time I have now finally bitten the bullet and booked a flight to Greece and have an ambitious itinerary beginning to firm up for travelling on the mainland , visiting Crete, Santorini and the Cyclades before flying home at some point in July from wherever I end up.  But more of that closer to the time.  The important thing for now is that the deadline is set.  I fly to Athens on 9 May.

Winter having come to an end there seems to be the first signs of Spring with higher temperatures and the odd drop of welcome sunshine.  Together with the travel deadline this has galvanised me into action.  Sort of.   I suppose not unexpectedly, things haven’t quite worked out as planned.

In the wet weather last week I started the final stage of re-decorating the downstairs room, dealing with the exploding tiles on the wall in the shower room.  I thought it would just be a matter of taking off the loose and cracked tiles and replacing them.  Not so.  The problem, legacy of a cowboy builder, turned out to be much bigger than anticipated and is going to be very awkward and fiddly to rectify.

When the rain stopped, I did what any self respecting sloth would do, I went outside and shut the door on it.  Well, it seems a shame to waste good weather by doing work inside the house.  I had hoped to get the downstairs finished before I turned to the garden but the renovation timetable turned out to be overambitious.

I must admit that there is a big element of psychology at work here.  Grovelling around behind the loo trying to repair cement rendering isn’t the most appealing of jobs or the most conducive to job satisfaction. So any diversion, any excuse, is to be preferred.  After all, I have got to get myself fit for the mountains when I’m in Greece and I’ve got to sort the garden out before I go away for the summer.  It took very little for me to persuade myself to leave the grotty mess in the shower room.

There were a great few days at the end of last week and over the weekend so I went out walking a good bit.    On Thursday I walked up the ridge to the Goose and Cuckoo for dinner again and on Sunday I took a banana for a walk up Garn Wen, the local mountain, and then sat on the top in the sunshine and read my Kindle: very Last of the Summer Wine.

Low clouds touching the tops of the Skirrid, the Blorenge and the Sugar Loaf 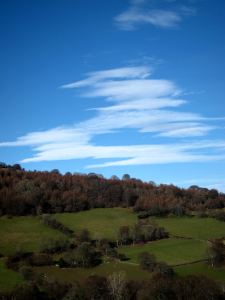 Impressionistic scribble in the sky

Banana on the top of a mountain

XIt’s a bit too early to be planting things in the veg garden yet so a great opportunity to do some of the creative gardening which I really enjoy: building stone walls and terraces and laying paths.  It’s a biggish garden and there is more than enough to keep me occupied until I pop my clogs but I do like to see something moving forward each year.  On Monday I was so enthused that I formulated an ambitious plan of what I was going to do in the day and …. failed to get anywhere near finishing it.  Admittedly play was interrupted by rain in the afternoon but progress was in any case a lot slower than expected.

Tuesday was the same story, ambition not realised.  Progress still slower than hoped.  I think it’s something to do with the fact that the mind, fired by the adrenalin of enthusiasm, foreshortens tasks, underestimates how long they will take: “lift those 4 stone slabs , pressure  wash them and get them ready to re-lay: easy, about 30 minutes”.  In the event it took nearly an hour and a half.  And then there are the unexpected setbacks.  I realised about 15.00 that I wasn’t going to finish on Tuesday either.  That was before the pressure washer packed up and I then spent another hour and a half trying, unsuccessfully, to find the source of the problem and fix it.  Having been galvanised into action it struck me as ironic that one definition of ‘galvanised’ is “to stimulate by application of an electric current” and here I was, ambition thwarted by lack of electric current.  There is at least another day’s work on that one small task.

One thing I was always very careful about in work was never committing to timescales which were unachievable.  Some tasks were very ambitious and with them I always drew a distinction between those which were content-driven and those which were deadline-driven.  You can’t have both.  If it comes to a crunch at the end of the process, either one or the other has to be sacrificed.  The advantage of my rolling 5-year plan for the garden is that if the deadlines aren’t met it doesn’t really matter, I would rather get it right than bodge it.  I guess the plans are ambitious but the timetable is sometimes over-ambitious.

So, what about my ambitious travel plan for the summer?  I know what I would like to do and where I would like to go but I’m not booking a flight back until I know where I’m going to be.  I’m certainly not trying to book any trains, buses or ferries or arrange any accommodation.

The job in the garden won’t get finished on Wednesday.  I have an ambitious schedule planned to celebrate the  Extra Day granted us once every 4 years by meeting up with a series of friends in Cardiff.  Mid-day snack, afternoon coffee and a pint in the evening are all arranged.  Shopping in between.  That’s always assuming that there are no unforeseen events.  A couple of weeks ago the bus I was on to Cardiff stopped on the hard shoulder of the M4 because the driver was taken ill.   On another occasion the driver took the wrong route into Cardiff and I didn’t get where I wanted to go.  Life is sometimes full of plans not coming together.  It’s good to be ambitious but always have contingency plans up your sleeve for when things don’t work out.

This entry was posted in extreme gardening, Greece, Spring. Bookmark the permalink.