Out of the Winter and out of the freezer

Winter came to an end around here 10 days ago.  During the previous week I had been wandering around the ridge-tops of South East Wales most days to take full advantage of the snow and ice.

As noted in my last blog post, on Thursday 9 Feb I went up to the highest point of the mountains within walking distance of the house to find the last remains of snow.  On the Sunday after that I walked along part of the local section of the Monmoutshire and Brecon Canal which flows, albeit very sluggishly, past the bottom of the garden.  I joined it at the top of what is called locally ‘The Jockey Pitch’, “pitch” in this context being the equivalent of the Lancashire “brew”, which, apart from being a pot of tea is also the term applied to a steep hill.  The “Jockey” in this case being the Horse and Jockey pub which is at the bottom of the eponymous pitch. The top of the Jockey Pitch, the point where the road crosses the canal and about 100 metres from the house, is also the southernmost tip of the Brecon Beacons National Park, a long finger stretching Southwards and bounded by the canal on the one side and top of the ridge on the other.  It was one of the attractions of moving here from Cardiff.  Mountain walks start literally on the doorstep.

So I walk along this bit of the canal frequently before striking steeply up-slope to reach the ridge top at Pontypool Folly.  Familiarity doesn’t breed contempt, it’s too attractive for that, but this bit of the canal now excites little photographic interest for me.  I photographed it frequently when we first moved here in 1975 because it was fresh and new but rarely get the camera out of my pocket on this bit of the walk nowadays.  However, it caught the attention again that Sunday.  The Waterways Board are carrying out repairs and maintenance to some of the bridges which cross it and to do so they have emptied some of the sections between bridges.  The bit as far south as the Jockey Bridge had now been emptied.  This normally leaves unappealing grey, muddy banks with detritus thrown in by passing morons.  But this was different.  Coming at the end of  Winter Week the canal had had an inch thick cover of ice, not thick enough to walk across, as has been the case in winters of long ago (it used to be a regular occurrence when we first  moved here), but still fairly sturdy.  Now, with the rapidly dropping water level, the ice had cracked in the middle leaving great slabs covering the muddy sides.

Looking upstream on the Monmouthshire-Brecon Canal from the Jockey Bridge, with water levels dropping and slabs of ice collapsed on the sides 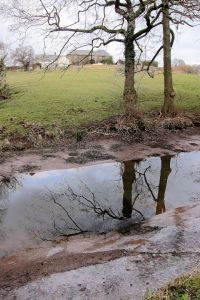 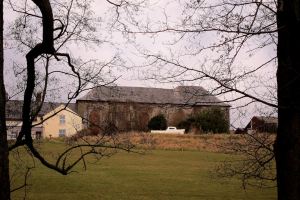 .... and in case you didn't spot it in the last photo, the boat left high and dry by dropping water levels of long ago.

Not very exciting.  Not terribly photogenic.  But with the return to greyness with the passing of winter it was a little bit of interest to cling onto to relieve the boredom.

During Winter Week I had been out walking virtually every day but the post-winter greyness is so unappealing that I have reverted to doing chores around the house some of which have been long-deferred.

One such was to sort out the freezers.  The situation has become chaotic.  There are two reasons for this.  When I go to Greece in the Summer I empty the small freezer in the kitchen, turn it off and put everything in the larger freezer in the garage.   When I come back I put more stuff in the inside freezer and lose track of what’s in the garage.

Slight digression here to talk about self sufficiency.  Before I went to Greece last Summer I   planted potatoes and winter veg.  There were bumper crops of everything, except that the mice got to the beetroot before I could.  The result has been that I have not bought potatoes and virtually no veg since last June.   I finally got to the bottom of the sack of potatoes two weeks ago, ate the last of the apples last week and am still eating sprouts and broccoli straight from the garden.  I was also putting potato, veg and fruit in the freezers before it went over.

Sorting out the freezers yesterday I found that there is a lot more in them than I thought.  Before I went away last year I kept an inventory of the contents of the inside freezer on the computer and I decided to resurrect it.  This time I’ve done it as an Excel spreadsheet listing the contents of each shelf in each freezer with totals adjusted automatically as I put things in or take them out.  That’s how boring the weather is.  As of today I have 52 portions of veg including 28 of a red cabbage recipe (with apples and plums among other things), 21 portions of mashed (blue) potato and enough fruit for 79 puddings including 32 portions of redcurrants and 24 of stewed apple.  This is all out of the garden and, certainly in the case of the fruit, more than I can eat before I go back to Greece.  But I’ll do my best. 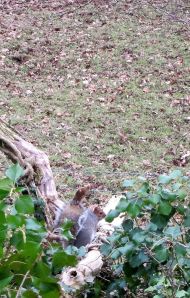 With no freezers to store food in, grey squirrels bury their nuts one at a time rather than in cache's. This one seemed to be viewing the field and scratching its head wondering where to start looking.