I had a good plan for Sunday but it didn’t work out at all.  Not one whit of it.  Did you know that an Amazon Kindle comes with the Oxford English Dictionary so you can check that hazy recollections of words like ‘whit’ are remembered correctly.  You may have already gathered that this ramble is really going to ….. well, ramble quite a bit.

Having been traumatized by the difficulty of getting a ticket for the ferry from Kalymnos to Symi I wanted to make sure I could get back to Rhodes for the flight home.  So I decided to book the ticket well in advance …. like, TODAY.

The travel office which sells ferry tickets is not unsurprisingly, down by the harbour so I planned a walk from there rather than from Horio, the old village up on the hill, where I’m staying.  I tend to prefer to stay in the old Horio on most islands, the Greeks of long ago knew that it’s cooler there and that the views are better.  As it turned out the travel office is closed on Sundays, something I don’t remember from past years so I don’t know if it is a long time practice not to be open on Sundays or a recent practice in view of the fact that the ferry company in question must be doing far more business than ever.  It seems that their rival for the run up the Dodecanese chain has gone into receivership which in all probability accounts for the remaining ferries being fully booked.

I would have to return to the harbour to get the ticket on Monday so it seemed appropriate to defer the planned walk until then as well.

Alternative options buzzed through my head as  I went back up the hill via another stone-stepped path, the Cataractis, rather than the more often used Kali Strata.  A real test of memory and sense of direction that was as it is a route I haven’t taken for years.  But I found the way through the labyrinth which is Upper Horio and by the time I reached the open mountain had finally settled in my mind on walking to a secluded beach on the other side of the island, usually referred to as Agios Vasilios after the tiny church set on the cliffs overlooking it but more properly called Lapathos Beach.

It struck me walking through the small settlement of Ksissos on the ridge that there are so many small, colourful churches around here. Passing places like this every day it is easy to not notice them, they become part of the background.  So I photographed a few.  And there are so many idiosyncratic images up in the mountains.  So I photographed a few of them as well. 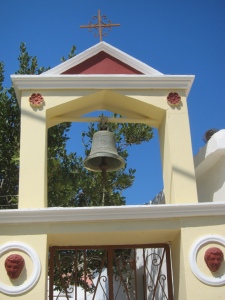 There are bells over many of the entrance gates

Even small churches can have ornate towers 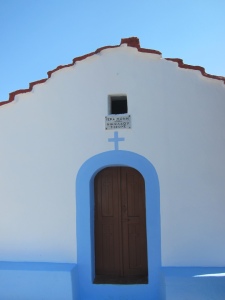 Sometimes the colour and attractiveness is in the simplicity

Must have been a heck of a wave, this is on the top of the ridge, about 300 metres above sea level

My heart sank as I made the near vertical final descent to the beach from the Agios Vasilios church as a power boat screamed into the bay. Not very secluded today then.  But more secluded than when the two round-the-island trip boats  pulled into the bay and hordes of trippers jumped into the water to swim to the beach and sit on the pebbles.  Until only a few years ago we used to walk here and share the length of the beach with one or at most two other couples who had also walked there.  No more!

Washed up on the beach. Half an hour later the spot where the rucksack and towel are in the foreground was submerged by massive waves

But trip boats don’t hang around here for long.  They have a date with a BBQ at the south end of the island.  Then it was just the parked-up power boat at one end of the beach and me at the other.  I had another swim and then stretched out in the sun to dry off until a large boat passing somewhere in the distance set up larger waves than normal on an otherwise flat-clam day and forcing me further up the beach to avoid getting my stuff wet.

I must admit I was dozing comfortably in the warm sunshine when I suddenly jerked wake as I heard a roaring behind me.  I looked around just as a huge wave washed all over me and my clothes spread out to dry in the sun.  Everything was drenched but I grabbed all my stuff and moved it even further up the beach as more waves roared in.

I have no evidence for this but it seemed to me that this wave activity was significantly more than is caused by passing boats.  The thought occurred to me that it may be a caused by under-sea seismic activity in the area, though admittedly fairly minor, not on an Indonesian scale.  Nisyros just a few miles to the north is classed as a potentially active volcano and there had been noticeable seismic activity there in May just before I arrived in June.

My stuff was absolutely wet through and I had to wring it out and spread it on the rocks higher up the beach to dry in the sun.  The camera rucksack had survived unscathed and pretty dry as it was standing upright just above me.  So I took the SLR out to wander along the beach to take photos while my stuff dried.

Then the second bizarre thing in a few minutes, the sensitive and high powered electronic zoom lens just stopped working.  Having unlocked it to use the zoom it wouldn’t close down to wide-angle again.  And then it locked up completely and wouldn’t take any electronic signal from the camera body.  It hadn’t suffered any physical trauma but I couldn’t help but wonder if it had maybe been damaged by an electromagnetic pulse if the waves did indeed indicate seismic activity.

Of course it could well be a coincidence.  The waves could be just a pretty big boat going fast.  It could be just a mechanical problem in the lens.  It is a natural tendency to want to make more of things than simple observation justifies, to offer explanations which over-dramatise simple events.  It somehow enhances the observer.  Who knows.  But I’m sticking to the hypothesis that a mini-tsunami hit Lapathos Beach until there is evidence to the contrary.  I was there!!

I still have the S95 but I do feel bereft without the SLR.  Last year when I came  for the Summer I brought my old SLR with its 2 lenses as a back-up but having had problem with Big Bag weight restrictions this year I decided it was an unnecessary belt-and-braces to have 3 cameras.

I walked back somewhat bemused by all this. Conscious that the weather was hotter than previously I paused to drink water at frequent intervals.  The walk down the kalderimi from the ridge back to Horio has amazing views down to the harbour.  I love the path but can’t walk it without remembering that the last time I walked it with Enfys she stopped along here just to soak it in, burn it into her mind, because she must have known that this was the last time that she would walk this way.

That view down to the harbour