I spent the morning of my first day on Symi just chilling out, catching up with things I need to do on the internet, and meeting people.  Having spent three months on Symi last year I got to know a lot of people and while not being a local it’s a very different feeling to just being here as someone who comes for a couple of weeks holiday.

It was strange going into the supermarket where I did most of my shopping last year, being greeted by the family that run it as if I was returning to the fold.  On Friday when I arrived, naturally I ate out in one of the restaurants but I’m in a large studio apartment in the hotel with good kitchen facilities.  So when I was in the supermarket buying water and looking for nutbars I made the snap decision that rather than eating out every evening as had been my intention I would cook for myself as I did last year.  It just seemed the natural thing to do – after all, I lived here for 3 months.

I spent the whole morning on the computer and chatting to people, very relaxing.  It’s nice to have a sense of belonging.

Then I went for a walk in the mountains and after a week of walking on Kalymnos I was fair zipping along, like a spring lamb, or more realistically, a bit more like an arthritic old goat.  The weather was absolutely perfect for walking, cloudless sky, warm sun with a breeze to make it really comfortable.  Two things struck me, first that I was very familiar with the paths and second that the distances between places seemed shorter than on Kalymnos.  I got where I was going more quickly.

I walked around to one of the prime viewpoints down to the harbour and sat there for my banana and nutbar.  It’s a great place with a lot of memories and I stayed there a good while drinking it in and playing around with the camera. 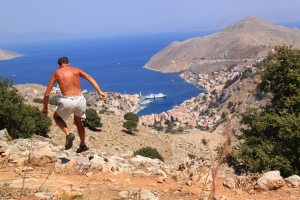 An old goat leaping around the mountains

... just in order to pose for the camera

Just in case you got distracted by the scrawny old goat .... what a great view!

Eventually I left and continued around the ridge and dropped down to the beach at Nimborio where I swam and lazed in the sun to dry off.  I guess it’s the sense of familiarity and belonging but I’m more relaxed here, not as driven to ‘go-and-do’ as I usually am.

Last year’s blog readers may remember the trauma of not being able to find green beans to make fasolakia, a shortage apparently caused by the lorry drivers’ strike on the mainland.  Now, I sourced green beans and fennel very quickly and the rest of the ingredients were straightforward.  I made a good panfull of it and now have 3 more portions in the fridge.  Speeds up the meal-making process enormously.

What will I do while I’m here?  I guess I’ll make it up as I go along.