Amazing walk on Wednesday.  The longest I’ve done on Amorgos and the most spectacular.

The first part was up an extremely well stone-paved kalderimi to one of the two mountain villages inland behind Eghiali, Laghada.  It takes about 30 minutes at a reasonable pace and is obviously still used as a ‘commuting’ route judging by the number of people I saw walking up and down it  with shopping and the like.

Laghada is a warren of alleys but I managed to find the right onward path, confirming it now and again by checking with locals that this was the right path to the monasteries of  Ioannis Theologos and Stavros.

Right from the start the path works its way inexorably upwards, through the village and onwards for over an hour with no relenting.  Eventually it reaches a kind of high-level plateau of farmed land.  The guide book refers to this area as the ‘hidden Amorgos’ because there are no views into it other than walking through it.  There is clear evidence that here donkeys are widely used for transport.  There is no other way and unlikely to ever be so.

Fresh evidence that these paths are kept open by donkeys

Some sections of the path are being restored and stone-paved once again, obviously with public funds from some source or other.  Not surprising really since, according to the guide book,  there are ceremonies every September at the monastery to which I’m heading first, that of Agios Ioannis Theologos, St John the Theologian.  The path must be used by the religious dignitaries in their robes and though very good walking in normal clothes must be a right pain in all your long-flowing finery.

In the middle of nowhere, obligatory notification of public funding. of the restoration work

The monastery itself stands out in the landscape, brilliant white and spectacular in a very rugged, early-Byzantine kind of way.  It’s a shame that it isn’t open as the inside is supposed to be very interesting. 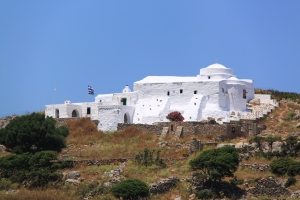 Monastery of St John the Theologian: built in the early Byzantine period, almost like a fotress

Peace and calm inside the enclosure

A major problem I’m having with today’s blog is that there are just so many photos and images of places like Ioannis Theologos that they can’t all be included.  Best thing is to come over and look for yourself.

By now it’s the middle of the day and there is little breeze.  I don’t know whether this end of the island is more sheltered from the prevailing wind which in Chora was consistently varying between strong and howling, or whether the wind has subsided generally.  In either case it was now very hot and I was having to conserve water.

The onward path to the next monastery is again inexorably upwards but not steeply so.  There is a rocky section where I’m bounding along like a gazelle.  Well we all have to have our dreams.

Then round a bend and there comes the brilliant bit.  The path narrows dramatically and hugs the cliff face and crosses screes for as far ahead as can be seen.  Absolutely fabulous.  It’s not a path to think about the consequences of slipping or tripping, just for making sure that you don’t.

On the right are sheer cliff faces rising upwards. To the left are screes dropping 2000 feet straight into the sea.  Fantastic walking.

One short section of this psycho path 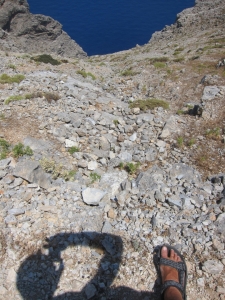 Psycho photographer on the edge: yes, that scree does go straight down 2000 feet to the sea.

Eventually, round a craggy outcrop and there is the goal.  The old monastery complex of Stavros, The Cross, sitting in a col at about 2000 feet above sea level.  Not as spectacular as the other one but somehow more impressive for the sheer isolation of it.

The walk back is just as spectacular but the other way round.  Cliffs on the left, scree on the right.  It’s so exhilarating I keep having to calm myself down in order to stay safe.  I seem to stop every few feet to take yet another photo.  Again they can’t all be included.

The return seems to go more quickly.  In a way  suppose that’s because it was downhill but it’s also because the mind is still exhilarated.

Reaching the mountain village I find a different way through it to the top of the kalderimi down to the harbour.

Still a feature in the mountain villages

It’s a while since I stopped so I sit in the shade of an olive tree and have a celebratory banana and finish my water.  Blog readers may remember the beastie which took a  fancy to my rucksack a few days ago.  Chris identified it for me as a cicada, thereby destroying my obviously erroneous belief that a cicada was a 3-4 inch long green grasshopper thing.

The cicadas were really giving it what-for in the olive tree, quite deafening.  But one of them seemed to be chirruping from the stone wall on the opposite side of the path.  It was.  I tracked it down.

I got back to hotel just after 15.30.  Hot, tired, sweaty, grubby, so I took myself off to the beach for a swim.  Another great end to a great day.