Amorgos: round and about

Woken up early this morning by the on-board tannoy of a Big Boat.  Thought I was dreaming about going back to Kos on Sunday morning.  But no, it was  a Blue Star ferry calling in on its way to Astypalea.  Took a photo and went back to sleep. 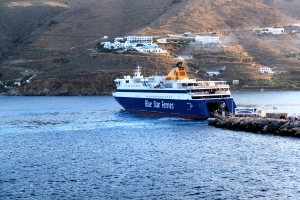 The early morning boat comes with the view

An easy day walking planned for Thursday to save energy for a long walk planned for Friday, the last full day’s activity on Amorgos.  Included in the walk guide is a circular route from Eghiali to the two mountain villages inland, a walk which has also been recommended by friends.  Looked good.  Was good.

Didn’t set out until after 11.00 but no pressure on time.  The path up to Lagadha I had done as the first part of Wednesday’s walk, an amazingly well kept kalderimi without urbanising it.  Sometimes attempts to ‘improve’ mountain paths end up making them more urban than rural in character.  That is certainly true of one path on Tilos which is furnished with park benches and the like even in a col in the mountains.  Fair dos though, the fact that island councils are willing to do something, anything, to maintain or improve paths is to be applauded because unfortunately some islands do nothing whatever to protect never mind improve paths.

But back to the path from Eghiali to Lagadha.  I reached the village somewhat warm and perspiring a little more than mildly but that was only to be expected because of the time of day and the fact that I did walk a bit fast.  As the path enters the village it soon reaches a car park which is at the end of the road from the town and which also marks the turn-off to go up to a small monastery/church built into the cliffs and marked on the map as Agia Triada.  When I say small I mean really miniscule.  It makes the church built under the rocky overhang which I visited last week seem agoraphobic.   (get the subtle use of Greek-origin word(s) there!)

Another bad case of Repetitive Photo Syndrome.  But this was a particularly bad case as will become clear.  It’s a fascinating place.  Indescribably small.  The steps at the top are so steep and narrow that you nearly fall backwards going up them and then at the top you have to crouch down to walk up to the church itself.  The door is about 3 feet high and the inside is only marginally higher and it seems scarcely 6 foot to the back wall.  It was not only unlocked but open.

Going up I completely missed the steps going up again to the next level which involves a tight right turn while almost lying on your side.  It reminded me of some cave passages I have been in.  The steps go up to another level with another church, this one closer to normal height but no bigger in floor area.  And then up again to a kind of gallery set under the cliff with the remains of what I think is a tiny monks ‘cell’ (the cell is tiny, I have no idea of the size of the monk) at the end.

Unfortunately it was mostly in the shade being set in a North West facing cliff but I took loads of photos, continually trying for a better angle or composition.  The problem was that it was all so narrow that even with the wide-angle end of the zoom lens it was impossible to get far enough away to do it justice.  But I took photos of lots of bits of it 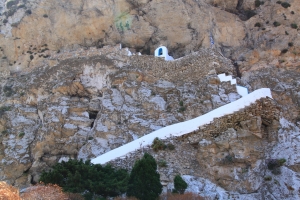 View from the path of Agia Triada built into the cliffs 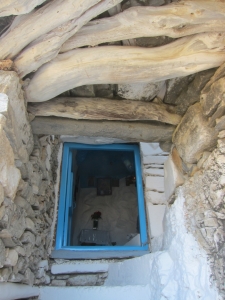 Approaching the door of the lower of the two churches 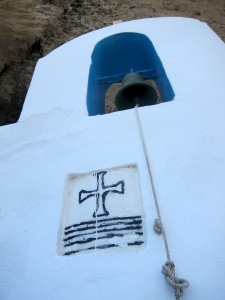 The top of the upper church

Eventually I dragged myself away but not before resolving to try to go back in the evening when there would be better light.

Continuing back through the village I found the next section of the path, down into a ravine and then up the other side to a tiny settlement called Stroumbos.  I had seen it yesterday on the return from Stavros and, knowing what I had in mind for today wondered if the path went that way.  Yet another fascinating place.  Until recently nothing but ruins, a number of houses have been restored and others are in the process ….. even though there is no electricity or piped water.  That is impressive commitment! 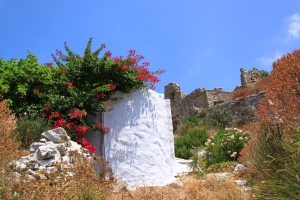 Coming into Stroumbos, a mixture of the restored and the still derelict

Having climbed out of the ravine and passed through Stroubos the path continues upwards and as it passes on the inland side of a small hill (about  250 metres) it is lined with flowering plants.  Presumably having less sun the flowering season is slightly later than in the full sun on a South facing slope. It strikes as a marked contrast with the Dodecanese islands which we have always visited at this time of year when there is little left but crisped and dried foliage.  Furthermore, comparing the weather forecasts for Kos and Santorini  (Amorgos sits in between) over the last couple of weeks it has been clear that the temperatures in Kos are at least 10oC higher, at times a lot more. 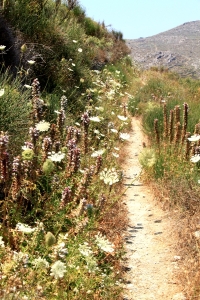 Soon the path becomes a well paved kalderimi as it keeps more or less the same height and leads into the other mountain village, Tholaria.  Time for a frappé before dropping down once again to Eghilai and a very welcome swim. 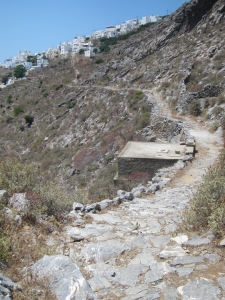 The walk was not as dramatic as yesterday’s but certainly shorter and less taxing which was the plan.  Unfortunately my intention to return to Agia Triada got in the way of a less taxing day.  Brisk walk back up to Lagadha to catch the setting sun on the cliff.  Another visit to all the photos I took earlier in the day.  Then a brisk walk back down to have a meal. 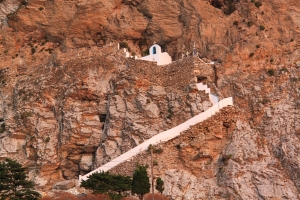 In the sunset the cliff becomes a golden brown 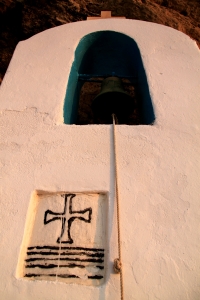 ... and the buildings themselves become mellow 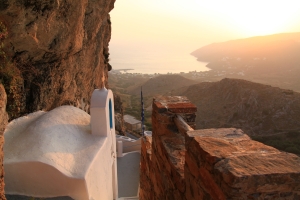 In fact a golden glow infuses everything

On the basis of the evidence from my pedometer, which is only a crude measure of distance because stride length is so variable on such variable terrain, I covered 21 km today compared with 24 yesterday.  Ho hum.  Let’s see how the legs stand up to tomorrow.