After a much longer and tougher walk than usual on Monday, I decided discretion was the better part of valour on Tuesday morning.  I got everything ready to post the blog and getting a quick connection I posted it all very expeditiously, including a couple of photos, and managed to access e-mails as well ….. just before the connection went down again so I couldn’t reply.  The connection really is rubbish.

That sorted, I made sure I was down to the harbour well before the day trip boats came in and sorted a lift on one of the volcano buses to the turn-off to Emborios, the other caldera-rim village.

Very interesting on the bus.  There was a small group of Germans staying on the island who were there ahead of the boats and then a few others from the boats coming in small groups, including a French contingent of 8.  Then just before the bus pulled out a group of 17 got on.  Turned out they were from the Czech Republic and with a young girl as tour guide.  One of the other bus drivers who spoke good English got on and announced that there would be a commentary on the journey in Czech and would the other nationalities please be respectful and not make a noise so the Czechs could hear what was being said.

It soon became apparent that the commentary in Czech was going to be non-stop. This irritated the French who started to talk among themselves increasingly loudly.  When the tour guide half turned to see what was occurring one of the French blokes shouted out “Now please can we have all this in English”.  The Czech girl patiently explained that it was the Czech group which had paid for her services not any of the other nationalities and so, no, the commentary would continue in Czech.  I have to say it did sound pretty boring but she did have a completely valid point.

A couple of things strike me about this.  First, the French bloke asked in English for the commentary to be in English.  Pretty well unheard of from the French who are fiercely defensive of their right to speak French and have everything translated into French.  Second it as a peep hole into the impact of the New Europe.  One of the younger members of New Europe having the whip hand over one of the oldest members.  To quote Corporal Jones in Dads’ Army  “They don’t like up ‘em”.

I got off at the road junction.  The Czech girl had to interrupt her commentary, get out of her seat at the front and climb down onto the road so I could leave the bus but she said cheerio very nicely.

The road up to Emborio is only short and there is always the pleasure of the sauna to look forward to.  It’s a small natural cave heated by a vent from the volcano.  Stick your head inside and your specs mist up instantly and even after a few seconds it feels cool outside again.  One of these days I’ll check the temperature inside.

Emborio is like another world, another time.  The houses are very old, many of them teetering on the very rim of the caldera, certainly some of them with natural under-floor heating.  Though a lot are derelict, an increasing number are being renovated.  It’s always worth starting a walk from Emborio with a sit on the balcony of the eponymous taverna, cantileverd over the end of the caldera.  Today the homage was further rewarded by an eagle fly-past.  Enfys would have loved that.  Just managed to flash off a long shot with the big camera. 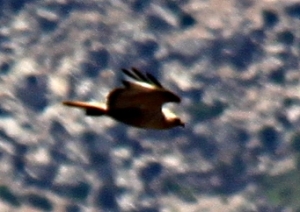 Once outside again it’s up through the arches to the top of the village and the few remains of an old castle and a photogenic church, one of the places where I always get an attack of Repetitive Photo Syndrome.   Normally there is a shadow across the black, white and, on Nisyros, red pebble ‘hochlachos’ pattern on the floor of courtyard but today, with the sun at just about its highest, the whole of it was lit up.

Main square in Emborio: church on the left, taverna on the right

On the way up through the village

The great thing about the walk from Emborio is that once having climbed from the bus terminus/car park at the bottom end of the village up to the castle, it’s downhill with stunning views all the way to Mandraki.

The sun is pretty hot around the middle of the day at the moment.  Last year I came over early May so had acclimatised to the heat by June.  This year it’s straight into the heat so I stopped off at the monastery of Evangelistra on the way back to doze in the shade in the courtyard for half an hour.  I must be getting soft in my old age.  Not that I’m that old!  I reckon I’m at the door of middle-age, though unfortunately it’s the back door.

Study in white – Evangelistra from the back

I heard a nerd on the radio in the car on the way up to Ruth and Tim’s, seems like eons ago now but it was only last week.  Said nerd was trying to hype up some happening he was promoting and said “Yes, we’ve held this event every year for the last two”.  Well, having dropped down from Evangelistra I went straight to the black-pebble beach of Hochlaki, something I’ve done every day now for the last three!  The swimming seems to get better each time.

Still no solution to the phone problem.  Still poor internet connection.  But these places I’m going were there and lived in many years before the concept of easy international communication was even dreamed of.  Sobering.

This entry was posted in Greece 2011 and tagged Emborios, flora and fauna, footpaths, Greece, Hochlaki, Volcano. Bookmark the permalink.