It’s good when a plan comes together: poetry and wild gardens

A couple of things are starting to come together.

I have finally sorted everything out for publishing the book of Enfys’s poems.  Completed the artwork and taken it to the printers.  I collected the proofs on Friday and gave the go-ahead for the printing Monday morning.   Hopefully it will be printed by Tuesday 24 May, possibly a little sooner.

All profits from the sale of the book will go to St Anne’s hospice where Enfys’s spent her last days.   As it says in the introduction:

“I and the family publish these poems in the hope and with prayer that through them Enfys will continue to be a blessing and help to others”.

It has taken me long enough to finish it but now it is done.  A milestone reached. 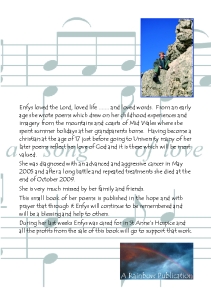 And the wild garden?  A number of years ago we started to prepare for old age and decrepitude by planting Acers at the bottom of the garden to replace the ‘bottom lawn’, the intention being to replace an area which required regular mowing with an ‘Acer Glade’ requiring zero attention.  We let the chickens roam in the area, fencing it off from the vegetable garden. They loved it and the eggs were fantastic with rich orange yolks.

Before I went to Greece last summer I re-homed the hens which, between the 8 of them, had reduced the bottom lawn to bare earth / mud depending on the amount of rainfall.  They were even starting to dig out around the roots of the Acers.

Re-homing the chickens had two very direct consequences.  First, emerging seedlings were nolonger grubbed up and eaten.  Second, the young seedlings had a richly manured soil to get their roots into.

By the time I returned home in October there was an almost impenetrable jungle of weeds with thistles 8 foot high.  Daunting to say the least.

Since getting back from Canada in mid January I have been trying to ‘weed-out’ what I regard as undesirable plants, mainly thistles, nettles, ‘flicky weeds’ ( hairy bittercress or Cardamine hirsute  to aficionados), and dandelions, making sure I grub them out before they seed.  By contrast I have been shaking out seed heads from Aquilegia and relocating foxgloves from the vegetable garden.

It is an ongoing battle but there are signs of success with a dense growth of Aquilegia in particular.  The Acer Glade is beginning to look good!!!

Preparing for decrepitude: the ex-lawn

This entry was posted in extreme gardening, Reflections, Spring. Bookmark the permalink.