I’m back home again now, my house-sitting duties having come to an end.

The garden usually springs into life during April, growth accelerating towards the end of the month and into May.  This year the change in the 10 days that I was up North has been particularly dramatic with perennial flowers, in tight bud when I left , fully open when I returned and significantly more numerous and luxuriant than usual. I reckon that this is partly a survival mechanism of plants after a particularly testing winter and partly a response to the unusually long period of warm, dry, sunny weather.   The display of colour has been quite spectacular and, as a bonus, clearing away the weeds and debris revealed odd bits of artistic expression.

One such was a piece I created a few years ago in the Crap Art genre, the natural progression of Brit Art.  If the well known patron of the genre, Michael Scratchy, is a reader of this blog, the work is for sale for £1.25 million plus dealers fees which as usual amount to a further £1.25 million.  Small beer for him I know but then I’m just an enthusiastic amateur without years of training in art school so I can’t expect my work to sell for high prices.

Cornflowers: colourful, attractive ..... but can be invasive

Azalea with the gargantuan agaves in the Blue House behind

Aquilegia self-seed everywhere but are preferrable to most weeds

Bluebells have an all-too-short flowering lifespan

'Bicycle Fork', the work of art which might, or might not, take the art world by storm. 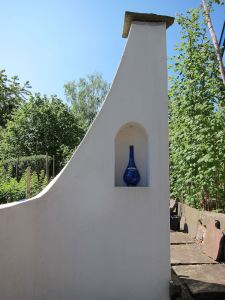 My tribute to Greek design - it waits to be finished.

XXNow that I am back home there are a great many things to do, a lot of decisions and choices to make.  Which is why the blog has taken a back seat for a few days.

When I was working I used to make a distinction between tasks which were ‘deadline driven’, completion required by an inflexible date such as the start of a public inquiry, and those which were ‘quality driven’, standard and content required by inflexible specification.  Project directors, particularly those with no real grasp of the job, usually require perfection delivered on time,  fail to grasp this fundamental distinction, fail to grasp that in some cases it is either one or the other but cannot be both.

Life-after-retirement is not often like that.  Few everyday tasks are truly deadline-driven.  But some are, some deadlines are inflexible.  So it is for me now.  I’m facing a deadline-driven task – getting the house and garden ready to leave when I go back to Greece on 4 June.  That is a ‘hard’ deadline, non-negotionable,  the flight is booked.  Therefore, because there is far more to cram into the remaining time than can possibly be achieved, the decision is already made that some things just won’t get done and the quality of some of the things which do get done won’t be up to standard.

That’s what poses the dilemmas.  Setting the priorities.

The main problem is the garden because that is dynamic, in constant change, growing.  I may not get the house cleaned and tidy as I would like but if necessary that can wait until I get back.  The garden by contrast got out of control last summer and could get really bad if let go again.

The strategy is to plant up the vegetable patch with winter veg using weed-suppressant fabric to control the weeds and to get the fruit garden under control.  Simple.  Simple???

It’s not just a matter of having a ‘Four-Week Plan’ to get things sorted.  The weather is an unpredictable variable.  On Friday for example rain was forecast for early evening so I worked until it was dark on digging out leaf mould from the leaf bin and lugging it up the garden to earth up the potatoes.  I finishing 10 minutes before the rain came.  On Saturday every time I stuck my head out of the door it rained  so consequently very little was achieved.

Which meant that I devoted the day to another priority, getting the book of Enfys’s poems ready for publication before I leave for Greece.  It’s now just about ready to take to the printers so I’m hopefully on target with that one.

But this all suits me down to the ground.  It’s how my brain works.  I can only get myself into gear when there are deadlines.  It was one of the things I enjoyed about work, constantly adjusting workloads and priorities as the work programme was disrupted by changed circumstances, new tasks and reduced resources.  This isn’t on the same scale but suits my deadline-brain much better than drifting.

This entry was posted in Art, extreme gardening, Reflections, Spring. Bookmark the permalink.