It often irritates me when people talk about a ‘white-out’ whenever it snows. It’s part of the unfortunately growing habit of exaggerating everything for effect.  Some people never have a headache, only a migraine.  If you’ve had migraine you know the difference. Winter weather is becoming increasingly subject to such exaggeration.  Even the Met Office talks of ‘Severe Weather Warnings’ if 1-2 cms of snow is forecast.

A ‘white-out’ to those who have spent any amount of time in the mountains in winter conditions is when you can’t tell where the ground is.  The wind whips up the fallen snow and it becomes impossible to distinguish between that and the falling snow. The light is diffused and you don’t know whether your next step will be up, down or level.  Visibility is virtually nil.  It can be very dangerous particularly if you’re on a narrow ridge or close to the top of a cliff face or a cornice.

I have been in white-out conditions a number of times.  On Monday morning, back to skiing after the weekend off, and I found myself in close to but not quite white-out conditions on my warm-up run.  It was bright and sunny at the top of the run, the easiest Green run designated for beginners and those learning.  The view was fabulous. So was the skiing.

At the top of 'Wiwaxy', the training and warm-up run.

But towards the end of the piste, where the run drops steeply and is funnelled between a fenced drop-off to the left and another fenced run merging from the right the snow-blower was working overtime producing a dense cloud of snow blowing across the piste presumably to try to cover the icy sheet which usually forms there.  It was not a white-out but you couldn’t see the bottom from the ‘roll-over’ at the top and the visibility was so poor it was impossible to see the shape of the ground or distinguish the icy patches from the reasonable snow.  As is usual, people were in trouble across the narrowing piste and it was difficult to see and avoid them.  For whatever reason, lack of competence I guess, I became one of them.  I wiped-out.  No real problem, I didn’t come out of my skis, got back up fairly easily and carried on down to Easy Street and a run down to the Lodge to meet up with Ruth and Tim.

But my confidence had taken a hit.  We decided to go up above the poor visibility to the clear, bright sunshine at the Top of the World.  That is genuinely what it is called.  Even though there are two higher peaks.  It was very windy and very cold but it was beautiful.

The Green run from the top had been redesignated a Black because the conditions were so poor so we came down a Blue.  That was not fun.  The top section was very narrow, steep and very icy.  Apparently most people do a beginners snow-plough down it which makes it more icy and forms a ‘V’ shaped channel which is fine if you have the skill and competence to straight-line it but for nervous intermediates like me who want to control the speed it isn’t easy.

I survive it without any mishap and did more-or-less parallel turns all the way but without any real skill or style and it knocked my flagging confidence even more.  We stopped at the bottom of the steep bit of the blue and once again the views were amazing.  It was a joy and a privilege to be there.  And I could still feel my fingers enough to take photos.

Just below The Top of the World 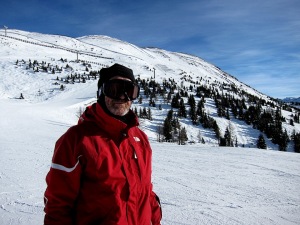 .... and, apprehensive and grim-faced, I was there too

I coped well enough on the rest of the way down but I felt my skiing had gone backwards and my confidence was not overly improved.  We decide to finish skiing back to the Lodge on ’Juniper’, a Blue run which tended to get a lot of traffic and so was frequently icy and difficult.  But it was great!  Better condition than it had been anytime in the last 3 weeks. It gave my flagging confidence a boost.

We had lunch and then split up.  Ruth and Tim went to do runs more suited to their higher level of ability than the ones I do.  Ruth has her Level 2 Instructor assessment coming up soon and needs to concentrate on preparing for that.  Stopping only to take a photo from the terrace outside the Ski Lodge, I went back up the chair lift to do another run on ‘Juniper’ as it was so good, determined to concentrate on improving my technique and moving on to better things.

Trees blasted by the snow-cannon and, ironically, the Ski patrol and First Aid Post

After a sluggish start, getting going again after a lunch-stop is always a bit of a hurdle whatever the sport, I got quickly into my stride and came down the steep, difficult part of the run satisfyingly well.  I did short, smooth ‘S’ turns across the shallower slope swinging comfortably from side to side onto the last steep drop onto the top of Easy Street.  And blew it completely half way down.

I somersaulted over the tail of my right ski and yelped with pain as my knee twisted.  I came out of my skis in accordance with the  settings they were calibrated to, and managed to stop sliding only a few yards further downhill.  I collected the skis and hobbled out of the way of the oncoming traffic, a lot of good skiers and boarders come over the roll-over here very fast and I was grovelling in the middle of the piste, and got back into my skis.  My right knee was right sore but I managed to ski back down to the Lodge.

I went inside to warm up and feel sorry for myself and then decided though my knee was painful I would give it a shot and see if I could still ski on it.  My confidence had been so low I didn’t want to finish the day at 14.15 with no confidence at all.  So I went back up the chair lift and did another run on ‘Juniper’.  In some pain and not very stylishly but without incident.  So I went back up again and did a run on the Green run I had wiped-out on first thing in the morning determined to ski with better technique.  Not a bad run.  Still only 15.00 with a planned 15.30 finish so I went back up again.  I wanted to build my confidence so I could start Tuesday on a positive note.  Had a very good run.  Not stylish in the greater scheme of things but quite good for me.  I was in pain but I felt good.

But that was it. The end. As long as I kept it moving the knee was painful but manageable.  As soon as I stopped it became clear that I had a problem. A big problem.  I could hardly walk when I got off the bus outside the hotel.  Long story short.  I hardly slept that night.  I went to a physio in Banff on Tuesday morning and she confirmed I had a Grade 2 strain of the Medial Collateral Ligament.  Certainly no more skiing this week and probably no more before I go home next Wednesday.  I could barely walk let alone ski!!!

This entry was posted in Canada, Grumpy Old Men, Winter. Bookmark the permalink.