Nisyros:  castles in the air

I first went there in 2001 on a day trip from Tilos.  We only had a few hours on the island but in that time we were hooked.  First we went by coach into the caldera, the 3-kilometre long ‘hole’ in the middle of the near-circular island, and were overawed by the main crater, hissing and steaming, belching sulphur gas which crystallised in small but intricate formations.  Then, taken back to the harbour and let loose on the town to spend our money in the shops and tavernas, we chose instead to go for a walk and somehow found our way up to the Paleocastro (paleo = ancient) on a hill overlooking the town.

We were blown away by the scale of it, not only its extent but the huge size of the stone blocks from which it is built. Added to and extended over the centuries, the earliest part of the fortifications are reckoned to be Mycenaean, dating back to at least the 12th Century BC.  We visited world-famous Mycenae in the Peloponnese the following year and, with the possible exception of the Lion Gate, were underwhelmed by it having been to the Paleocastro on Nisyros.    I head up to the Palecastro at least once every time I visit the island and it never fails to impress. 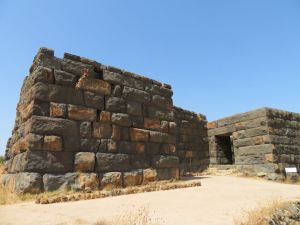 Looking back through the entrance, nearly 10 feet high, walls well over a metre thick

Huge stones are cut to precise shapes to fit tightly together, no mortar or cement used. 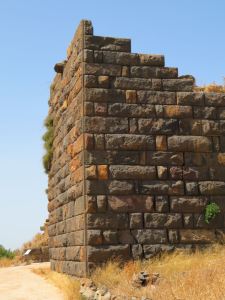 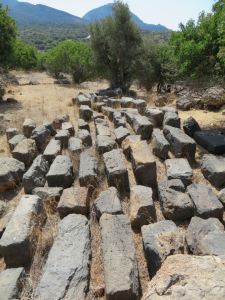 I think it improbable that it was occupied by the Crusaders who built or re-fortified a number of locations on Nisyros such as the Mycenaen fortress at Stavros.  Two main reasons for thinking this.  First, it is much too big to be defended by the size of force that would have been committed to such a small island with limited strategic value. It seems more likely that it was part of a communication network based on signalling from one island to another, the main fortification being on Rhodes with relatively small forces defending the smaller islands.  Second, the nearby castle of ‘Enetikon’, now partly occupied by the monastery dedicated to the Panagia Spiliani (the Madonna of the Cave), was clearly occupied by Crusaders as evidenced by the escutcheons built into its walls.  Enetikon is a much more appropriate size of defensive site.  The Paleocastro relates in size more to the vast agricultural production from the thousands of terraced fields, supporting and defending a population which must have numbered many thousands. 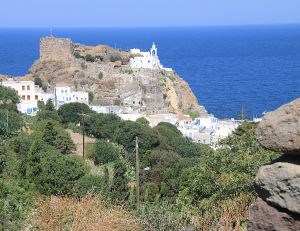 At the other end of the size scale is the fortress of Parletia.  Once on the main route between fortifications at Nikia and Emborios on the caldera rim, now Parletia can only be reached by a rapidly deteriorating path which becomes more challenging every year.  It’s a trek I do at least once every year but, in contrast to the gentle stroll on a stone-paved kalderimi up the Paleocastro, I would hesitate to take others whose abilities I don’t know to Parletia.

Not only that but to get into the fortification involves modest climbing ability partly on constructed fortification which are increasingly unstable.  Compared to the Paleocastro, Parletia is tiny, built into lave pinnacles with a series of small unconnected stone walls between the natural rock barriers.  More than any other there is a sense of this being a castle in the air.  Standing on the edge looking down to the caldera is breathtaking

I’m not sure what it’s purpose was.  It has no views of the surrounding sea-lanes and so cannot serve as a viewpoint.   It is entirely inward looking, overlooking only the caldera and its rim.   It is in direct line of site of other fortifications at Nikia, Emborios and Stavros all of which have views of the sea approaches as well as the caldera and the mountain passes into it.  But they can all be seen from each other as well so can have direct visual communication with each other without the need for a relay from Parletia.  Maybe its purpose was to defend the routeway.

There is no doubt that it was indeed a fortified site, albeit very limited in extent.  On the east and north sides the crag is virtually unclimbable.  On the west and south sides short sections of wall have been built not to retain soil for agricultural terraces but to augment the natural rock defences. 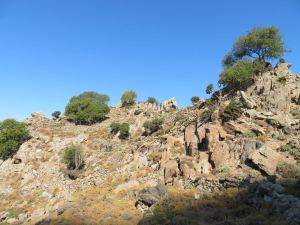 Approaching Parletia on the path from Nikia, short sections of stone walls on the flank 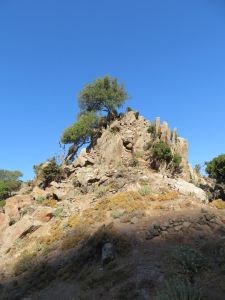 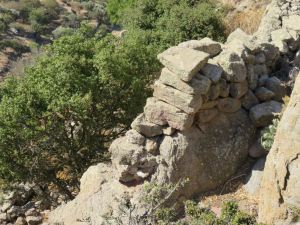 Remains of one of the short sections of wall, not built to retain soil in a terraced field but for defensive purposes

Establishing beyond doubt the fact that this was an occupied site, the remains of what may be an old altar

…….. and a bowl carved out of lava.  I found part of a similar bowl in a limestone-built fortification on Symi 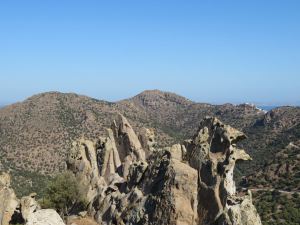 Guarding the site, a huge lava dragon, Emborios in the background

1 Response to Nisyros:  castles in the air