Banff, Canada: After The Fire

The fire on the night of 28/29 December dramatically changed the focus of the trip.

With nothing but what I was wearing when I evacuated the hotel into -25oC, the priorities for the next few days were somewhat heavily circumscribed: replacing toiletries; replacing basic clothing; applying for emergency passport ….. tedious, exhausting, but necessary stuff.

With two and a half weeks still to go it also meant replacing basic skiing gear, the main purpose of the trip. Additionally, I replaced my netbook computer so I could communicate with the outside world but not the smartphone because in Canada they are all locked to a provider, there is no sim-free option.

After spending more time shopping than during the last 25 years in total, I had enough to have a change of clothing and to get back to skiing, though I didn’t replace any of the winter trekking gear.

I lost both my SLR camera and the compact (Canon SX720) I carry in my hand in Greece and my pocket in the Rockies.  That meant that I also lost the memory cards with all the shots I had taken up to that point.  They were downloaded every day onto the computer but ……   The two which I posted on my blog to wish folks a Rocky white Christmas are the only Pre-Fire photos to survive from the 2016-17 trip.

So, having given up on the shopping and with painful new ski boots adjusted almost every day, I got back into the mountains and managed to take a few phots to look back on.

The burnt-out top floor of the hotel from Banff Avenue,  blue sky showing through the smoke and water stained windows.  My room is on the left.

Looking along the length of ‘Downtown’ Banff Avenue from my new room in the sister hotel.  That’s not smoke but air venting into intense cold even in the mid-afternoon sunshine. The road covered in compacted snow from frequent fresh falls.

At the top of the other Banff Avenue, an easy groomed run at Sunshine Village.

Deep snow at the top of Sulphur Mountain

Some of nearby peaks are dramatically craggy

The new interpretation centre and restaurants seen from Sanson’s Peak 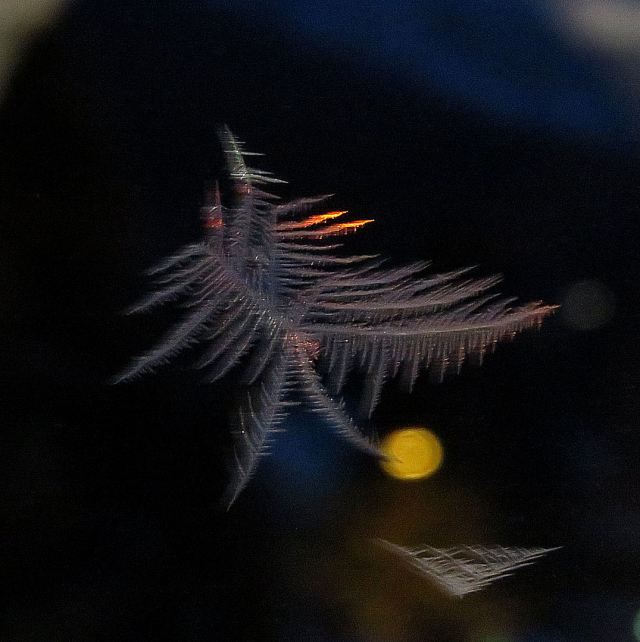 …. which also lights up ice crystals inside the double glazing