Nisyros:  Rock around the volcano

Signs on roads and footpaths around Nisyros point to ‘The Volcano’ in English and in Greek.   Arrive by boat in the harbour and you are offered coach trips to The Volcano.  A bit misleading that because by the time you arrive you are already standing on it.  The whole island is a volcano.  Or more strictly speaking, it’s part of a very much larger volcano which blew its top many years ago when it encompassed what is now Nisyros and the western end of Kos, the sea between being the now submerged caldera.

The ‘remnant’ volcano of Nisyros is classed as potentially active and is still grumbling away.  Thermal springs emerge around the island at places such as Mandraki’s Hochlalos Beach, Avlaki, Palloi and the medical spa at Loutra.   Indeed Hippocrates, he of the oath, sent patients from Kos to the spring in a cave in Palloi, also used by the Romans.

What is referred to as ‘The Volcano’ is the Stephanos crater at the western end of the 3 kilometre-long caldera, adorned by a coach park and taverna, but there are a number of other smaller craters and active hotspots nearby.  The main caldera, Lakki, is the most seismically active but there are a number of smaller apparently dormant calderas including those at Nifios, Kato Laki and two between Siones and Evangelistra.

Zooming in on the Stepanos, Polyvotis and Alexandros craters from near Nikia, 1000 feet above 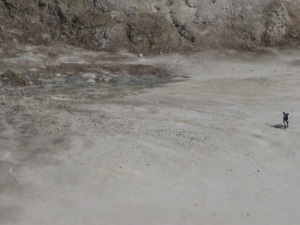 …. and zooming in still more showing people on the floor of the Stephanos crater ….. it’s big! 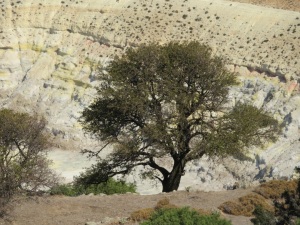 Part of the wall of the Stephanos crater

These calderas offer some of the most diverse and spectacular trekking I know, much of it on ancient routeways because the immensely fertile volcanic soils meant the island was once very densely populated.  Old pathways and kalderimia link ancient settlements, habitations, chapels and monasteries.  It’s a great pleasure to revisit old favourites and discover ‘new’ routes.

This year much of my walking focused on the main caldera and the active craters, old pathways going around much of the caldera at a high level with kalderimia zigzagging down to the caldera floor from the villages of Emborios and Nikia, and the monastery of Agios Stavros perched on the rim.

I am a self-confessed ‘vrachophile’, a neologism derived from the Greek βράχος  (vrachos) – a large mass of rock, and φίλος (philos) – friend. Sounds so much less suspect than petrophile, πέτρα (petra) being a stone or small rock.  I don’t go around hugging rock, certainly not when there may be anybody looking or unless I’m climbing, but I’m fascinated by them and do go around photographing them.  Repeatedly.  Obsessively.

This blog is about rocks around the caldera on Nisyros not from a geological or geomorphological perspective but aesthetic, a fascination with shape and texture, imagination running riot.

The whole of the island is made up of volcanic rock varying from famously hard black obsidian to very soft off-white pumice.  Some of the most spectacular features are lava pinnacles, thrust upwards during eruptions and sculpted into fascinating and weird shapes by gases exploding out of them.

A huge pinnacle like a beaked dinosaur towers above the path on the way eastwards from Nikia, touched by early morning sun 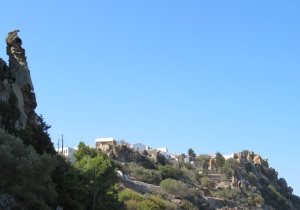 Looking back to Nikia, the lava beast seems to be haughtily standing guard over the village 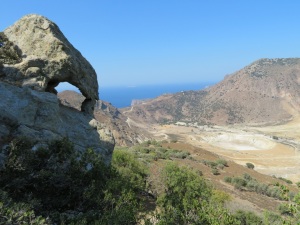 A short distance further and another prehistoric beast tops a crag above the old pathway, Stephanos crater 1000 feet below.

Then the dramatic pinnacles of Parlettia, topped by an ancient fortification still in use during the Crusades.  Another prehistoric beast looks out over the caldera

The access to Parlettia involves a modest rock climb, the crags reinforced by stone walls

….. eying the beast watching the caldera

While near Emborios a giant hound keeps watch

Detail of part of the inside of the bubble

Drop down to the caldera floor from Nikia and turn west towards the Stephanos crater and cross barren desert to reach a ‘hotspot’ with bare rock heavily coloured by sulphur and fumaroles encrusted with needle-like sulphur crystals formed as boiling gases emerge.  The surrounding rock is heated not only by the sun from a cloudless sky but by the underground furnace that is the magma chamber.  It’s too hot and sulphurous to linger long but it draws me back time after time.

As it nears the caldera floor the kalderimi, for most of its way rough stone paved passes through a zone of recent activity and strewn with loose rock encrusted with yellow, white and red sulphur

Looking up one of the small sulphur encrusted gullys

Heading towards a hotspot

Approaching with some circumspection shows delicate and colourful crystal formations

Looking down the gully to the main caldera floor, finer material forming a stream bed

The caldera floor near the main crater, true desert

1 Response to Nisyros:  Rock around the volcano