I’m back in Grey Britain now having bid a nostalgic “au revoir” to Banff and the Rockies.  It was not sunny the whole time I was there, thankfully now and again clouds moved over from the west and dropped snow to refresh the ski slopes and hiking trails.  But there were a good number of blue sky days making for a memorable visit.

The day I flew home I finished my breakfast, went back to my third floor room looking out across the roofs of the town to the sun lighting up the clouds beyond the peaks and then headed straight out from the hotel with the camera.

As the sun rose above the mountains to the east it stopped flaming the clouds and gradually started to set the peaks to the west on fire.

I miss this place.

Cascade Mountain at the end of Banff Avenue

Strong winds blow the fine powder-snow off the peaks 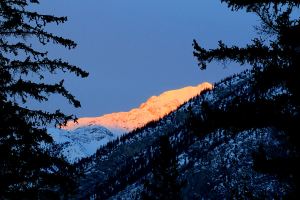 More and more peaks lit up

Long shadows on the frozen Bow River a couple of hours later, the fire gone out leaving crisp white and blue