Symi: to the past and on the edge

I’m back home now, trying to stop the cold seeping into my bones and prevent the grey seeping into my brain.  But there are many bright, warm memories of Symi to look back on, more Symi-based blogs to post.

One day I trekked up to the main ridge to visit the Byzantine stone wine presses in the Kourkouniotis area of the island.  With close to 2000 feet of height gain much of the route is difficult walking over very rough, rocky ground but the landscape is dramatic and the whole route very satisfying.  Eventually it reaches The Tarmac, the ridge-top road and, though sections of it can be by-passed, there is necessarily a short walk along it to the fortress-like Megalos Sotiris monastery and the start of the very good, easy-gradient path to the wine-presses.

It is estimated that there are about 130 stone wine-presses on Symi, some 47 of which are in this area.  Eleven have been restored by the efforts of one man, local enthusiast Sarantis Kritikos, in a six month period between October 1994 and April 1995.  These give a clear insight into how the wine was produced.  Geology is the key, flat slabs of rock have vertical slabs cemented in a circle around them supported by dry-stone walls up to 60 centimetres thick with an internal diameter of about 2 metres, sloping to allow the ‘must’ to drain into a channel called a ‘linos’.

Symi earned its reputation for production and export of fine-quality white wines in earlier centuries.  The first reference to Symi wine is made in 1420 and it is likely that wine was produced here long before that, archaeological finds having been dated back to as early as the 11th century.  Other historical references show that production continued for some centuries afterwards.  However, pirate activity harassing trade in the Aegean put a stop to exports and so production declined sharply, becoming limited by the mid 19th Century to domestic consumption only.

In his short book ‘The stone wine presses of Symi’ Kritikos estimates that with 130 wine presses and 2 or 3 people treading each there were probably 2-300 involved in production.  He also estimates that each produced 100-150 kilos of wine a year (in Greek restaurants and tavernas wine is ordered by weight, 1 kilo equals 1 litre) with a total output of maybe up to 15,000 litres a year.

The restored structures can be seen along the path from Megalo Sotiros to the much smaller monastery of Mihail Kourkouniotis.  A couple are alongside the path but most are up to the right.  It was interesting to sit on the slabs, munch a banana and speculate how widespread must have been the cultivation of sufficient vines to feed these presses.  Now the Kourkouniotis area is mostly covered in cypress woodland but in earlier centuries much of it would have been cultivated.  Too comfortable on my perch soaking up the Autumn sun to go off foraging through the trees for remains, I resolved that next year I’ll go back and wander around to investigate.

Detail of one of the restored presses showing the flat slab floor, the slab-and-drystone walls and the outlet for the must

What I did this time was to wander higher up behind the restored wine-presses beyond the flat slabs of rock to more broken limestone to the reach the top of the ridge looking down to the coast and the Panormitis monastery.

Zooming in on the Panormitis monasterey

From the ridge-top I dropped down to the path and back to Megalo Sotiros monastery.  Usually the enclosure is locked.  On one occasion earlier this year it was open as was the entrance to the courtyard but a priest was making his tea and expelled us very grumpily. On this occasion it was open and the guy who was doing the maintenance/cleaning not only welcomed me in but unlocked the door to the church with its impressive Hochlakos-mosaic floor and well preserved frescos said to date back to 1727.  The fine craftsmanship of the wood carving of the iconastis includes repeated detail of vine leaves and bunches of grapes decorated with (what I think is) gold-leaf, an indication of the wealth once derived from wine production in the area.

Entrance to the fortified enclosure 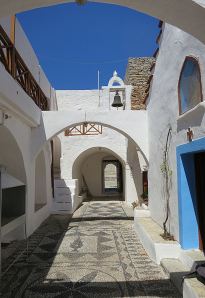 One of the many frescos, nearly 300 years old

One of the panels in the iconastis, this one depicting the Archangel Michael, edged by fine wood carving

Detail showing the vine-leaves and grapes

When I left the monastery I walked the short distance behind it to the edge of the breathtakingly steep drop down to the coast. There then followed an interesting bit of off-piste.

First, I carried on up the edge of the drop to the top of the crag, capped with razor-sharp limestone with dramatic views in all directions. 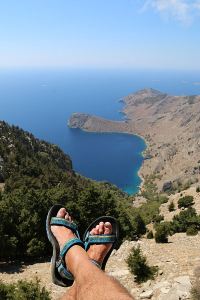 Photographer on the edge, with a new pair of sandals

At the top of the razor limestone crag

Looking towards the mountain-top monastery of Agios Stavros Polemou 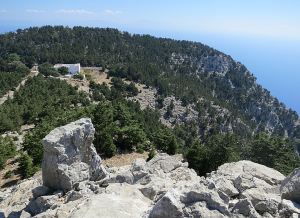 Looking back towards Megalos Sotiros

On the way up I had noticed stone-walls on narrow terraces lower down the cliff so I then climbed down to investigate.  A small single-room house was built into the rockface with stone-walled enclosures partly as retaining walls to create terraces, partly to pen in animals.   Not a place to go sleep-walking.  Once upon a time, in the distant past, I lived in Mid Wales with friends who kept goats which were forever jumping over the fence and escaping up the mountain: we had to go chasing after them, I was quite fit in those days.  If they jumped out of these enclosures they would meet a sudden a very sticky end.  I certainly wouldn’t go chasing after them if they survived.

Single-room house built into the cliff

Cupboards built into the cliff-wall: these don’t come in flat packs with an allan-key

The narrow path on the way back to the monastery 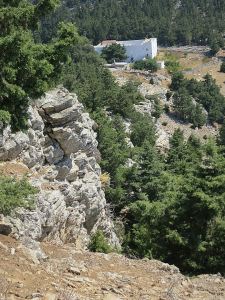 …. which soon comes into sight