With the weather largely grey and wet, expected to be an increasingly typical manifestation of climate change in northern Europe, combined with preparations for Christmas and meeting up with friends before I head off on my travels again, there has been little incentive or opportunity to go walking in the mountains recently. But fortunately the passage of brief sunny slots in low pressure frontal systems has coincided with the sun rising above the ridge at the same time as I’m rising from Morpheus’ grip and in the course of a single week produced some dramatic skies as I blinked blearily from the balcony at the back of the house.

One day, after a spell of particularly strong winds, I walked home from the local supermarket via the ridge top, starting in bright sunshine and finishing little more than an hour later under heavily overcast sky.

Blue sky as I left the house, and a tree cottoneaster which the birds haven’t yet stripped of berries 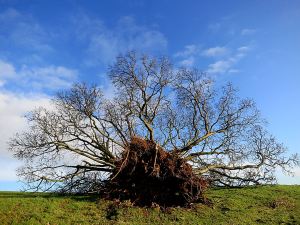 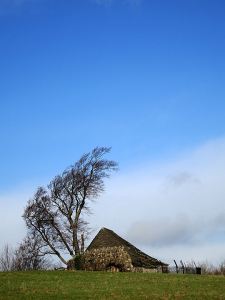 The Shell Grotto and its wind-blasted companion

….. then looking back and the sun has been all but obscured by rapidly advancing stratus cloud

I look forward to more mountain activity early in the New Year.  Hopefully with some proper winter weather: hard frosts, snow, blizzards and the like.

In the meantime ……. Seasons Greetings.