For over two weeks now I’ve been non-stop busy in the garden.  The physically most demanding job has been cutting hedges because some of them are 15-20 feet high.  That means erecting, dismantling (English is sometimes very strange, why not ‘mantling’ and ‘de-erecting’?) and moving a scaffolding tower several times, wielding the hedge trimmer with a 42 inch cutting bar from the top of it.  The cutting time is very short compared with the preparations and the tidying up afterwards.   It’s hard work but the resulting neatly shaped trees make it worthwhile

A great pleasure has been harvesting the crops which I sowed in April and which are now ready. Climbing French beans and golden courgettes need to be picked every day, beans blanched and put in the freezer or added to the courgettes and made into fasolakia, one of my favourite Greek dishes.  Potatoes need to be harvested before I go away again, dried, ‘hardened off’ and put in store.  Very satisfying.

The produce from just one brief picking session

There has still been time to occasionally wander up to the top of the mountain behind the house, passing the Folly Tower on the shoulder of the ridge, the boundary of the Brecon Beacons National Park,  and then on up to the trig point on Garn Wen.

However, visitors for the weekend prompted another visit to ‘Waterfall Country’ further west in the National Park.  Though it has rained a fair bit since I arrived back the total amount has not been very great and it was therefore a surprise to see that the flows were in no way diminished from the last time I was here in November last year1.

What was a surprise was the large number of people walking in the area, many of them visitors rather than locals.  In November I had the entire place to myself.  Generally I prefer my landscapes devoid of people and I will sometimes wait until I can photograph features with no visual distractions.  This time there was no prospect of that, there was just too much traffic on the paths and clustered around the falls.

Then it struck me how great this was.  People out enjoying the natural landscape rather than stuck in front of some screen or queuing up in an out-of-town shopping centre, an increasingly common leisure activity on summer holiday weekends.  When I was a kid I used to do this sort of stuff all the time, catch a bus into Manchester, a train to Glossop or Hayfield and wander the mountains of the Peak District, swimming in rivers or lakes wherever possible.  When I was in university a group of us went ‘aqua tramping’ down these very same rivers, the Hepste, Mellte and Nedd Fechan, wearing shorts, T-shirt and old trainers.  When we had proper heatwave summers few things were more enjoyable than wading and swimming in the water, sliding down or leaping off the waterfalls into the plunge pools below.  There was one outdoor pursuits group doing just that now, clad in wet-suits against the cold water on a distinctly cool day and wearing helmets against the distinctly hard rocks.

Given the fear of the Damocles Sword of litigation which has crossed the Atlantic and seriously infected the UK it is encouraging that a spirit of adventure still persists.  Truth be told I had to resist a very strong temptation to strip off and jump off the ledges into the plungepools myself …. but fear of arrest for indecent exposure held me back.  We contented ourselves with walking behind the crashing water of Sgwd yr Eira. 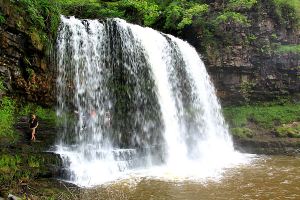 Casually emerging from behind the fall 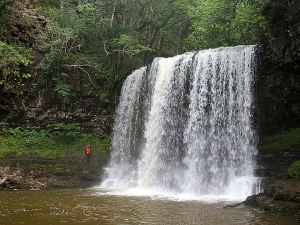 …. and viewed from the opposite bank 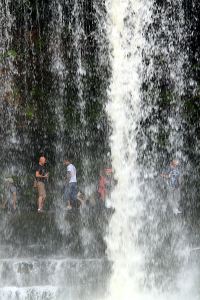 The constantly falling water is hypnotic, creating a dreamscape 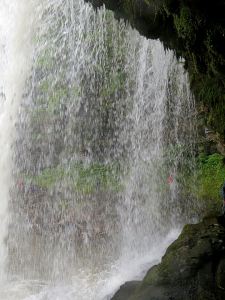 Looking along the approach path from the ledge behind the curtain 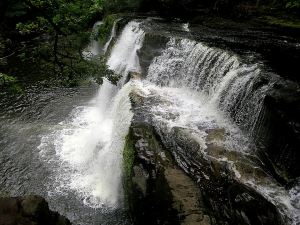 The pools and shallow falls are a great place to play

“Alright lads, one after the other, shuffle along and jump” 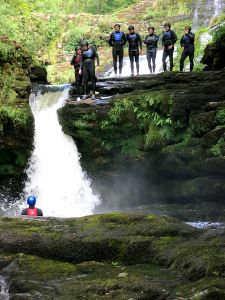 In just a few days I’ll be back in Greece and the pleasures of wandering the slopes of the volcano that is Nisyros, swimming in the Aegean and basking in the sun.