Tilos: a coast walk and making like a commando

It’s not that I’m contrary or perverse but a notice saying that the coastal path is closed due to a landslide is nothing but an invitation to go and look.

The path leads to Red Beach and the further, less red, beach of Lethra both of which had become increasingly popular after the island council improved the path along the cliffs about a decade ago.  One of their major attractions had been diminished by this improvement but only in the sense that they could no longer be regarded as secluded and so had unfortunately become ‘textile’.

The path begins just after passing the massive ‘Ilidi Rock’ luxury apartment complex, climbing the cliffs at one end of the bay and known disparagingly, at least by those who can’t afford to stay there, as ‘Alacatraz’.

At that point a string had been draped loosely across the path and an A4 notice stuck to a terracotta building block in the middle with the clear and eminently sensible announcement that if you walk this way it’s your own responsibility and rather beautifully and enticingly advises that “YOU WILL HAVE TO … CLIMB! (like commando!!!).  Apart from the killing I reckoned I could do the commando bit.  Indeed I was very much looking forward to it, almost dribbling with excitement at the prospect. .

This is your final warning!

There has indeed been a landslide, quite a massive one in the context of the path which has dropped a good few feet, with loose rubble at each end of the slip.  It presented no problem to us aspirational commandos, the only bit requiring just the tiniest amount of climbing skill, rather than simply care and attention, being at the far side where there is a one-move climb from the top of the rubble back onto the original path.

The one end of the collapsed path

There are bands of weak rock in the cliffs along this stretch of coast and I had been wondering for some years how long it would be before slippages which nibbled away at the width of the path every winter would render it impassable.  This landslide was something entirely different.  Shortly after regaining the path I came across one of the points where erosion of a band of weak, shaley purple rock has narrowed the path to little more than a 18 inches.(45cms) fromm its more usual 1½ – 2 metres. 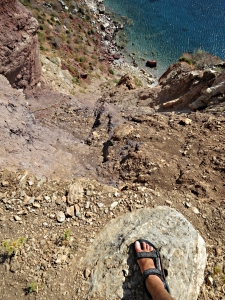 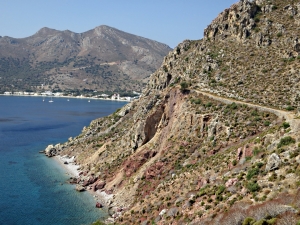 Looking back at the weak, shaley band and the tiny beaches far below

The rest of the walk was uneventful.  It’s not the most dramatic coast path I know but it’s certainly up there with some of the best, including the Pembrokeshire Coast Path in Wales.  A broad path which until the landslide and the nibbled-away width would almost certainly qualify as an “accessibility path” attracting EU funding, provided you had assistance or the strength and tenacity of Tanni Grey-Thomson (now Baroness TG-T in recognition of her achievements).  It rises to some 100 metres above the sea with dramatic views along its whole length. 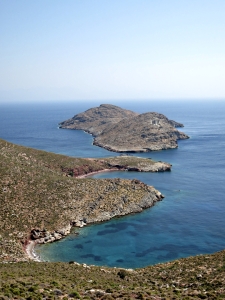 Just one of the views along the coast path

Red Beach, reachable only by narrow, winding, rocky, cairned side-path, was completely deserted and the much larger Lethra had only one other person at the far end.   He was significantly overweight, hobbling on a walking stick with a damaged leg, had set out to walk the coast path, failed at the one-step climb and had walked right round via the main road and down the top of the gorge to get there.  He complained that his body was giving out. Respect for determination.

After lazing around, swimming, playing with stones and generally dealing with the tedium of beaches, I headed inland up the bed of the gorge to the deserted village of Micro Horio which I banged on about the other day.  I love gorges and though this isn’t one of the biggest by any means it’s good fun.

Looking along the length of Red Beach 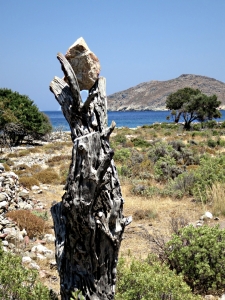 Some creative person wedged this big stone in a dead olive tree at the side of the final section of path to Lethra Beach. 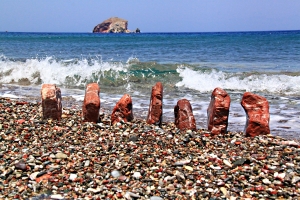 …. and I just played with stones

I have been down the gorge a number of times before but this was the first time walking up it and, not surprisingly, it gave a quite different impression.  The difference was heightened by the fact that for the first time I saw the upper sections with pools of standing water, a consequence of a long, unusually wet winter here.  Springs which have normally dried up by mid-July are still running though the spring at the top of the gorge hasn’t dried up at all in the 13 years I have known it. 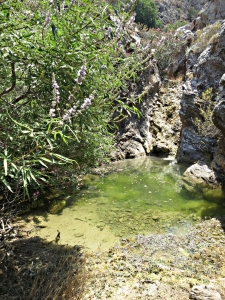 One of the standing pools of water

Photographer in the water