Tilos: sharply to the top

I’ve mixed the words and the pictures in this post so it’s more trouble to avoid the words.  I’m malevolent like that!

Friday night and I went for a meal with friends who live on the island.  Clichés abound to describe the evening ranging from the prosaic English ‘convivial’, to the probably more accurate undertones of the Irish/Scottish ‘a good craic’.

The high spot was perhaps when our hostess told the story of a chicken-keeping friend in Scotland who, expecting guests for the evening, went shopping leaving the instruction for  her husband to “pull the neck of a chicken and pluck it” by the time she arrived back.  On opening the fridge door on her return, the naked bird jumped out and waltzed across the kitchen floor. I must admit that rather than being economical with the actualité, at this point1 I maybe straying slightly beyond it as I don’t know what dance-step the chicken did. But I guess that though it was somewhat perplexed it was  glad to be out.  If you have never tried to pull the neck of a chicken you won’t know how believable this tale is.

Sometime well after midnight when thoughts were turning to wandering back to our various temporary refuges someone asked where I planned to walk on Saturday.  In a  fit of bravura and optimism I said that I intended to climb 494 metre Oros (Mount) Koutsoumbas, the high point at the south end of the island.

Needless to say, an early start it wasn’t!  When I struggled free of Morpheus’ grip I scaled back my intentions.  Doing just part of the walk to suss out the path seemed sensible.  That was the rationalisation anyway. I deferred the start even more by calling in Roulla’s in the main square for a fresh orange juice and then barely 30 minutes later called in the ’Faros’ restaurant/taverna at the far end of the bay, the last vestige of civilisation en route, for a frappé.    But both visits did the trick.  By the time I reached the Faros the fresh orange juice worked its wonders and I shed about a pound in weight in a couple of minutes and then the caffeine worked its magic and I was …. waltzing along.

Looking across the bay from the Upper Terrace of my apartment. the ‘Faros’ is the furthest building at sea level

Newly invigorated, I reinstated the original plan even though by now it was 11.30 and temperatures were soaring beyond 35 degrees to who knew what.  At least it would be windy on the way up as it was blowing a hooley2 all the way along the spectacular coast path from the tiny chapel of Agios Ioannis.

Looking from the pinnacle to the very goodcoast path

On the edge. In places the drop from the path is dramatic

Some of the views to the sea are stunning

I reached the abandoned village of Ghera, the start of the climb, in good time. 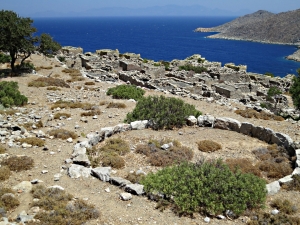 Looking across the top of the abandonned village of Ghera

Then over-confidence took control.  I have climbed the mountain 5 or 6 times and on most of those occasions have had trouble finding the path.  Being older, wiser and assuming that I now knew what I was doing, I plunged on through the dense and aggressive vegetation to cross over the narrow gorge  …. at the wrong point. I got it wrong again.  I blame it on goats excavating the path to dig for roots in the parched summer months and malevolently knocking over the carefully positioned way-marking cairns to further confound the issue.

I know the mountain well enough to find my way to the top despite not being able to see the summit until the last few hundred metres but it was hard work, especially so in the middle of the day.  Even the goats were holed up in the shade somewhere, presumably worn out after digging up the path.  Very little of my way to the top was on the ‘proper’ path.  Most of it was up razor-sharp limestone, picking a way between universally aggressively sharp vegetation.  The rock was preferred at all stages, however sharp and steeply angled.  I pride myself on being a rock climber with no aspirations to vegetation climbing.

The top of the mountain is both a minor triumph and disappointment.

Triumph because, with the additional 160 metres of ascent along the coast path to get to the mountain and a total of about 10 kilometres each way (measured on the pedometer not the map) it’s good to get there.  Particularly as the entire walk was done in the heat of the midday sun when only mad dogs and Englishmen should be out.  As a Welshman I suppose that aligns me with mad dogs.

Disappointment because the top is almost entirely taken up with the remains of a telecommunication station.  A large unsightly concrete building at one time housed all the electronic kit and provided accommodation for the guys who must have trudged up there for  week-long shifts.  Now the building is open but inaccessible because of the retching stench of decades of accumulated goat shit.  They could quarry the stuff like they do with guano in Chile.  Best be careful though, Chile went to war with its neighbours in the second half of the 19th Century partly/largely over guano, arguably the first and only Bird Shit Wars.

To the side of the concrete block is the remains of a telecomm mast which adds some drama to the summit and the prospect of a climb up a steel ladder to reach a platform another 50 or so feet higher.  I excuse my failure to make the climb on a) the fact that it will hardly add anything to the potential photography and b) the wind is always howling and the whole structure, abandoned decades ago, seems to hum and shake. The real reason is that by the time I get to the summit I’m knackered and just want to sit in the shade, slurp an overheated banana and drink iced water which I have carefully nurtured for this very pleasure.

The derelict telecom mast on the summit, not without its drama

The views to the south are as dramatic as they come.  Just short of 500 metres straight down to a clichéd-blue sea.  In a strong, swirling wind I daren’t get too close for my ‘on the edge’ photos’.

Looking from the top to the start of the coast path, Agios Ioannis 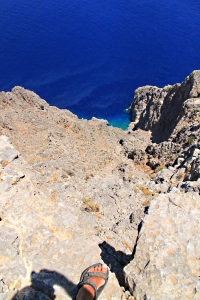 No messing …. 494 metres straight down

The way back down is on the path, well marked by small cairns which I assiduously add to, but the in final few hundred feet there are many options and no clear marking.  It’s easy to pick the right option going down but turning round to try to locate the right route into the thin path going uphill is impossible.  I’m going to have to try it again before I go home.  It’s a matter of pride!

But isn’t that what it’s all about?  Satisfaction in achievement! 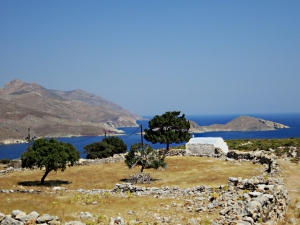 The welcome sight of Agios Ioannis, straightforward from here

1  Alan Clark, a minister in Margaret Thatcher’s Government, rather than admit that he had lied to Parliament, said during the Matrix Churchill (Arms to Iraq) Trial (1991/92 ?) that he had been “economical with the actualité” , embellishing the phrase “economical with the truth” introduced by civil servant Sir Robert Armstrong in the ‘Spycatcher’ Trial in Australia in 1986.  Can you trust any of these guys??

2  This was intended as a reference back to the craic the night before BUT it’s amusing to Google the phrase, as explanations suggested for its etymology include: a wild Irish party; a strong down-river wind in Calcutta; and an obscure reference to Julio Inglesi and a lady of the night.

2 Responses to Tilos: sharply to the top