Sunday and I had to get out into the mountains.  All week I had been concentrating on construction work in the garden, laying paths and humping rocks around for landscaping and I needed to stretch my legs, get to the top of something. Despite the weather.

From Salisbury Terrace, a tiny settlement high on the western flank of the valley of the Afon Lwyd (the ‘Grey River’) I dropped down to the valley floor and then up the other side to follow the easternmost ridge of the South Wales Coalfield southwards.  The ridge-line, mostly at about 1,500 feet dropping down to the Folly Tower at about 1,000 feet, is the western boundary of the the southern tip of the Brecon Beacons National Park and the views are expansive.  But not on Sunday.  Low cloud was just above the ridge and as it swirled about, depositing alternately drizzle and light rain, visibility and clarity were considerably reduced.

The top of the path down to the valley floor, heading for the ridge-line opposite

After the steepest part of the climb there is a sink hole at the side of the path, about 15 feet deep and always dry even in the wettest of conditions.  On the furthest side is a trickle of water which simply disappears underground through a loose jumble of rocks.  On Sunday the volume of flow was about equivalent to a domestic tap but, as on occasions when I’ve seen water gushing into it after prolonged heavy rainfall, no sign of any water body building up.  My guess is that it joins underground passages which are part of Ogof Draenen (Hawthorn Cave), a system which suddenly ‘went’ in October 1994 after years of unproductive digging of boulder-choked passage and now, at 66 kilometres, the second longest in the UK.  There is at least one other sink hole in this part of the mountain and I’m told there is a resurgence in the Afon Lwyd a few kilometres downstream.  Needless to say I stopped for another look.

The sink-hole, water disappearing down the jumble of rocks at the back 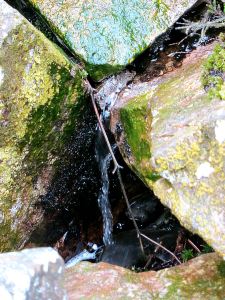 Close up: water volume about that of a domestic tap

As I reached the ridge-top winds were light and sky larks were very much in evidence, singing their hearts out in defiance of the cloud and the wet.  It wasn’t a day for hanging about to admire the view but I didn’t hurry, I find it deeply satisfying being on the top of a mountain in conditions which keep everyone else indoors.  John Ruskin said: Ther is no such thing as bad weather, only different kinds of good weather”.  Making a practical point rather than commenting on the need for a positive attitude, it is often said in mountaineering circles that “there is no such thing as bad weather, only the wrong clothes”.  Thankfully I have all the right clothes for most conditions and the only attitude problem I have is leaving the mountain top and coming back down to street level.   I took my time.

Not even the muddy bits put me off.  Note trousers billowing in the strong wind

As I headed down the ridge I looked over my shoulder, a black cloud hanging with rain was chasing me southwards before eventually catching me up.  As it did so the wind picked up to gale force and the skylarks dived to the shelter of the low moorland vegetation. 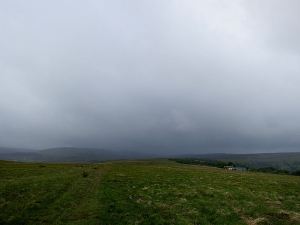 Black cloud hanging with rain chasing me down the ridge.

Getting lower into the ridge-top fields, and to the west another rain shower chokes a side-valley

In contrast seagulls, about 100 of them, took off to play in the squally wind accelerated by the venturi effect as it hit the ridge, eddying as its flow was distorted by trees and rock outcrops.  The gulls soared and swooped, wings motionless, borne up on rising air.  I love watching them and always wish I could fly my paraglider as effortlessly and in such gnarly conditions.  I have flown with kestrels but only in mellow conditions, paragliders stay in the bag in conditions like this. 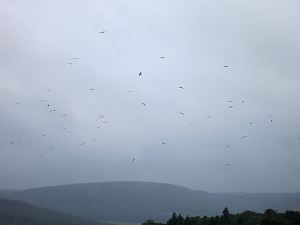 Seagulls playing in the swirling wind

As I reached the Folly Tower close to the end of the ridge the rain eased, just a few bursts drumming onto my cag, and a thin blue line appeared briefly over the Bristol Channel.   I dropped off the ridge, walked the couple of hundred metres back to the house and sat in the garden in the sunshine between whizzing clouds.

On another note, the health issue which precipitated my early return from Greece and prevented me returning at the beginning of June has been resolved.  Return visit to the hospital in 6 months. No further medical intervention required in the meantime.  A relief.

Now I’m checking out options for going back to Greece.  The original plan spanned two months so is nolonger viable but I’m looking at alternative itineraries.  One problem is that I will be travelling in ‘High Season’ with correspondingly high prices for accommodation.  It may be that I decide to stay at home and do more wild walking in Wales until I return to Greece at the end of August (already planned and booked).