From Rhodes to Symi: new beginnings and a whiff of death.

No problem getting to Rhodes’ Colonna harbour for the 08.30 high speed cat to Symi , nor in buying a ticket (more about which in a later blog …. maybe).  On the way it was heart warming to see a local fisherman tenderising an octopus on the harbourside just inside the port gates, fingers inserted inside the body lifting it to arms-length overhead and then splatting it down on the stone wall in a 5-second iterative rhythm.  Apologies for offending the sensitivities of vegetarians but I’m encouraged by generations- if not millennia-old traditions being kept up.  (I must add that I don’t extend the same tolerance to the likes of fox hunting, only to food production, matters of personal/family/community survival).

Arrived on Symi 09.30 and, only pausing to greet my old friend Takis (in traditional Old South Wales he would be known as ‘Takis the Leather’.  Great guy.  Fabulous craft and art.  Now a TV personality), I shouldered my 30 kilograms of baggage and walked up the 100 metres of steps of the Kali Strata to Horio and the Hotel Fiona.

Many of the businesses around the harbour are not yet open but everywhere there was the sound of frantic sawing, hammering, sanding and the smell of painting as preparations are made for the coming summer which in weather terms has arrived unexpectedly.  For a small island like Symi, after a winter with no income, the cleaning, painting, freshening all carry the frisson of excitement of a New Beginning.  “Maybe this year things will pick up!!”

Until the last few days it has been wet and dreary in the Dodecanese but now it has gone straight to summer.  Cloudless sky and temperatures rising rapidly from overnight 20oC made the task of preparation possible as well as urgent with Easter looming. 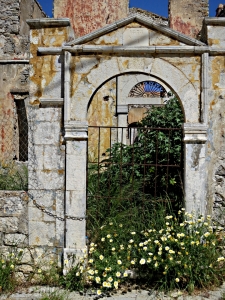 Built in the 19th Century, derelict since damage in WW2, today brightened by floral threshold 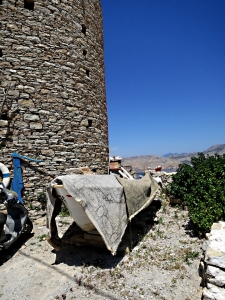 carpets dragged outside a restored windmill to ‘air’ after a wet winter indoors, just one of many signs of getting ready for summer

The arrival of summer in April also made the walk up the Kali Strata ‘interesting’ in the mountaineering sense.  I may have shrunk slightly from 6 foot tall but I’m of slight build  and 30 kilos is not far short of half my body weight.  Coming straight from temperatures closer to zero in the UK with little opportunity to get out walking in the mountains meant I am not only unfit but not acclimatised to the heat.  Presumptuous I know but surviving 100 metres of laden step-climbing confirmed my assumption that whatever I die of it’s unlikely to be a heart attack. Though, despite the old adage, I sweated like a horse rather than perspired like a man (a lady would have merely glowed but I couldn’t bring myself to ask a lady to carry my bags).

After cooling off and changing into walking gear I headed off to walk to Agia Marina, a small beach at the end of the headland between Yialos harbour and Pedi Bay for those who know or want to look it up on the internet.

The route is very rocky and the island council has done its best to make it impassable by planting alien shrub species which now threaten to block the path.  But the over-riding impression of the walk today was that the smell of death was all around.

This is the earliest in the year I have been in the Dodecanese islands and the difference is dramatic.  During the height of summer and through September everywhere is parched-brown and shrivelled to a crisp.  Today it was a different place.  After the unusually wet weather everywhere is greener and flowers are profuse and vivid.

The most dramatic flowers by a mile were the Dracunculus vulgaris known by many names including perhaps the most descriptive, ‘Stink Lily’.  Really an Arum not a lily, each flower can be over two feet long with a spadix ( the bit in the middle) supposed in Greece to represent a dragons tail (hence another name ‘Dragon Lily’), the beast sleeping inside the flower, tail hanging out.  If the flowers themselves were not dramatic enough the smell is even more so.  Just as a raven overhead is immediately and unquestionably identified by its basso profundo ‘croink’ so Dracunculus vulgaris is identified by its very distinctive and very offensive smell of rotting flesh.   It is rumoured that vultures circle overhead looking for the feast and even dig the plant up the find the meat. 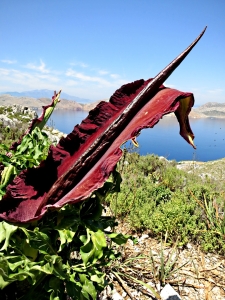 The spadix on this specimen is nearly a metre long 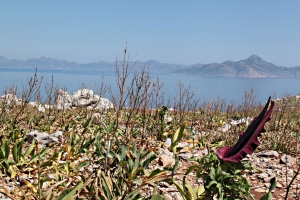 In sight of Asia Minor just across the water 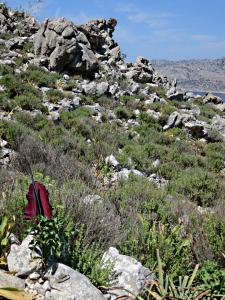 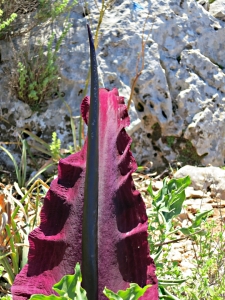 Whatever the truth of that, one thing is certain, the smell attracts flies, the plant’s pollinators, which in turn attract spiders, which attract lizards ….  A whole ecosystem is generated on Death Mountain.  The smell close to the plants is truly appalling for their short, one or two day flowering.  Definitely not suited to life as a house plant.

And I can attest to the proliferation of spiders.  The path is narrow with few alternatives and spiders spin webs of high-tensile adhesive silk from chest to head height on (slightly shrinking) 6-foot Welshmen.  Thankfully the spiders are not yet approaching the anthropiverous dimensions of the spiders in the Mani Peninsula but it is no fun being wrapped in spider-silk.  My hi-tech solution was to find a stick about two feet long and wield it in front of me to remove the web before I walked into it.  I reasoned that it was better to be thought a mad orchestral conductor rather than someone trying to pluck himself like a chicken as I tried to unwind the adhesive silk from my head, face and torso.

There were many more flowers species than Stink Lilies and many more creatures than spiders. 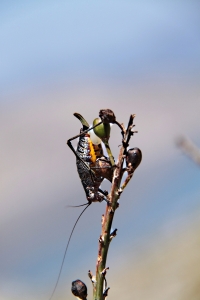 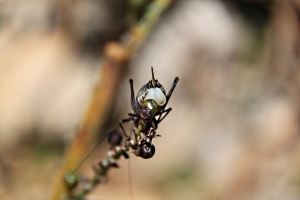 From another, more personal angle

Altogether it was a fascinating walk, rewarded at Agia Marina by the opportunity for a swim.  For the first time ever I had the place to myself, the only other people there were painting ready for the imminent start of the season. 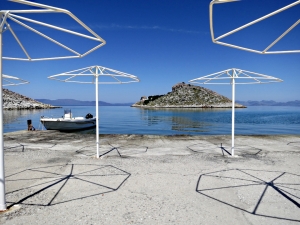 Agia Marina as I’ve never seen it before

The way back was via Pedi Bay which was completely devoid of the usual yachts floating at anchor or motoring around trying to get the anchor to bite in the deceptively deep water of the fjord.  The ferocity of the winter gales was very clearly evidenced by the shingle thrown up over the road.   In stark contrast to the summer months, local boats were pulled carefully and colourfully up on the shingle for storage out of reach of the winter gales and for painting ready for a new season.

Boats dragged up on the foreshore at Pedi

I was tired when I got back to the hotel but at least I hadn’t become prey for frustrated vultures.