Sometimes things just don’t turn out as planned.  Wednesday I had a day free of commitments so planned to take a bus up to the watershed between two of the South Wales valleys and walk back home via a couple of ridges including one in the Brecon Beacons National Park, about a 5 hour trek.  We are still in the grip of winter and, even though it was very grey, with snow lying and freezing temperatures I was very much looking forward to it.

The bus, the number 30 about which I wrote a chapter for a book to be published in the Autumn, arrived at the stop 30 seconds before I did.  The jobsworth driver shook his head at me and carried on.  I was annoyed!  The next bus, an hour later, would have meant finishing in the dark. That wasn’t too much of a problem but I was kitted up and ready to go and didn’t fancy hanging around doing nothing in the meantime.

Rapid rethink.  With all forward planning it helps to build in contingencies for when things go wrong or at least to have enough information to be able to work out alternative plans on the spot.  One alternative was to try to catch a bus and intercept the 30 at another point, a high risk strategy because I could easily end up in the wrong place if the timings didn’t coincide.  And in any case, in my annoyance I might be rude to the driver and get thrown off the bus.   In the end, after a full 30 seconds of deliberation I decided I would walk down the hill to catch a bus on another route which would take me to a different start point, a shorter walk but still on the ridge top.

Even though I walked rapidly, the other bus arrived at the other stop 30 seconds before I did.  But at least that service is at 10-minute intervals so I wouldn’t have long to wait, assuming that it was on time.  It wasn’t.

Just as I was beginning to re-evaluate the whole plan, and wonder about the meaning of life, my son pulled up in his car and offered me a lift.  He had been driving past and saw me standing abandoned by the roadside.  Sorted!  And an opportunity to have a chat as well.

The walk was great.  There was more snow on the ridge than I had expected and it had been drifting in the wind into weird shapes and patterns.  Surface water had frozen like works of modern art.  It was slow going, particularly as I didn’t stick to the path but wandered all over the ridge top with the camera,  repeatedly telling myself that I needed to stop messing about and start to make some forward progress. 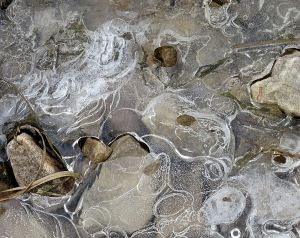 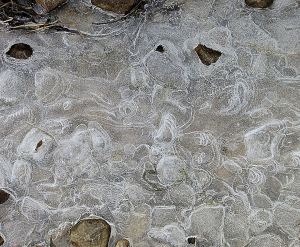 ….. should be hanging in a gallery of modern art

Some of the icicles are discoloured by leaching from the soil

Snow is blown into weird patterns 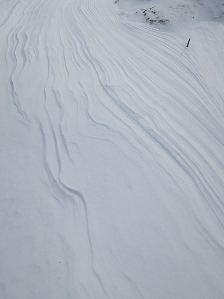 Some of the snow drifts have a beautiful symmetry 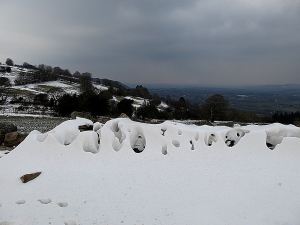 .. some are amazingly sculpted

The highest farm on the ridge: it must be very bleak living up here in winter

I saw no-one on the mountain. I saw very few footprints. Fabulous!