Whistler is very different from Banff in many respects.  It has a resident population of 10,500 compared with Banff’s 7,500 yet styles itself a village and nurtures that image.

Banff retains the character of a ‘frontier’ town, a place which has grown incrementally over many years whereas Whistler is very much a resort town, a newcomer to the block, in many ways a theme park built around skiing and boarding with money-spinning  add-ons.  It’s a party town, glitzy, buzzing with life until long after I’ve gone for my beauty sleep.

Unlike Banff the ski runs finish in the town centre, sometimes a bit slushy as the temperature can be above freezing at the base but still you can swish to a satisfying sliding halt and step out of skiis onto the square at the top of ‘The Stroll’, the pedestrianised street meandering down through the village, and do the ski-boot jerky shuffle the few paces to one of the many bars.

Most of the bars and restaurants lining The Stroll and in the small squares off it have large outdoor seating areas which, no matter what the weather, are thronged with people straight off the slopes.  It can be difficult to get a table.  Having hovered until a table comes free you can then sit in your ski gear, accumulating snow as it drifts silently down and waiting for the waiter to notice you.  Mere tourists may be more smartly attired but are not dressed for these exigencies even despite the patio heaters scattered liberally around, hissing and steaming as the snow lands on them and instantly evaporates.

Though the outdoor seating therefore remains the preserve of the hardy skier and boarder, skis and boards not being allowed among the tables and so are propped up around the edge like an ever changing, multicoloured fence.

Even when the snow turns to rain, as it can, it really is rather pleasant at the end of a hard day’s vigorous exercise and some seem to sit there for hours.  Many are not-so-young Canadians, skiing all their lives and enjoying a relaxing pint in the twilight at the end of the day.  Youngsters drink weird fluorescent concoctions and swap tales of epic adventure and near misses:  “I nearly died, man.  I came over this, like, great jump, did a 360 (degree turn), got massive air (was a couple of feet off the ground) and landed straight into this tree-well (the hollow which forms around trees in heavy and blown snow).  Like I was buried upside down and couldn’t get out.  Man it was epic.”   Very strange sounding to the characteristic understatement of mountaineering:“Interesting trip.  Great fun.”

The higher temperatures in Whistler are more conducive to this outdoor café culture, reminiscent of Paris in the Springtime or Greece in the summer.  There is no sitting outside for après ski in Banff at nearly twice the elevation and continental climate, it’s generally much too cold and frostbite and frozen beer are real possibilities.

Later in the evening The Stroll becomes a brightly lit, hedonistic magnet. Winter-bare trees are wrapped in thousands of lights, First Nation street-art is spot-lit,  buildings are adorned with ‘look at me’ illuminations.  It is very enticing, thronged with restaurant goers, meandering window-shoppers, frenetic buyers-of-presents for Auntie Maud and little Jimmy, the simply curious wandering around with cameras, as well as not a few who have still not made it back to their lodgings after a day on the slopes, clumping wearily and haphazardly along with skis over their shoulders.

At the bottom end of the Stroll, Olympic Square, legacy of the 2010 Winter Olympics,  offers free outdoor activities including ice skating, children’s adventure play area and a roaring fire to sit around and exchange yet more tales of epic doings.

I’m not a bright-lights guy but there is something endearing and mesmeric about Whistler which I’ll miss. 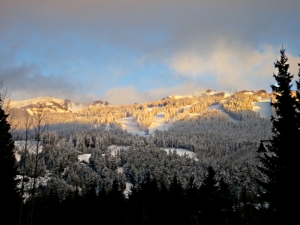 The top of Olympic Square and the Brew Pub clock tower

Strolling up towards Olympic Square 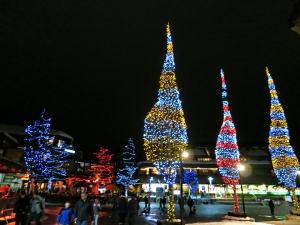 Some trees are wound up into weird shapes 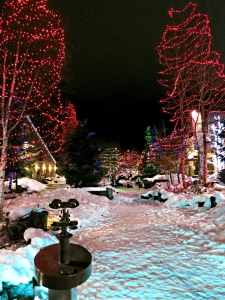 A bridge over a dry, snow-covered and illuminated creek has small sculptures of scientific endeavour along the handrails 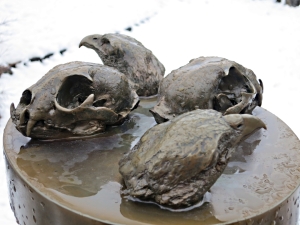 Detail of one of the sculptures

Among the delights on offer along The Stroll are great slabs of fudge, made over a metre long and carved into thick wedges

Now for the bright lights of Downtown Vancouver.

1 Response to Whistler in brief