On Sunday I had another day-off skiing, went to the morning service in the local Presbyterian Church of Canada, a building shared with the Korean Presbyterians, and then in the afternoon set out to walk the trail to Sundance Canyon.

The first part of the trail follows the Bow River to the Hot Springs.  The river is thickly frozen upstream of  Banff Bridge and there are not only winter paths across it but informal, semi-organised activities including an ice-skating oval which is cleared of snow by a snow-blower.

One of the footpaths across the river-ice 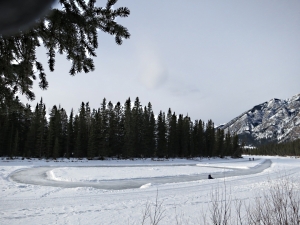 A skating oval cleared of snow on the river

At the point where the stream flows into the Bow River at the Hot Springs the ground alongside is not only clear of snow but there are water plants growing and a distinct whiff of sulphur.  Two years ago when I was here in considerably colder temperatures the trees and shrubs alongside the stream were thickly covered in hoar frost.

I follow the ‘Marsh Loop’ in the trail which keeps close to the river and part way along it come to a staging point for the  ‘Lake Louise’ to Banff’ cross country ski race with a guy directing ski traffic and proffering cups of hot drink.  The sign on the Trans Canada Highway just after Banff  says it is 55 kilometres to Lake Louise so they have clearly come a good distance and it shows in the tautness of the faces.  This was the point where the competitors are diverted off the trail and onto the river ice.

For some distance now I dodge out of the way as skiers come fast towards me, some poling with skinny skis flat in well marked grooves, others ‘skating’ from foot to foot much like speed skaters, rising to full height as they pole on each forward push using both leg and upper body strength.  Not all of them are super-fit youngsters, there are a significant number of older competitors who look seriously weather- and activity-toughened.  I envy them their toughness as I trudge slowly on.

A little further along is a small stony beach presumably kept clear of snow by another hot spring draining into the river.  I sit in the sun on a rock at the edge of the beach and eat my banana and nut bar and think back to doing the same thing on Greek beaches less than 4 months ago.  Then I swam in the Aegean, today I wandered the river-ice with the camera.

Continuing along the trail, broad at this stage because it is the old road from Banff, now dedicated for walking, cycling and skiing, I pass a picnic site with tables and a large covered building with long tables and benches inside to keep it free of snow and then a ‘washrooms’ as they are called over here.  Snow is piled up against the door but it opens easily and inside are very simple earth closets, dug deep to escape the frost, and equipped with seats and paper.  Amazing!

A little further and at yet more picnic tables the path to Sundance Canyon dives off to the left alongside a small stream which tumbles down the steep rocks under a covering of snow at the foot of towering crags.  Having crossed the wooden bridge over the stream I climb up the narrow path, obviously not the first to do so since it last snowed.  In places it is clogged with snow and shiny as others have slithered up and down but it presents no real problem.

What is a problem is taking photographs which adequately represent the dramatic pleasure of it, partly because the vertical height is too much to get into a single shot and partly because it is deep in shade  while the upper slopes are in bright sunlight.  The human brain can compensate for the difference and take it all in at one glance but I haven’t yet found a way of doing so adequately with a camera. 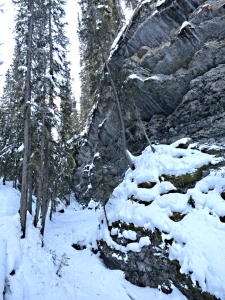 Climbing higher into the canyon the way forward gets narrower 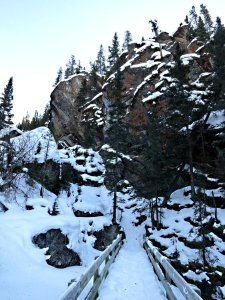 Approaching the steep drop on the way back down, sunlit cascade Mountain in the background 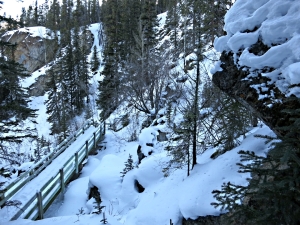 Looking down to the bridge over the waterfall

In places the stream is crossed by bridges over the snow-filled gully, waters roaring out of sight underneath.  I only become apprehensive when, after the steep climb, the path trodden by others went onto the snow over the stream.  I cannot but remember the time when as  young teenager walking in the Peak District in Derbyshire I fell through a crust of snow into the plunge-pool of a waterfall with a snow-roof 20 feet above and had to climb out using my rucksack as an ice-axe.  This time I was very cautious and escaped going through into the water which appeared from time to time through holes in the snow.

I follow the trail made by others, who by now were using snow-shoes judging by the tracks, up into the top of the canyon and then out onto the ridge at the side to reach a viewpoint through the trees.  This is where I decide that I should turn back.  The snow shoe tracks continued but I don’t know where they were going or what retrieval arrangements they might have made.  The altimeter on my watch told me I was at  just short of 5000 feet and I had reached a natural destination point.  I hate turning round in the middle of nowhere, I prefer to get to somewhere definitive, preferably a peak.  From the viewpoint the tracks went downhill and in the opposite direction to which I needed to go so turning round was an easy and natural decision, given that now it was past 15.00 and it was a 2 hour walk back to Banff.

I was hungry when I got back to town so went straight to Barpa Bills, a Greek take-away on Bear Street and had spanakopita (cheese and feta pie), Greek salad and tzatziki.  Delicious!  A very satisfying end to a very satisfying afternoon.

The snow-capped Cascade Mountain turning golden in the setting sun 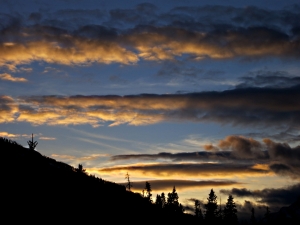 …. and even more gold in the clouds