On Friday night grey and gloom was forecast for Saturday morning clearing to sunshine in the afternoon.  So I planned a return visit to ‘Waterfall Country’ further west in the Brecon Beacons National Park.  Despite the forecast I opened the curtains to mostly blue sky with yet another sliver of red between the bank of cloud and the ridge-top.  Optimistically I chose to ignore the old saying about shepherds and red sky in the morning and headed west on the Heads of the Valleys Road.  It clouded over.

But I stuck to my guns, parked the car, at the information centre in Pontneddfechan (Bridge over the River Nedd Fechan) and set out to walk up the eponymous river to a series of waterfalls marked on the map.

Unlike the path to Sgwd yr Eira with its wall-to-wall mud the Elidir Trail has been much improved and is well maintained with steps and metal duck-boards at key points.  Boots are still needed but on the path itself the mud is superficial.  Of course it’s a rule of photography that the best shots are to be had by going off-piste, climbing crags or, as today, squelching through deep mud and skating over expanses of slimy rock pavement.  It was great fun and as a bonus by mid afternoon the cloud cleared and the sun came out.

The coincidence of a good path, a weekend and a sunny afternoon meant that there were a good number of people on the path: taking all shapes and sizes of dogs for a walk, taking children for a walk, or like me, taking a camera for a walk.  In towns and cities no-one looks at strangers let alone greets them, with the exception of Crocodile Dundee in New York, but in the mountains it’s a universally accepted courtesy to say hello and maybe exchange a few pleasantries.  Ignoring someone is rudeness.  So it was on the Elidir Trail today.  In places only a single person width, given the fact that it skirts the edge of a precipitous drop into the river, people would wait for each other to pass, call dogs and children to heel, simply act in a thoroughly considerate and pleasant manner.  A group of girls anxiously enquired after my well being when they saw me slithering about on the smooth rock platform at the foot of one falls.

On the way home I noticed that the setting sun behind me had set the sky on fire so I drove to the top of the ridge behind the house for a better view.

I reckon I’ll believe the old saying about shepherds and red sky night.  Should be another good day tomorrow.

View from the early morning balcony: blue sky and a sliver of red 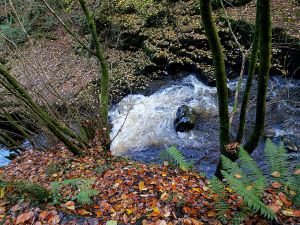 steep drop down to the river

One of the side streams tumbling into the river below

The sun lights up the mossy trees and rocks 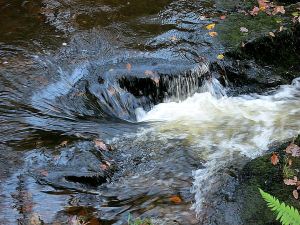 Detail of one of the minor rapids 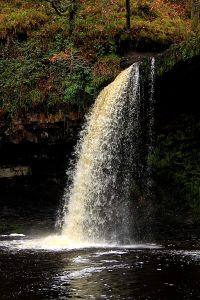 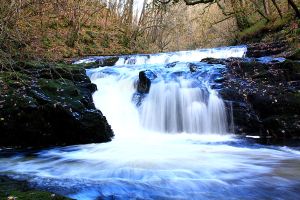 Trees washed down in flood

View from the ridge-top, red sky at night