November Daily Blog 4: back to gloomy grey and the problems of weather forecasting.

The weather in Britain is highly unpredictable.  Low pressure systems coming in from the Atlantic at some point run up against the high pressure systems over Europe and where and how they do is subject to a whole host of macro-variables which, despite vast amounts of monitoring and research we still know relatively little about.

Because the weather is unpredictable the weather forecasts are notoriously unreliable, except during the odd couple of weeks in the year when high pressure moves west, settles over the UK, and Met Office forecasters heave a collective sigh of relief.  A great deal more data is now routinely collected to assist with forecasting,  prediction models have become increasingly sophisticated, and the Met Office has been give one of the most powerful computers in the world to play with.  Yet the man-going-out-into the street still doesn’t know whether to take an umbrella.  This uncertainty induces a kind of paranoia, as evidenced by the number of blokes carrying brollies and women surreptitiously hiding telescopic versions in their handbags even when the sun is beating down from a cloudless sky during a high pressure ‘event’.

The result is that it is difficult to plan ahead for any activity outdoors.  As I spend as much time as possible outdoors that is a problem.

Forecasts are improving and the new format includes a ‘% precipitation probability’ so I now know if there is a 20% or 80% probability of being precipitated upon.

So what is the way to deal with this uncertainty in practical terms?  For short term activities locally, decisions can be made at the last minute if the sun is shining or, failing that, if it’s grey but dry.  On Saturday I dashed up to the American Gardens in the morning because, despite the forecast, the sun was shining. In the afternoon it rained heavily despite a forecast of grey but dry.  Sunday it was grey and wet all day. So when I got home from church I spent the rest of the day doing indoor chores and writing.  Now that I’m not tied to working hours I have the freedom to be flexible like that but it’s far more difficult for those with regular working hours.

And it’s far more difficult for activities which depend on dry weather and dashing back to base when the clouds leak isn’t an option.  Committing to a long distance walk requires a rucksack full of optional clothing. Rock climbing may just get knocked on the head as the crag channels water downwards.  Paragliding means sitting on the hilltop if the wind is too strong and you don’t bother going out if it’s raining.  Conversely, white water canoeing may prove impracticable if expected rainfall in river headwaters doesn’t materialise.

I suspect that the Met Office sets targets for its forecasters.  Maybe successful target achievement is rewarded by Performance Related Pay: get the forecast right for 5 out of the next 8 three-hour slots on a regular enough basis (just to make sure that it isn’t occurring by chance) and receive an annual bonus.  It would be interesting to know how many forecasters would apply for the job if that was the sole basis of their income. I know I wouldn’t apply.

However, the new style forecasts also include UV index and it is comforting to note that at night the UV index is forecast to be Zero.  Now that’s a forecast target I could achieve with 100% success.

The forecast for tomorrow, 5 November, is looking good all day and with a low UV in the evening it should be good for the Guy Fawkes celebrations. 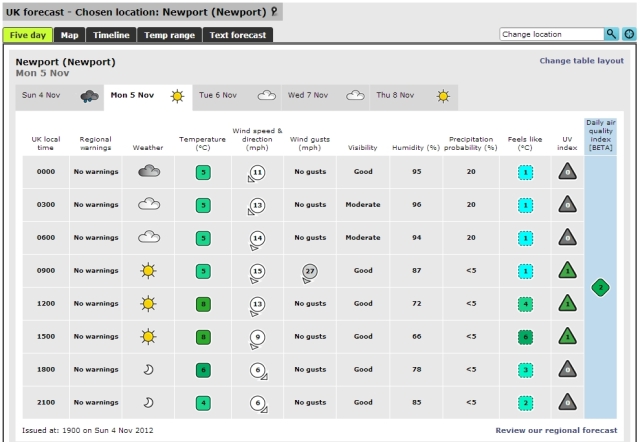