November Daily Blog: towards a philosophy of enjoyment.

With the challenge to find something worth blogging about every day it was disconcerting to see Friday begin very grey, very wet and with a mountain of clearing up after having friends over for a meal on Thursday evening.  I’m an outdoor guy and prefer to be outside at every opportunity.  Inclement weather and indoor chores don’t sit with well with that predilection.

Somewhat morosely sorting through the after-dinner detritus set me thinking about how time is allocated each day.  Whether we like it or not we do ‘allocate’ time even if we just sit on our thumbs and contemplate our navels (don’t try this at home, it sounds very uncomfortable).

I guess that, simplistically, stuff can be divided into the things we have to do, like clearing up after a meal or cleaning the loo, and things we want and choose to do, like summiting a mountain or spiralling to the top of a thermal on a paraglider.  But there’s a whole lot of stuff between these lows and highs, and a lot of stuff which is in a grey area in the middle.   And in any case it’s not as simple as that bald distinction.  (lots of mixed metaphors in there)

Unless we are independently wealthy and can pay others to clean the loo and all the other chores then such things are inevitably going to take up some of our time. But how much?  It seems that there are always more chores than time to do them, particularly if you are a one-person household.  With varying degrees of conscious decision-making we decide at what point we will call a halt to the drudgery and instead choose to do something that we want to do.   I like the British Mountaineering Council’s poster to promote female interest in rock-climbing with a photo of a young lass clinging by her fingertips to a rockface with the caption: ”Sod the ironing!”

We each strike a balance with which we are comfortable but in doing that there are trade-offs.  We have to decide how many un-ironed clothes we are prepared to put up with and we have to square it with our conscience.  “How much time can I devote to pleasing myself and how much should I consider the needs of family/friends/the local and global community”.  Putting it bluntly we each strike a balance between altruism and hedonism. We might never overtly face that consideration but we all draw the balance somewhere.

As an aside, I think it’s important not to lose sight of the fact that it has not always been so and is still not so in less affluent societies.  With the exception of the wealthy minority, leisure, the freedom to do what we choose to do rather than simply doing what is necessary to keep bread on the table and a roof over our heads, is a very modern option and confined to ‘Western’ cultures.  Sadly, in the West the pendulum is increasingly swinging towards hedonism with open espousal of selfishness as the ‘right’ motive.

The second issue is that, for the majority, work is no more than a means of earning a crust and to be able to do other things in leisure time.  If work is tedious and unsatisfying how about changing careers and earning money doing an enjoyable activities?   The problem is that the activity then changes from something which we choose to do to something which we have to do as an obligation, a commitment.  It changes the whole dynamic.  It becomes a chore.

I also venture the suggestion that the things which we choose to do are the more enjoyable by virtue of the contrast with the tedium of daily living and the work/chores we have to do.  That climbing weekend can be savoured all the more if we anticipate it through the week.

So what did I do on Friday?  I finished clearing up by which time it had stopped raining, the sun had come out, and I took my chain saw for a ride in the car.  Friends in Cardiff had stumps of trees in their garden which were a bit too big to tackle with a bow saw so I offered to take them out.  I enjoy felling and lopping trees and even though these were garden not woodland trees it was good fun.  It was all the more pleasing to do it because these were the friends who identified the Biarum marmarisense which we saw on Symi.  One good turn deserves another.

Postscript: While photographing the flowers I found a corm which had been dug out of the ground by feral goats in search of roots to eat.  I brought it home and planted it in a pot on the kitchen window sill.  It has now flowered.  It’s smaller than the ones in the wild but still a minor triumph. 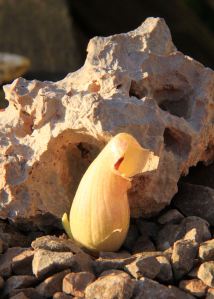