From Nisyros to Symi via Kos

Moving on.  There nolonger seems to be a ferry connexion directly between Nisyros and Symi.  Early morning ferry to Kos and high speed catamaran from Kos to Symi at the end of the afternoon was the best option.

Early breakfast in the hotel and then down to the harbour for an 07.30 departure with the sun just coming up over the headland.  It was very windy on the crossing with spray going right over the boat as it ploughed into larger waves.  Passengers all sat inside.  The crew got wet.

Sun coming over the headland

Each island has its own character.  Although Nisyros and Kos are very close together they are like chalk and cheese.  Nisyros, laid back and relaxed, few boats in and out of the tiny harbour, a ‘locals’ island as it doesn’t depend on tourists because of the income from pumice quarrying.  Kos, bustling, boats in and out of the harbour constantly, harbourside thronged with tourists.   Bike hire (the pedal kind) is big on Kos and the bikes hired are …. big.  The handlebars all seem to be about 4 feet off the ground, very sit-up-and-beg style of cycling.

The good thing about Kos is the archaeological sites.  There are many and some of the larger ones are open to the public completely free of charge.  You just wander into them and around them like a public park.  There are columns and arches and mosaic floors and remnants of domestic buildings and remnants of massive carved masonry lying on the ground everywhere.  In Athens you would pay for this.

My ferry was at 16.20 so I split my time between wandering around the archaeological sites with the camera and drinking coffee in the very laid back taverna at the KTEL bus terminus, this year with added WiFi.  Hanging around the bus terminus reminded me of all the KTEL bus termini I hung around earlier in the summer on my Grand Tour of western Greece: Athens, Kalabaka, Ioannina, Igoumenitsa, Kerkyra, Patras, Kalamata, Areopoli …….

Probably mu favourite image on Kos, carving on one of the marbles lying around

another site, another frame 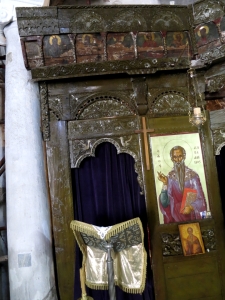 The ferry came and left dead on time.  Dodecanese Seaways are brilliant at keeping to time.

The ferry arrived in the iconic harbour on Symi with its small outer deck packed with people ooohing and aaahing, cameras clicking away.  I spent 3 months on Symi in 2010 and ferried in and out of the harbour a number of times.  The impact never palls, it really does make you catch your breath, but it doesn’t make me grab the camera any more.  I know there are many better viewpoints of this dramatic harbour than the deck of a catamaran.  I sit there smugly knowing the ropes until it was time to go down to the lower deck, grab my Big Bag from the pallet at the side where it’s been stowed by the crew and then position myself to be first off and along the microscopically narrow harbour side.

Arriving on Symi isn’t like ‘coming home’ but it’s a very comfortable feeling.  Everything is familiar, I know the alleys and the steps of the Kali Strata (some say 360 but I haven’t counted) up to the Horio and the hotel where I’m staying.  People I know offer greetings as I walk past: “Welcome back. Nice to see you again. Catch you later.”   Hands shaken.  Greek hugs.

It’s good to be back.  And good to know that in a couple of days I’ll be joined by my daughter and her husband and some friends.

This entry was posted in Greece and tagged Greece, Kos, Symi. Bookmark the permalink.