Tuesday was a blast!

One of the things I wanted to do before I leave Nisyros was to revisit the Parleta lava pinnacles towering above the caldera with the ancient fortress built into them.  I went there first time last year and again this when the island bus was still running to Nikia at sensible (for me) times.  It really is a special place, among the many special places on the island.

Last year I walked there from the crater to which I was delivered by the ‘volcano trip bus’.  This year I walked from Nikia on the crater rim.  Tuesday and I decided to walk the entire route from and back to the hotel in Mandraki.  A long way.

That’s why it was a blast.  I had to set off earlier than usual and focus on the walking rather than on exploring and photography.  It was important, after all, to get back in good time for a swim and to dry off in the late afternoon sun.

The path up to Nikia was ‘new’ in that I haven’t walked it in that direction before, always from Nikia previously.  It’s probably one of the most dramatic paths on Nisyros, running around the inside of the caldera with views straight down into the crater with the hordes of trippers barely visible so far below.  It is well used and reasonably well maintained with significant sections of it stone paved.

The impression was very different going in the other direction, so much so that at one point I took a wrong turn.  Nothing serious, just to emphasise the point that walking the other way, certainly in the mountains, is a very different perception and experience.  En route I stopped off briefly at Stavros monastery to catch the place in the morning light.  I was moving well and making good time, reaching Stavros in less than 90 minutes and Nikia in not much more than half an hour after that.  Time for a frappé. 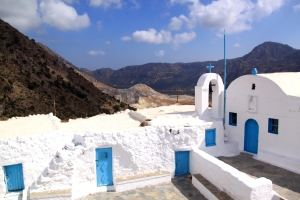 Stavros monastery with a volcanic dome and crater below

The next section of the route to Parleta was in reasonable condition, though it necessitated climbing up onto the terrace above for a few hundred metres where it is blocked by holly oak scrub.

I reached the Partleta pinnacles in less than 2½ hours after starting off so indulged myself and climbed up them to have my snack in the magnificent eyrie at the top.  The pinnacles drop down vertically to the caldera floor about 1000 feet below and the views are amazing. 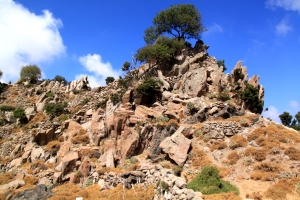 The approach to the Parleta pinnacles: straight up the crag

Looking towards the crater 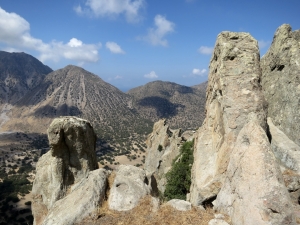 Some of the pinnacles

I spent longer than I should have done there given that I still had a long way to go so I reluctantly and wistfully climbed back down and set off on the next leg of the walk.  That was when things unravelled slightly.  Very shortly after leaving Parleta the path crosses unstable scree of very fine material littered with rocks of all sizes and bits dead tree.  The path disappears here with a faintly discernible ‘better line’ across it.  I was still thinking about how great Parleta is and not concentrating so I got the line wrong and found myself grovelling on all fours to avoid going cascading down the mountain.

No significant injuries or blood–letting, just severe irritation at not paying attention and getting it wrong.  As soon as you start to think that you’re the kiddie, you’re on top, things are good ….. that’s when you lose focus and things go wrong.  How many times that’s happened to me, particularly canoeing when if I capsize it’s always after getting down the rapids or the weir/waterfall, and I still fall into the same trap.  On terrain like this you can’t relax until the end.

I carried on from there to Emborios, going off exploring some caves at one point, before yet another frappé in the Balcony Taverna. 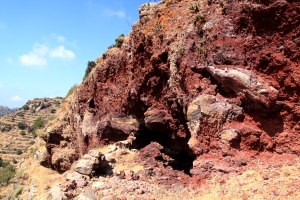 A line of very red caves 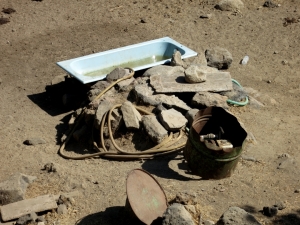 A common sight on farms in the UK but very, VERY unusual in Greece …. a bath used to water animals

That was a minor incident on the way.  Overall it was a great day.  A blast.  And back to Mandraki in time for a late swim to wash off the dust. 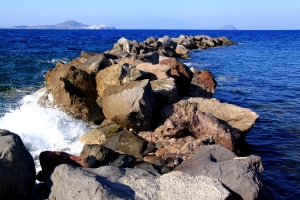 The breakwater behind which swimming is possible in rough seas