The island bus service is now useless for visitors wanting to use it to go out walking.  As I’ve said before 07.00 is too early and 14.15 is too late.  No other choice.  However, a conversation with some people over breakfast on the hotel terrace on Monday led to a shared taxi up to Nikia at 10.00 on Tuesday.  The cost was 4 times what it would have been on the bus but at least it got me to the starting point at a good time. That in turn meant that I could have a go at a challenge I had all but given up on, a walk which from Mandraki would have meant a very long day but starting from Nikia was feasible.

The plan was to drop down on a reasonably kalderimi from Nikia to the now-deserted settlement at Avlaki and find a route from there to the long-deserted sulphur processing plant at Agia Irini before heading into the Argos area and up to the track from the Stavros monastery back to Mandraki.  The majority of the walk was very definitely very ‘off-piste’ with no path just steep and overgrown agricultural terraces and craggy volcanic rock outcrops dropping steeply down into the sea.

We had walked from Agia Irini to Avlaki a few years ago and found it very demanding.  But I was confident that I had enough of the walk in my head to recognise key features of it  in reverse.  Fat chance!  Either the topography has changed significantly or I was on a different planet.  There was nothing whatsoever which was familiar.  Nothing sparked a memory of it.

That wasn’t a problem.  I had a picture of the terrain in my mind and knew where I wanted to get to so it was a matter of interpreting the ground as I went and following goat tracks through aggressive vegetation and over rocky ground.  I have neither the agility and sure-footedness nor the mentality of a goat so the route I took, though it got me where I was going, lacked style and finesse.  Very disappointing.  Climbing competitions are marked not only on speed but on style.  Even as a low grade, and most certainly not a competition standard, rock climber I value style and finesse.

To be fair, I did meander around a good bit, not with the objective of making progress so much as to look at things and take photos.  It is a fascinating area of coast both geologically and historically and is very obviously rarely visited.  Even though it is one of the areas on Nisyros where hunting (shooting chukkas) is allowed the number of shotgun cartridges per kilometre of meandering through this area was very low.  Shooting is the only reason people would come here.  Clearly not many do.  It seemed an abandoned area.  A bit of the Nisyros coast where nobody comes.  Given up on by the farming community long ago.

It clearly had not always been so.  There was much evidence of settlement and terraced fields wherever the terrain would allow.  Most of the steeper terraces were almost completely blocked by thorn scrub with stone built houses here and there.  Having rounded one rocky headland I dropped down to a small area of less-overgrown and wider terraces which seemed to be devoid of settlement but turned out to have caves dug out of the pumice with stone-built fronts, the terraced fields simply continuing over the top.

It had been very slow going up to this point and it was good to walk on more open ground for a short while.  Then there was a clamber up more steep terraces to reach a cluster of buildings higher up the slope and in an onward direction.  One of them had ‘1930’ carved into the arch over the door which was of a more sophisticate design that the straight stone slab lintels elsewhere.  I find it amazing that people were still building these one-room houses well into the 20th Century.

It was a tiring walk because most of it was across very rough ground but I got back to Mandraki unscathed and very ready for a beer.  It is not easy country to trek through but I saw enough to whet my appetite to find out and explore it more.  And I was irritated enough to be determined to find a more satisfying route through it, one with more style.

Looking down on Avlaki 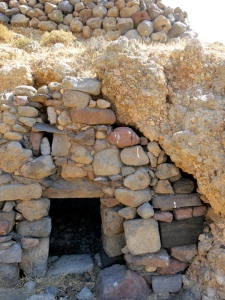 Stone built front over a cave 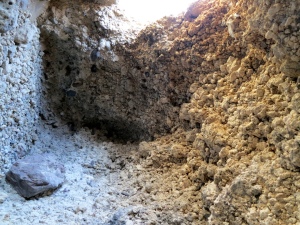 …. and on the inside 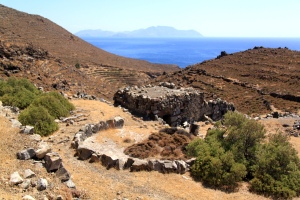 Looking down to the sulphur processing plant at Agia Irini 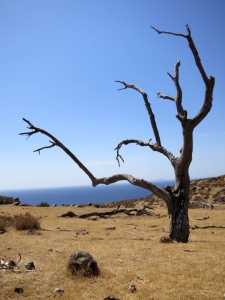 Many dead trees on the terraces 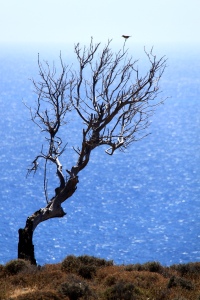 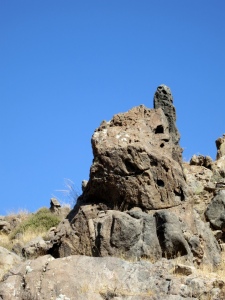 This entry was posted in Greece and tagged Avlaki, Greece, Mandraki, Nikia, Nisyros. Bookmark the permalink.