Kardamili: more time perception …. and a problem with drugs

Inspired by Monday’s 25 km walk into the mountains and not unduly tired after it, I set out with an even more ambitious plan on Tuesday.  Hack back up to Saidona, the village at 600 metres and then take to the tarmac to get to a footpath higher up into the mountains.

In line with yesterday’s rambling about time perception, there was so much new and interesting stuff that the day seemed to go on for ever.  I was convinced I had covered a lot more ground than on Monday but my pedometer put me straight.  I had in fact only walked 1 km further, 26 kms not 25.  My watch also confirmed that I arrived back only an hour later, the additional time taken up with mooching about and taking even more photos.  The reason it seemed a longer day was clearly that there was even more new and interesting stuff to look at.

Not all of the photos were successful.  Sadly, the eagle I watched had seen me before I saw him and had thermalled up to a height at which I couldn’t hold him in focus long enough to get more than a blurred shot when cropped.  But I enjoyed watching him circle lazily getting higher and higher.  Always nostalgic. 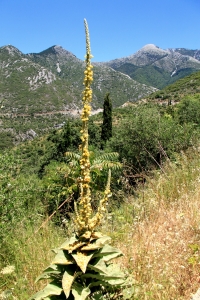 Plants are easier to focus on then eagles

Also sadly, I have now been here long enough to start getting RPS – Repetitive Photo Syndrome.  I see something amazing and photograph it from multiple angles.  I see it again a couple of days later and do the same thing, confident that I can improve on the shot.  When I get back to the hotel and download to the computer there is rarely a discernible difference in quality,  I had simply repeated the same framing and composition of earlier shots with the light quality the same.

One of those sulphur yellow butterflies again

I generally have the knack of seeing the right place to take the photo and the right amount of zoom to compose the shot so have done the business within a couple of minutes.  I climb crags, teeter on the edge of tiny footholds, wade through aggressive vegetation, all in search of The Perfect Photo.  But usually find what I already have in the can (to use an old film-making metaphor, or so I’m told … in films) is as a good as I am capable of.

But today, apart from the RPS, there was a lot which was new.  The scale of the landscape is just so large that it can’t be captured with a camera but it is fantastic to walk through it.  A few times I stumbled because I was looking around rather than at my feet.  No injuries, thankfully.

I reached Saidona in less than 2 hours, with which I was well pleased.  Then followed the road to reach a footpath up to the monastery of Viadenitsa.  It’s not fun trundling along tarmac but it was the only way ….. and it was well worth it.

The monastery was in a great location, very photogenic, but not shown on the map is a Mani tower immediately behind the church and from there a footpath carrying on up the mountain.  I followed the footpath up to an altitude of 800 metres before I reckoned that I really should head back in view of the passing time and the fact that I was getting further from Kardamili not closer to it.

Mooched around the tower for a good while.  It has been partly restored with a roof and newly made floors on two levels.  Someone had been living there at some point but not for a while.  The new door was open but lockable.  The only inhabitants now were more horseshoe bats. A place like that breathes history.  And is covered in droppings.

The Mani Tower with the church of Viadenitsa below

From inside the upper storey of the tower 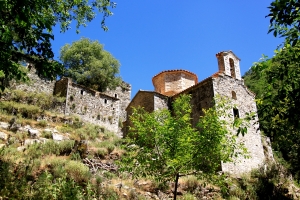 The church was also open with a very old wooden door behind a metal counterpart. Inside was very simple and plain compared with many churches of similar size.  That’s maybe why it was open.

The door of the church

Carried on very mindful of the time and the distance to cover but progress again thwarted by the ruined tower of Kitriniaris at the side of the road which I had just had to go and explore.  I was confirmed in my view that only by walking can you really experience a place when a hire car pulled up as I was scrambling over the rocks on the way down from the tower.  The young couple in the car took a look and moved off again within 20 seconds.  They clearly didn’t stop to take a look at Viadenitsa either as within a minute the car had appeared on the road towards Saidona.  I bet I got more out of my day than they did.  Chock full of new stuff. 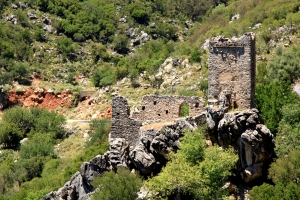 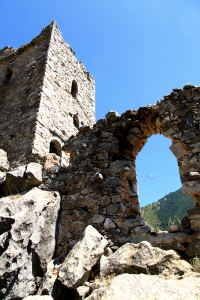 … and inside. The roof and floors may have gone but note the number of built-in cupboards.

PICSThat problem with drugs?  It’s all down to grapefruit juice.  Two things you should know about grapefruit juice.  First it’s my favourite juice of all time.  I could make myself ill on it just because if I don’t discipline myself I can drink a 1 litre carton in  a minute and move on to the next one, converting my personal sewage disposal system into an explosive device.  Dramatically.  Second, it inhibits the body’s ability to absorb drugs into the bloodstream.

I discovered this when I was skiing in Canada in temperatures between minus 15 and minus 30.  I suffer from Reynaud’s Phenomenon which means that because of poor circulation my fingers become very painful in the cold.  ‘White Finger Syndrome’ it’s often called.  A friend recommended Nifedapine as a help so I read up about side-effects on the internet.  One thing which it stressed , and both my doctor and pharmacist subsequently confirmed, was not to take it after drinking grapefruit juice.  I read up about that and it seems that grapefruit juice seriously inhibits the body’s ability to process drugs of all kinds.  The drug is then released into the body in one big slug which creates an overdose.

What does all this have to do with rambling around the Mani peninsula in the Peloponnese?  When I used to play squash 6/7 times a week I took Siberian Ginseng to speed up the recovery time between games.  Since then I have taken it when I am exercising hard and frequently.  Like now in Greece.  Unfortunately I saw a new delivery of grapefruit juice in the supermarket and, without thinking of the consequences,  loaded up with it in the fridge.  But I don’t fancy a big hit of side effects from Ginseng which can include palpitations so I’ve stopped taking it which means my recovery time after 3 days hard walking is going to be longer.  Similarly, my drug of choice is caffeine and I get a fix of double espressos two or three  times a day.  Not at the moment!  I highly recommend all three, grapefruit juice, Ginseng and espresso ……………. but not in combination.

Let’s see what that does for time perception.

This entry was posted in Greece and tagged flora and fauna, Greece, Kardamili, Mani, monasteries, Taygetos Mountains. Bookmark the permalink.