I followed the Biblical principle and shook the dust off my sandals as I left Patras at 08.30 Monday morning on the KTEL bus for Kalamata.  I had decided long before I had my camera pinched that this was not a town for me.

Three hours of fairly monotonous, but very non-UK, landscape until the Taigetos Mountains appeared about an hour before the end of the journey.  Arrived Kalamata KTEL bus station on time but only to find that it was not where the description on the internet led me to believe.  Instead of a short walk to the hotel I had sussed out, it was about  1km away ‘kato, kato! (down, down!).   …..  so I was told by a local guy.   The internet placed the hotel very close to the railway station on ‘Sidirimiko Stathmos (Railway Station) Street’.   Shame that the railway isn’t operating and is unlikely to do so in my lifetime. The bus station wasn’t shown on the map.  The hotel itself was about 1km from the sea.  I was not a little dischuffed. Time for rapid rethink.

I instantly resorted to my favoured work principle:: ‘All problems have solutions,  You just have to think laterally and find them.”  .  My solution?  I had only intended staying overnight in Kalamata en route to Kardamili in the North of the Mani.  I knocked that plan on the head, enquired in the KTEL office, and found that the next bus to Kardamili left in 30 minutes.  No brainer!!  Time for a spinach pie and frappé in the very good, if a touch expensive, bus station café and I was on my way again for the 1 hour journey to Kardamili.

Rarely has a flash decision turned out so right!!!!!  Kardamili is just my kind of place (though I don’t fit in with the upper middle class English contingent around (see http://www.zorbas.de/maniguide/kardamili.html#dont under the heading ‘a certain type of English tourist).  It’s village-sized, not a large town.  Very good walking in the mountains on the doorstep.  By the sea.  Perfect blue-sky weather.

I would have frittered away a day of my life in Kalamata.  Not that I’m dissing the place but I would have been looking for things to kill the time as I had been in Patras.  As it is I’m where I planned to be from the outset.  Which brings me to the ‘full circle’ bit.

I was given the idea of coming to the Mani, the central and most southerly of the 3 Peloponnese peninsulas, by a book given to me for Christmas and titled ‘The Mani’ written by Patrick Leigh Fermor, a WW2 hero (he captured a German General on Crete and exported him to Britain) and author.  See http://en.wikipedia.org/wiki/Patrick_Leigh_Fermor

I didn’t get on with the book because, though my grasp of English is pretty good, there are on average 10 words per page which I have never seen before.  But I persevered and the story of the area which unfolds is fascinating.  It struck me as my kind of place.  So I built the whole trip around that one goal of coming here.  Kardamili is the beginning of the Mani.  I’ve come full circle from the original inspiration.  In the fullness of time I plan to head further south into the Deep Mani.

I arrived in Kardamili on the bus at just gone 14.00.  Fed up with lugging Big Bag around Big Towns looking for hotels or bus terminuses, I saw a ‘domatia’ (rooms to let) sign at the edge of the main square about 20 yards from where I got off the bus and enquired within.  It’s good here.  Very good!  Reasonably priced though not cheap. Not a hotel but an apartment so I can do my own food as I choose.  Sea view.  Sun on the balcony afternoon, evening and sunset. In-room WiFi.  Couldn’t be more central.  Draught beer 20 metres away in the main square €2.60 … that’s draught beer.  Remember the 330 cl bottle in Petras @ €5?!

There is the beginnings of a gorge within 200 metres of the other side of the main square …. I love gorge walks …. and next to it are 2 very well stocked supermarkets.  After a preliminary amble up the gorge at the end of the afternoon I stocked-up in the supermarkets for breakfasts and banana/nutbar midday meals. There is a walking and climbing shop within 50 metres which stocks good quality gear and 1:25,000 scale walking maps of the area.  There are way-marked walks up into the mountains.  I repeat:  it’s good here.

I deliberately ate tonight in Lela’s Taverna.   Good food and service but pricey.  However, I had to eat there first night because the eponymous Lela used to be housekeeper for Patrick Lee Fermor when he lived here.  The location of the taverna is unbeatable, on small terraces above rocks looking down onto the sea with views of the setting sun and, in the opposite direction, the rising moon.  Magical.  Shame I was on my own.  The staff were all young, energetic and multilingual Greeks.  There was a tiny, wizened old lady sitting at the side as I left.  I said ‘Kali Nichta’ and raised my hand in local greeting to Lela. Full circle.

Just a few photos to give an impression of Kardamili. 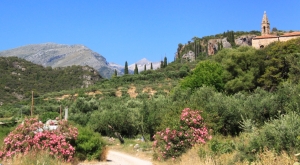 The track leading into the Viros Gorge with the church of Agios Spyridon up on the right.   Profitis Ilias, the highest Mountain in the Taigetos range in the background …. still with snow on it. 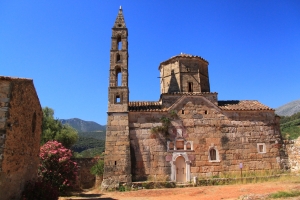 Agios Spyridon, the family church of the Moutzinos clan which ruled Kardamili 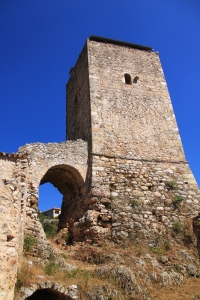 in Old Kardamili, the Tower home of the Moutzinos. One of the famous Mani towers. 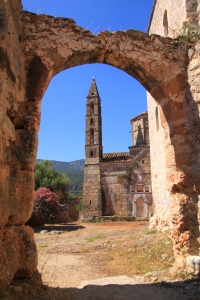 Inside the Old Village 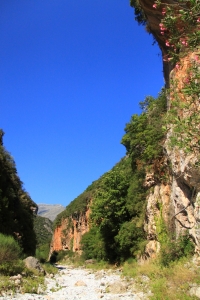 The beginning of the Vykos Gorge