Corfu: the exotic, the gnarly and the past it

I was a tad disappointed when I got up on Tuesday.  It was dry but grey and overcast.  I thought to myself, indeed I groaned to myself, “Oh no!  Not again!!!”

But when I sat down on the covered terrace for breakfast blue sky could be seen approaching from the North.  Breakfast was very good indeed, not least because there was fresh wholemeal bread.  And this was good quality stuff not the over-priced bricks the bakeries produce on some islands as punishment or penance for those Brits with weird taste in foods.

By the time I finished my extra serving of wholemeal ….. it really was very good ….. the sky had cleared and the morning sun was very pleasant indeed.  So I sauntered along the lightly trafficked coast road to a taverna which looked like it might have WiFi, enquired and it had.  I sat on the edge of the sea, sipped an espresso, checked e-mails, posted a blog and just luxuriated in the sunshine and the view.  I think it’s the best place I have ever accessed the internet.  What a place to have a WiFix. 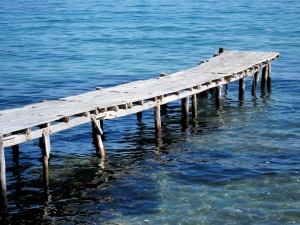 The wooden ‘jetty’ which I sat alongside at the WiFix taverna. Amazingly picturesque and laid back place.

WiFix finished I sauntered back to find our friend Elisabeth and we set out to do a circular walk from the hotel, severely hampered by the inadequacy of the maps we had but determined to make the best of what we did have.

The walk was less than strenuous but surprisingly interesting for a generally low-level part of the island.

We went inland first, hoping to find footpaths to take us to the low ridge down the spine of the south of Corfu.  Elisabeth had a very different approach to me.  In the absence of information on the map she simply asked local people, mostly elderly blokes working on market garden/allotment plots, where were the ‘monopati’ (footpaths) to Argirades.  Two things of interest emerged from this novel approach.  First was the fact that of the people she asked very few could speak any English but most had a reasonable grasp of German.  This is quite unusual in my experience of the Greek islands and I guess reflects a different modern history. The second was the view voiced by one guy, who added by way of explanation of the fact that he could not provide the information we sought, that monopati’ are only for animals.  That chimes with the view expressed by the Greek author of ‘The Footpaths of Meteora’  that Greeks have no concept of walking for pleasure.  When roads were built in rural areas and the internal combustion engine became generally available people stopped walking anywhere and instead zoomed around in dilapidated cars, pick-ups and scooters.

In view of the lack of footpaths we kept to minor roads and meandered back to the coast road which we followed.

The landscape was much more varied that on Paxos, only 8 miles to the south but one thing the two areas did have in common was old olive groves, some of them very ancient and gnarly.  As around Parga and on Paxos the olive groves were productive rather than abandoned, with netting rolled up and ready to deploy at the right time. But some things were abandoned including many old houses which had obviously been replaced by newer ones to modern standards.

Many of the olive trees are obviously quite ‘mature’

Some are beyond gnarly, positively ancient 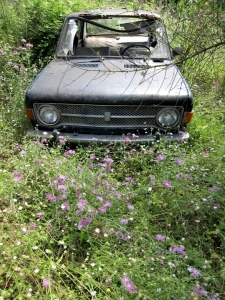 So are some of the cars, this one abandoned to the wild flowers

As are many small boats, this one left lying on it’s keel still in the shallows

We passed quite a number of restaurants and tavernas most of which had no customers at all and an air of forlorn, gloomy emptiness.  This may be early in the season when visitor numbers are bound to be below what they are in July/August but I couldn’t help thinking that with all the negative publicity on TV and in the papers that this could very well be an extremely tough Summer for small establishments in Greece.

But we eventually we came to a restaurant which was buzzing. It had an amazing garden going down to a tiny beach provided with sun beds for which there was no charge.  We sat on the edge of the terrace at the top looking down over the garden and the sea.  An amazing oasis of colour and life. 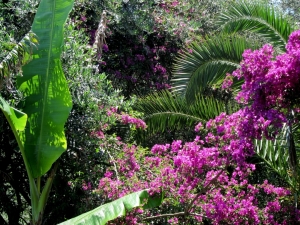 … and turning round to look down the garden, including statue and the stuesque 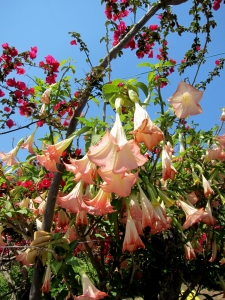 I used to have one of these in a pot! 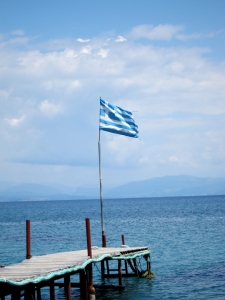 After a very refreshing freshly squeezed lemon juice it was time to take to the water.  A short scramble down the rocks from a sunbed perched on a narrow strip of shingle and my fist swim of 2012.  I can’t say that the water was warm, it wasn’t , but it was by no means as cold as I expected it to be this early in the summer. I think this is probably because the sea around this bit of coast is very shallow and because it is in a large bay there is not the mixing action with colder water in winter storms.  I was also very pleased that I was not as unfit as I thought I would be, maybe because of the heavy duty reconstruction I had been doing in the garden before I left.  I remember my first couple of swims last year when I was very tired coming out of the water.  Today I hopped back up the rocks to the sunbed and basked in the sun like a be-whiskered walrus (I really must  trim my beard!!) until I dried off.

Then a very relaxed amble further along the coast to another of the tiny fishing harbours before turning round and ambling back to the hotel.

Tranquil coast in the evening sun

Another of the tiny fishing harbours, this one at Petriti

The whole atmosphere of this bit of coast is laid back and bucolic, these birds just wandering around the unfenced olive grove

This entry was posted in Greece and tagged Corfu, Greece, olives. Bookmark the permalink.