The weather forecasts for Meteora on Tuesday had all agreed that it would be grey and wet.  Local opinion also agreed.  As if to thumb the nose at the experts, it wasn’t.  It started off bright and then clouded over and then cleared and then clouded over.  All in the space of 3 hours.  But no hint of rain and from about 12.00 onwards it became increasingly warm and sunny.

I had decided to walk to a monastery furthest from Kastraki where I’m staying using a path the start of which I had sussed out on Monday.  It turned out to be a very good path and a very good walk.  I fair zipped along.

The first is that I can’t always tie in the footpath guide with what’s on the ground.  This might be that it was written some years ago and a combination of vegetation growth and road improvements have rendered it unhelpful on some paths.  Vegetation growth is a major issue because some parts of paths are through dense scrub/tree cover which grows across and blocks paths.  There is little evidence of maintenance work. On the other hand the first path I walked on Tuesday  has been much improved and much of it is stone-paved.  The second path I walked isn’t even shown in the guide.  Road improvements, like on some of the islands I have walked, have simply severed paths which become impossible to find or access and so become unused and unusable.

The empty bars and restaurants in Kastraki in the evening are probably one consequence of this poorly developed and recorded footpath network.  If more, or even if anything, was done to develop and mark a proper footpath network it would probably encourage people to come and stay rather than shoot through in a coach for the day on a culture-fix.

The second ramble is that mass coach tourism in Meteora may ring the tills in the monasteries with Euros (or Drachmae in the not unimagined future) but is a pain in the bum for the lone connoisseur like me.  Case in point.  I dropped down to the Roussanau Monastery from the top road only to find that the bus load of Russians which had clogged up Agios Triadhos monastery had parked at the top so they could walk down, rather than use the official car park at the bottom and walk up.  They then completely blocked the steps down whilst their guide waxed eloquent, I assume with interesting titbits about the history of the monastery with what were obviously frequent funny asides judging by the laughter.  I gave up on trying to get past and sat down on the steps and ate my sandwich.  They then completely filled and therefore blocked the entire inside of the tiny ancient church bit of the monastery.  When they left they went down to the bottom car park to which the coach had moved.  Uphill walking must be beyond them.

The problem is that these guys arrive in double-decker buses with bars, loos, TVs and fridges (they say so on the side) and so are in vast numbers.  Cheap and efficient to move around the world but totally out of scale with diminutive ancient monasteries perched on the top of rock pinnacles.  Minibuses zoom around as well with small groups which seem far more in keeping with the scale.

By contrast I had passed a party of about 20 French people walking up the steep and sustained climb all the way from Kalabaka and their average age must have been 65+.  Respect!  Like me they recognised that the getting there is as important as arriving.

There were amazing views from the Agios Triados Monastery to which I walked first and then along the route to Roussanou where I went next.  The camera clicked incessantly as new perspectives opened up on the four monasteries I had walked to and photographed previously.

As with the others it fills its pinnacle-top perch 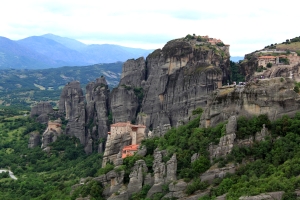 Four other monasteries in one shot: Grand Meteroa, Varlaam, Roussanou and Agios Nikolaos 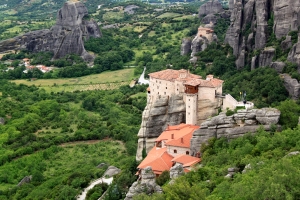 From another perspective, Rouussanou and Agios Nikolaos Monasteries

Grand Meteora and Varlaam: the path goes up the densely wooded gully between the two rocks 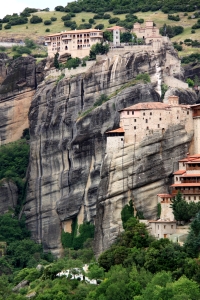 Roussanou and Varlaam: despite the appearance of the bedding in the rocks they are perched on completely separate pinnacles some distance apart 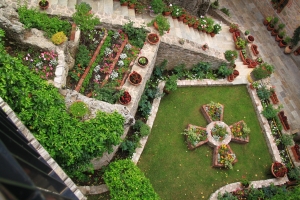 A new perspective on a rock garden: this is Holy Trinty Monastery garden

And there were lots more rocks.

Climbing high on the way up from Kalabaka

Looks like something created by the SFX boys for a SciFi film. But it’s not, it’s real. I think.

Another aside on the mass coach tourism issue.  These coaches and double-deckers park up on parts of the road near viewpoints obstructing other traffic while the hordes on board got off, walked back along the road by the score clicking away on mobile phones and cameras, posing liking models from Vogue in the foreground of ‘The View’.

A very good and interesting walk but it got me back to the hotel at 16.30, too early to finish the day’s activity, so I sat in the garden in the sun, had a coffee and cake, and then did another walk.  Circumnavigation of the Agio Pnevma (Holy Spirit) rock. Did it in less than an hour about which I was well pleased.

And then I showed myself up.  Badly!  I came upon a small group of French walkers who asked if they were on the right path to Kastraki.  They were and I wanted to tell them it was only a further 10 minutes.  But completely unbelievably I couldn’t remember the French word for 10 !!!!!!  I could only think of the Greek and then the German. I even thought of the English third!!!! When I started learning Greek I couldn’t think in Greek only in French.  What a change round!  I must be improving in Greek.  But what humiliation, having to speak to French people in English!!!!  Lots of exclamation marks there.

I had hoped to see storks when I was in this part of the world and today I did. Used to craning my neck to look up at the rocky crags as well as down to where my feet are trading, I spotted a pair of storks flying high overhead, circling in a thermal.  Interesting wildlife round here.

I guess it’s a stork but may be wrong