Meteora is visually iconic.  You see it and instantly recognise it, rarely by name or location but as “Oh! Yeh!  That place.  Didn’t they do a James Bond there once”.  It is like nowhere else.  Other countries have the odd monastery or castle on a rocky outcrop but as far as I know nowhere is there such a concentration of monasteries on the top of pinnacles of rock, precipitous and inaccessible on all sides.  Note that: on all sides.

When they were built, mostly around the 16th Century, the only way in to them was either to climb the vertical rock or by means of pulleys, ropes and rope baskets.  Apparently ropes were only changed when they snapped (no concept of routine or preventative maintenance in those days): pity the poor soul in the basket at the time.  Only in the 1930’s were steps cut to give access when the local bishop became concerned for the safety, and maybe the dignity, of his religious personage.  Now there are car parks with trinket stalls and vast numbers of people flock every day by the coach load from Athens, Thessaloniki and  islands within striking distance of the mainland.

The Rough Guide says get there early to avoid the crowds.  Must be joking!!!  The hotel I’m in is on the route to the monasteries, breakfast is served from 08.00 and when I sat down at 08.05 on Saturday morning coaches were already lumbering past on the uphill grind.

Saturday started grey and cool so I dressed and packed my rucksack accordingly.  Within half an hour the sky had cleared, the sun come out.  Back to the Greek weather I’m familiar with.  There is a very good book, “The Footpaths of Meteora” available locally and I had planned a route from it to just a few of the monasteries.

I didn’t intend to visit the inside of any of the monasteries over the weekend when they will probably be even more crowded than usual but just to  walk to a few of them and take photos of their dramatic settings.   So I did.  Twice.  It was clear that the best photos of a couple of them would be early evening when the sun had moved round further west.  Between the two visits there was another big thunderstorm but this time I managed to stay dry thanks to the massive branches of an ancient plane tree under which I sheltered for 40 minutes while it rumbled in the huge crags overhead.  One lightening strike was in the crags just behind me.

Enough of words.  From what I have seen so far Meteora is full of wonders.  Here are a few images attempting to do justice to this dramatic location.

All the rocks round here are named: this is ‘Doupiani’ the westernmost. Note the snow on the mountains in the background 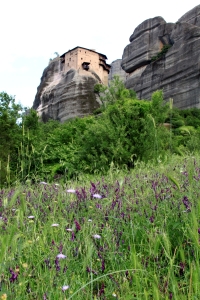 Looking up to Agios Nikolaos, the closest to Kastraki where I’m staying

Agios Nikolaos and the adjacent crags 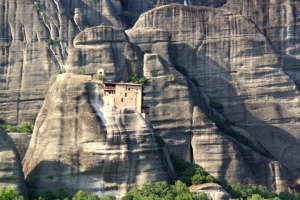 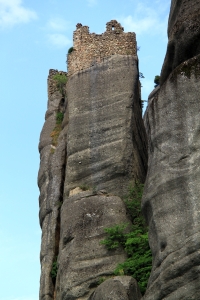 Close to Agios Nikolaos is the abandonned Agia Moni, I guess just too inaccessible to be viable

The entrance to ‘Grand Meteora’, with the ‘new’ steps to a rock-cut tunnel giving access to replace the old rope-and-basket ascent to the main tower

‘Grand Meteora’ is the most extensive of the monateries, occupying the whole of the couple of acres of the top of its pinnacle

It pays to look down as well as up: the size of this fellow is shown by the €1 coin alongside it. 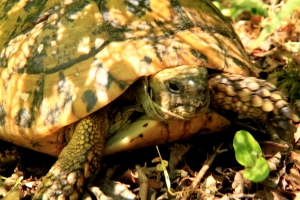 … and another view. Is he grumpy or aggressive? 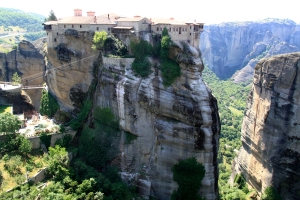 Adjacent to Grand Meteora is Varlaam

This view of Varlaam from the point the tortoise was hanging out: black thunder cloud approaching rapidly 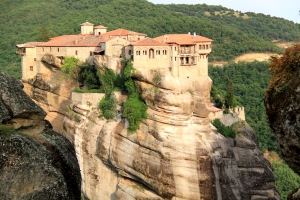 Another view of Varlaam in the post-thunderstorm evening light

The much photographed Roussanou Monastery 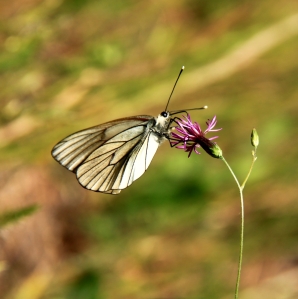 Again, it pays to take a break from craning your neck upwards and look at lower level.

Not so much publicised is the Monks’ Prison, set vertically into the cave in the rock named after the Holy Spirit 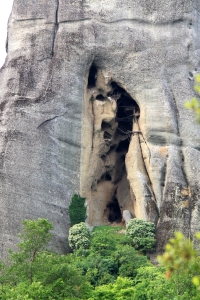 Close-up of the prison. If you click to enlarge you can still see the ropes and platforms in the upper reaches of the cave

And finally another strange one. This is the cave/hermitage of St George of the Kerchiefs. Every year on 23 April hundreds of youths climb the vertical crag to replace the pieces of cloth which are reputed to have gained healing properties.

This entry was posted in Greece and tagged Greece, Meteora. Bookmark the permalink.