A day out in Athens

Thursday morning and getting up at 07.30, the equivalent of 05.30 BST, didn’t hurt too much.  My body clock seems to adjust quickly, probably because I don’t go to bed until I’m very tired and then go to sleep instantly.

First thing was breakfast on the 7th floor terrace with views across rooftops directly to the Acropolis.  Unlike when I was here in 2010 there seem to be few people staying, probably an indication of hesitancy caused by the bad press Greece has been receiving of late.

Well breakfasted, the first task was to find the train station and suss out the train times for my trip north to Meteora.  I looked it up on the internet and then worked out a route with the aid of a street map.  The only problem was crossing the main roads which have large volumes of fast-flowing traffic and few crossing points.  Years of practicing in central Manchester when I was a teenager came in very useful, judging the speed of cars and how far apart they are and then taking a diagonal line across both flows, adjusting here for the fact that traffic drives on the right not the left.  Big roundabouts and urban dual carriageways present more of a challenge with no concession to pedestrians whatever.

Station ticket office reached and a combination of my Greek and their English got me a single to Kalabaka for tomorrow morning at 08.27 on train 884, window seat No 4 in Compartment B with 25% discount for being a  ‘Senior’.  I had forgotten to look up the word for ‘Old Codger’ so I just asked for the discount and told them my age.  The cost?  A princely €13.70 !!  Not bad for a 4½ hour journey.

That out of the way I then set out to visit the Acropolis again with the intention this time of circumnavigating it clockwise and visiting the Acropolis Museum en route.  Began by wandering the narrow streets and alleys backing onto the craggy hill.  It was reminiscent of the Hora of small islands like Symi, Amorgos and Tilos with which I’m more familiar.  So the camera clicked merrily away.

One of the alleys tucked under the Acropolis 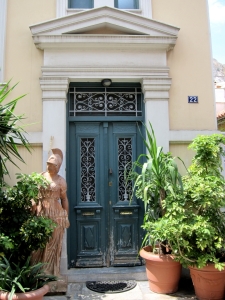 Door with guard outside

I had been told that the new Acropolis Museum was dramatic and it most definitely is.  The glass floor of the approach ‘path’ shows the archaeology still emerging beneath the massive new glass structure as the ‘dig’ and restoration continue. Being used to free museum entry in the UK I was doubtful about how much this visit was going to cost but plucked up financial courage, traumatic for an honorary ‘Cardi’, and was amazed when it turned out to be only €5.

Backpacks have to be left in a ‘cloakroom’ on the way in.  I don’t know whether that was in case anyone tries to rob-off with any the myriad smaller exhibits (all behind glass anyway) or whether they might knock into things.  But it was no inconvenience …. and free.  I soon found out that photography is only allowed on the top floor but, once up there, again the camera clicked away merrily.   Having a cup of espresso sitting on the roof terrace looking up to the Acropolis was a good end to the visit.   Very definitely worth the entrance fee.  As an aside, the loos on the top floor are probably the best you’ll encounter in Greece or anywhere else for that matter. 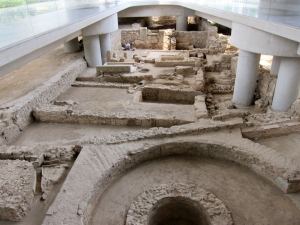 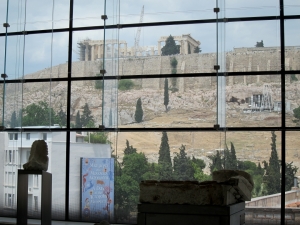 Looking from the top floor of the Museum to the Parthenon, the original source of the marbles 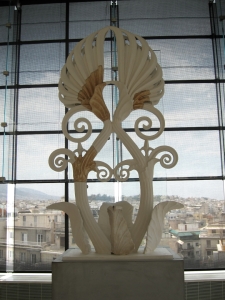 I continued the circumnavigation, including a visit to the Areopagus, the rocky lump of a hill overlooking the North West corner of the Acropolis where St Paul preached his Sermon on the ‘Unknown God’, and so highly polished by the passage of countless feet since then that there are written warnings to that effect.

The day was rounded off by meeting up for coffee with Theo, our old Greek tutor from Cardiff University Lifetime Learning course.  It was a great pity that he left, a great talent sorely missed, and it was good to meet up with him again.  He sends greetings to all those from the old class.

But I can’t finish the blog without mentioning one thing which has struck me today and that is the street art.  Well, not really street art as building art.  And vehicle art.  It may have been here in 2010 when I came but today is the first time I have noticed it.  There are now paintings on buildings all over the centre of the city.  Some just on doors or low level walls, some the full height of 6 or 7 story buildings.  Some is to my untutored eye good quality stuff, some is just graffiti scrawl.  And it seems that white vans are regarded as a blank canvas.  Very colourful, particularly so as much of it is in dilapidated areas of the city. 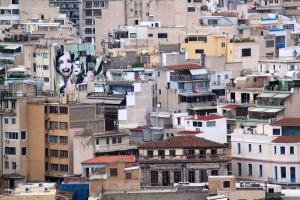 Same art viewed from the Areopagus

On the opposite side of Iroon Square 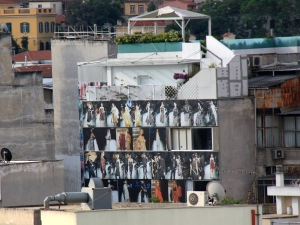 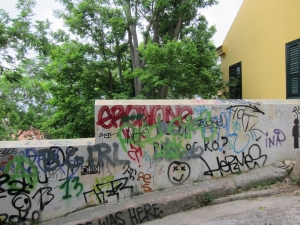 Some is just graffiti …. but very colourful

Wall art is not just modern, this is the wall of an old church

This entry was posted in Art, Greece and tagged art, Athens, Greece. Bookmark the permalink.

2 Responses to A day out in Athens