Taking another trip up to Abergavenny (almost)

I decided to celebrate Easter Monday by walking up the ridge towards Abergavenny again but this time dropping off the east side about half way along to have bean soup in the Goose and Cuckoo before walking back.

Just a bit of rambling before I get on with the walk.

The Goose and Cuckoo is a small pub hidden up the back lanes from Llanover village, just to the south of Abergavenny.  It’s on a dead-end road and is notoriously difficult to find.   It’s so difficult to find in fact that the first time I walked there along the mountain (admittedly in the dark) I got hopelessly lost and had to resort to finding a phone box and asking for help.  On several occasions I have arranged to meet people there who were arriving by car and who never turned up.  It is to this very isolation that the pub owes its existence.  This is because in the 19th Century the Lady Llanover, famous for her active support of the Welsh language, designing the ‘traditional’ Welsh costume (which she obliged her servants and visitors to wear on special occasions), and support of many aspects of Welsh culture and life ….. closed all the pubs on the very extensive Llanover estate  She was an outspoken critic of the evils of drink and the pubs just had to go.  So they did.  All except for the Goose and Cuckoo which was so hidden up back lanes that it alone survived the purge.

Back to the walk.  In a sense it was a bit of a mad decision in view of the impending doom threatened by a weather forecast of unremitting heavy rain.  When I could only go out walking at weekends I often went out in wet weather and had all the necessary walking gear to cope: waterproof boots; waterproof trousers; ‘stop tous’ to stop the rain wicking down my socks and dripping down into my boots; waterproof and breathable cag; peaked waterproof cap to keep the rain off my specs.  But now I can choose when to go out walking, and particularly since discovering the joys of walking with the sun on my back in Greece, I rarely walk in the rain.  I had to delve in the recesses of my little grey cells to remember where everything was and get my head round the different preparation procedure.

Another bit of a digression.  I’m a fairly orderly and methodical kind of bloke and when I put things away there is a logic to the places I put them.  The problem is that there are a number of different logics for every decision and it can be difficult to remember which logical process went on when I last used something.  There were at least 4 different places I could have put my peaked cap.  I know this because I found it in the fourth place I tried.  It makes it painfully slow getting ready for a walk when everything has to be tracked down.

But in the end I found it all and was ready to go.  It was grey and wet when I set off and when I got to the top of the ridge it was also very windy.  It got greyer, wetter and windier.  Not really a day for looking around and taking in the great views from the mountain top. First, there were no views except for the bit of rain sodden path in front to me.  Second it was head-down walking weather because of the horizontal rain that could take your eye out.

It took just under two hours to get to the Goose and meet up with my son Dai who had cycled there by a different route over the mountain.  The only people in the pub, we sat steaming in front of the wood-burning stove, had a bowl of the Goose’s famous bean soup, and then set off back.  The weather had not let up but now the strong Southwesterly wind was driving straight into my face.  I took a different route back to the lower level return-route I usually take, getting back onto the ridge top at an early opportunity to enjoy the full force of the weather rather than cowering in the woods below.

Altogether four hours walking.  My wet-weather gear had all worked well and I was dry on the inside.  It was exhilarating and there was the added satisfaction of having completed the walk in pretty atrocious conditions.

It came as something of a shock a few years ago when somebody told me I was weird because of the things I do.  Well, if overcoming difficult conditions and achieving something no-one else is prepared to do, then I put my hands up.  I’m weird.  And I’m proud of the fact that I have obviously transmitted that spirit of adventure and determination to my son.

Looking North along the ridge from the trig point: lost in the cloud 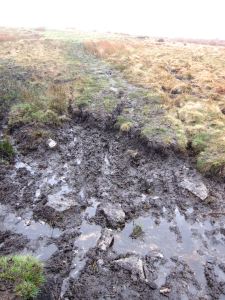 Illegal off-road motor bikes are wrecking the mountain: this is the main path along the ridge. 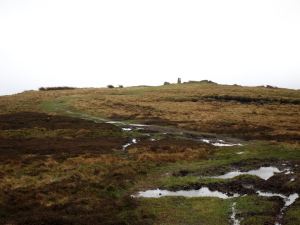 On the return leg the cloud base has lifted slightly but not a lot: the mountains behind are still lost to view.